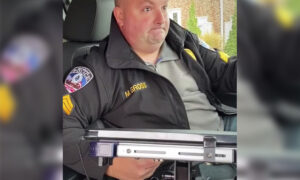 A 90-year old widow who was diagnosed with cancer in her uterus chose to spend the remainder of her life traveling the world instead of fighting the fatal disease.

Two days after Norma’s husband, Leo, died from cancer, a urine sample at the doctor’s office found evidence of a tumor in Norma’s uterus.

The doctor discussed the surgical treatments, as well as radiation and chemo, but Norma would have none of it.

Since August, she’s been traveling in an RV, touring the world, being driven by her son Tim and her daughter in law, Ramie.

Surprisingly, the doctor cheered her on.

“As doctors,” he said, “we see what cancer treatment looks like everyday. ICU, nursing homes, awful side effects and honestly, there is no guarantee she will survive the initial surgery to remove the mass. You are doing exactly what I would want to do in this situation. Have a fantastic trip!”

Since August, Norma has hit vacation spots from around the country, from taking hot air balloon rides in Palm Springs, California, to exploring Disney World in Orlando, Florida.


Norma keeps regular updates of her journey on her Facebook page, which has attracted a diverse groups of fans, among them cancers survivors, children whose parents died of cancer, and just ordinary folks who found her story inspirational.

“Miss Norma and family you are an inspiration – a lesson to us all -our time is precious we all need to share it with those we love,” wrote Sandra Thompson, from County Durham, England.

“Our hearts and minds have been blown! The love that the Driving Miss Norma Team has received from around the world has been astounding,” reads a recent Facebook update.

Norma will turn 91 years old in March. The full photographic archive of her travels can be found here.