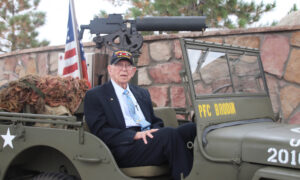 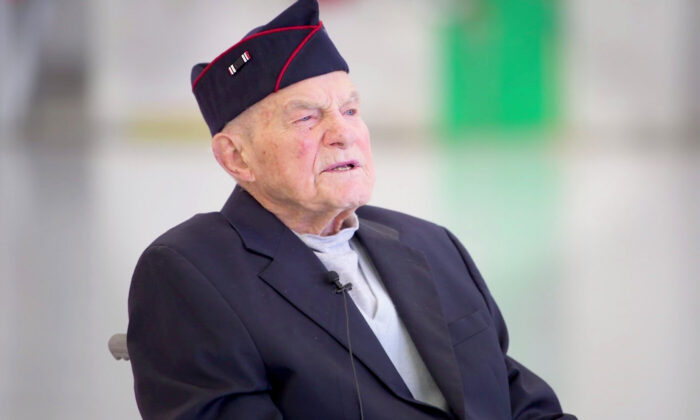 “The event that is happening here today is nearly 76 years late in coming,” he said during the award ceremony on Jan. 4 at Bradley Air National Guard Base in East Granby, Connecticut.

Daniel Crowley defended the Bataan Peninsula from invading Japanese forces, after which he was captured and kept as a prisoner of war. However, a technicality kept him from receiving the award that should’ve been his.

According to AARP, Crowley was assigned to the U.S. Army Air Corps at Nicholas Field in 1941. But when Japan launched attacks on Pearl Harbor and other military facilities throughout the Pacific, Crowley was moved to the infantry.

“He was a combat infantryman, but he didn’t sign up with combat infantry—he signed up with the Army Air Corps,” his wife, Kelley, told Uplifting Today.

It was a technicality that kept Crowley from receiving the Combat Infantry Badge until now, an award bestowed upon infantrymen and Special Forces members who served in active ground combat and who have the rank of colonel or below.

It was only recently that the Army decided to start giving the award to provisional soldiers, like Crowley, who fought on Bataan. Until now, Crowley didn’t think he’d ever receive the honor; but when he heard about this change a few months ago, he decided to apply for the award one more time.

“I wasn’t the only one, remember—there were thousands like me who were designated something else,” he said. “When the war started, they suddenly had to become infantryman, without any training.”

Not only did he receive the Combat Infantryman Badge, but Crowley was also given other awards for his time in the war camps in Japan.

After his capture in 1942, he was shipped from the Philippines to Japan on a ship with 300 other men. He describes this vessel as a “hell ship,” with horrible conditions akin to slave ships.

When they arrived in Japan, he was subjected to forced labor in some of the most dangerous copper mines in the country.

It was this experience that made officials decide to honor Crowley with the POW medal, as well.

Before giving Crowley the POW medal, Slavonic said, “It takes a very special person to continue to persevere through the most haunting of circumstances; it takes certain depth of character to put yourself in harm’s way for your fellow warriors and for your country.”

“When the Army began digging into Dan’s history and service, they uncovered that Dan was promoted to the rank of sergeant,” Slavonic added during the ceremony.

Even though Crowley had been promoted to sergeant, the order never reached him because he was honorably discharged and sent home.

“I have to say that to be able to do this today is a rare and humbling opportunity for me as the undersecretary of the Navy,” Slavonic said. “To be able to recognize Dan for his many sacrifices and accomplishments. He truly represents the members of the greatest generation who did so much and asked so little from their country.”