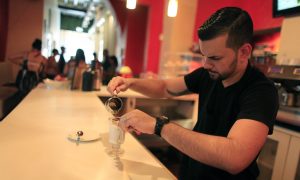 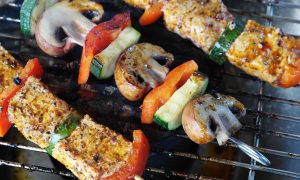 Healthy Grilling Tips to Minimize Carcinogens in Your Food
0 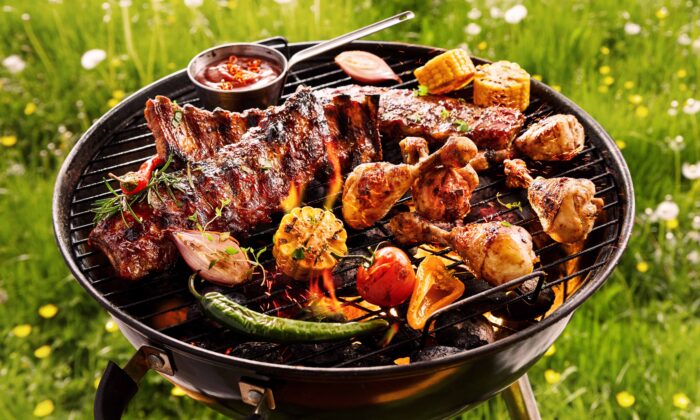 9 Grilling Tips for a Healthier BBQ

Three-quarters of American households own an outdoor barbecue grill. Before your next backyard barbecue, there are a few health concerns associated with grilled meat that you should be aware of. The health issues have to do with the charring of meat. Research has discovered two cancer-causing (carcinogenic) byproducts associated with the barbecuing of meat–including beef, poultry, lamb, pork, and fish. The first troublesome matter involves a well-known group of carcinogens called heterocyclic amines (HCAs).

HCAs occur when browning meat, whether it is cooked on an outdoor grill, in a hot frying pan, or broiling in the oven. HCAs form when high temperatures break down the amino acid creatinine, a chemical waste molecule generated from muscle metabolism.

One study indicated that a type of HCA called PhIP causes prostate cancer in rats. PhIP seems to initiate prostate cancer and increase its growth. Yet another study implicating PhlP showed that women who consumed the most well-done meat compared with those who ate less-cooked meat had a two-fold risk of breast cancer. It is difficult to determine exactly how much PhIP is in barbecued meat because different amounts are formed based on cooking conditions.

The second carcinogen associated with barbecuing is polycyclic aromatic hydrocarbons (PAHs). PAHs are formed when fat from meat drips onto the coal or hot surface, creating additional chemicals in smoke that is carried back to the meat. PAHs can also form directly on the food when it is charred. These substances are suspected of having estrogenic activity and can affect hormones and health. By the way, PAHs are formed even with the grilling of grass-fed organic beef.

In essence, the longer meat is cooked and the higher the temperatures, the more of these compounds are produced.

Recent research out of Mt. Sinai School of Medicine has found a link between eating animal products (including dairy products) cooked at high temperatures and elevated levels of AGEs, or advanced glycation end products. AGEs are a class of damaging compounds that build up in the body over time and are known to increase the risk of diseases like diabetes and Alzheimer’s.

Another problem with the BBQ is the grill itself. Inexpensive models use chrome-coated aluminum, which chips easily, leaving aluminum exposed on the cooking surface. Aluminum has also been implicated in the advancement of Alzheimer’s disease (Tomljenovic, 2011). Ensure your barbecue has a cast iron, stainless steel, or porcelain-coated grill instead.

Grilling meat can be made much safer by following these suggestions:

A marinade containing vinegar, olive oil, or citrus juices can protect meat and reduce harmful chemicals. In one study, beef steaks marinated with teriyaki sauce had 45 percent and 67 percent lower HCA levels at 10 minutes and 15 minutes of cooking time than unmarinated meat. Lower levels of HCAs were also observed in meat marinated with turmeric-garlic sauce. In contrast, marinating with barbecue sauce caused an increase in HCAs at 10 and 15 minutes.

The charred areas of foods are the main source of carcinogens (HCAs). Remove and discard any charred pieces of meat or vegetables. Also, flip the food frequently to prevent overcooking or charring on one side.

Fats dripping onto the grill produce PAHs, so trim extra fat off your meat to keep these carcinogens to a minimum. You’ll reduce your cancer risk and calories.

This keeps fat from dripping onto coals and causing flare-ups. Avoid stabbing meat with a fork as it causes fat to drip onto the coals.

5. Wrap foods in parchment paper (on the inside) and foil (on the outside).

This helps to keep food from burning, fat from dripping, and keeps smoke away from the meat.

Cancer-causing chemicals are created when food is grilled at temperatures over 302 F (150 C). Turn the heat down, or wait for charcoal to become low-burning (white) embers. Raise the grilling surface a little higher above the heat source.

Briefly sear meat on the outside leaving the inside more lightly cooked. Test the meat with a thermometer to determine when it is ready. The USDA Recommended Safe Minimum Internal Temperatures are:

The build-up from the bottom of your grill can be a source of cancer-causing agents. To clean your grill, turn up the heat to high and close the lid for about 10 minutes. Be sure to use an all-natural cleaning spray.

Whether at the cottage or right in your back yard, enjoy a season of healthy grilling. Choose lean, lightly-grilled meats, use marinades, and don’t forget the fruits and vegetables!

Lisa Roth Collins is a registered holistic nutritionist and the marketing manager at NaturallySavvy.com, which first published this article.