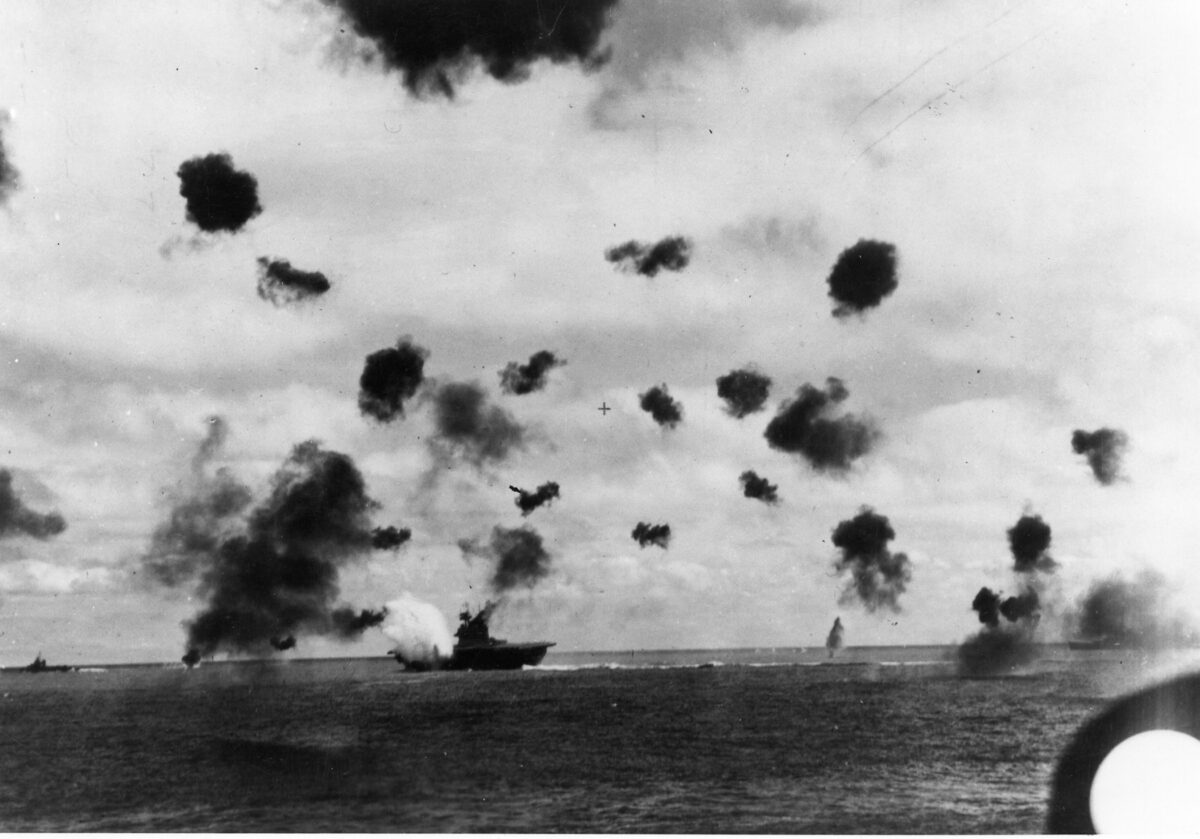 The USS Yorktown after it was hit by a torpedo during the Battle of Midway on June 4, 1942. (Courtesy of The National Museum of the Pacific War)
American Essence

Victory against Japan in World War II looked doubtful before Americans showed their capabilities and their moral fiber
BY Jeff Minick TIMEJune 27, 2022 PRINT

In the winter and spring of 1942, the armed forces of Imperial Japan chalked up victory after victory in the Pacific. But in the latter part of 1942, Americans began to turn the war in the Pacific around in our favor.

After their devastating attack on Pearl Harbor, the Japanese dispatched their fleets and armies into that vast ocean, battling American forces and their allies and taking control of seas, straits, and islands. Within a few months, they had seized places like the Philippines, Burma, the Dutch East Indies, Malaya, Guam, and Wake Island, all in a quest for oil and other natural resources. It was the equivalent of the German blitzkrieg, or “lightning war,” only these assaults were launched across thousands of miles of water.

By late February, Japan was fighting its war on a front that was 3,000 miles deep and 7,500 miles broad. Its navy even managed to get a submarine within a few miles of the California coast, where it shelled an oil field on the Ellwood Cooper Ranch in hopes of causing a massive explosion. That attempt failed, but the Japanese had managed to strike the continental United States.

During these dark days, thousands of American soldiers, sailors, and airmen lost their lives in combat. Thousands of others became prisoners of war. On May 6, for example, when General Jonathan Wainwright surrendered his starving garrisons in the Philippines, the Japanese scooped up more than 11,000 American combatants.

Yet hindsight in history, as in sports, makes outcomes seem inevitable. We won the war against Japan—but we may forget that it was touch-and-go in those early days.

“At the beginning of 1942, it was not a foregone conclusion that the United States could win the war,” says Reagan Grau, who is the director of Collections and Exhibits at the National Museum of the Pacific War in Fredericksburg, Texas. “The Japanese were attacking all over the place. They were chasing the Asiatic fleet off out of the Pacific or sinking its ships outright. It was not conclusive that we could win this war.”

A Sleeping Tiger Wakes Up

Both Tokyo and Berlin underestimated the capabilities and moral fiber of their American opponents.

The attack on Pearl Harbor shocked Americans, but it also left them enraged. There were a few dissenters and war protesters, but the great bulk of the citizenry called for revenge. Men and women jammed recruiting stations, seeking to join the armed services. Others soon organized scrap metal drives and grew “Victory Gardens,” and an army of women eventually worked in defense plants.

And as Wilfred McClay tells us in “Land of Hope: An Invitation to the Great American Story,” those plants quickly began producing the armaments that would win the war. By the end of 1942, “American arms production had risen to the same level as that of Germany, Italy, and Japan put together.” Two years later, our factories and shipyards had doubled that amount of weaponry, all while some 16 million Americans were serving their country in uniform. According to McClay, among these military products were 280,000 aircraft, 86,000 tanks, and 8,800 ships.

The quality of our machines of war also improved. “At the outset of the war, it was abundantly clear that the Japanese had better airplanes than the Americans,” says Grau. “They had a definite advantage in the air, which was important because of the expanses in the Pacific.” Over the next two years, that inferiority of our aircraft changed dramatically.

Used by our allies as well as by our own military, these weapons of war proved decisive in the war against Japan.

In those early days of setbacks and defeats, many Americans in uniform shocked the Japanese by their valor and their fighting spirit. Accounts of their courage and sacrifices abound.

In the Philippines, for example, Capt. Arthur Wermuth, later called the “One-Man-Army of Bataan,” went out on raids behind Japanese lines, where he conducted a private war and killed 116 enemy combatants. Second Lt. Alexander Nininger in hand-to-hand fighting attacked several enemy positions, killing many of their defenders and disrupting a Japanese attack. He was killed in this battle and was later found with three dead Japanese soldiers beneath him. He received the Medal of Honor posthumously, the first to receive that honor in the war.

In February, Lt. Edward H. O’Hare spotted nine Japanese Mitsubishis coming for the aircraft carrier USS Lexington. He immediately flew his plane into the attackers, shooting down five enemy aircraft and at one point chasing them through his own antiaircraft fire. Like Nininger, he also won the Medal of Honor, the first one awarded to the Navy. He fought other aerial combats for almost two more years before being shot down and killed during the battle of Tarawa.

Such men not only proved their mettle to the enemy but also brought hope and inspiration to those on the home front.

Their speedy victories in these first months of the war left the Japanese haughty and overconfident, and their government decided to advance their military forces into the South Pacific, aiming to isolate Australia and to strike Hawaii again to cripple the American efforts to rebuild ships there. They seized islands west of Hawaii like Guam, the Solomons, and even part of New Guinea, all in their hopes of cutting off Australia.

Their tactics worked—they captured the islands and enlarged their empire—but the overall strategy left them with extended lines of supply. Later, Gen. Douglas MacArthur came up with “island-hopping,” a plan of action in which some Japanese posts were not directly assaulted but were instead bypassed by American forces, leaving them cut off to wither on the vine from lack of supplies.

From the very beginning of the war, with the “Death March” on Bataan during which American and Filipino prisoners of war were executed by mistreatment or by a bullet to the head, the Japanese practiced a warrior code, “Bushido,” which was incomprehensible to the men fighting them. The Japanese willingness to die for their emperor, as evidenced by their infantry suicide attacks and later by kamikaze aircraft against U.S. ships, and their contempt for those who found no dishonor in surrender resulted in vicious, brutal combat unknown in the European theater. More importantly, had the Japanese treated those peoples whom they had conquered with more consideration and respect, they might have gained allies rather than bitter enemies.

“I don’t know that we Americans really understood the importance of the aircraft carrier at the beginning of the war as to who was going to be victorious,” Reagan Grau said. “Right after Pearl Harbor, the Pacific Fleet was pretty banged up, with battleships damaged or sunk, and so we had to rely on carriers. It quickly became apparent that battleships were becoming obsolete, replaced by the air power of the carriers.”

That this was true became abundantly clear during the Battle of the Coral Sea (May 4–8, 1942) and the Battle of Midway (June 4–7, 1942), when U.S. carriers first blunted a Japanese attack and then, at Midway, sunk four Japanese carriers, killing many experienced pilots and leaving their fleet crippled for the remainder of the war. A good number of American pilots lost their lives that day as well, many of them flying aircraft inferior to those piloted by the Japanese.

Though the war would continue for over three more long years, Midway was the beginning of the end for Japan’s Pacific Empire.

In his “Carnage and Culture: Landmark Battles in the Rise of Western Power,” Victor Davis Hanson devotes a chapter to Midway and the American pilots. He recounts story after story of bravery and self-sacrifice, of young men who willingly fought and gave their lives often knowing that the odds of their survival were stacked against them.

At one point Hanson writes that these airmen “were not all eighteen-year-old conscripts, but often married and with children” who were willing to “fly their decrepit planes into a fiery end above the Japanese fleet, in a few seconds to orphan their families if need be to defend all that they held dear. One wonders if an America of suburban, video-playing Nicoles, Ashleys, and Jasons shall ever see their like again.”

One way that we can attempt to see their like again is by remembering and honoring these heroes.