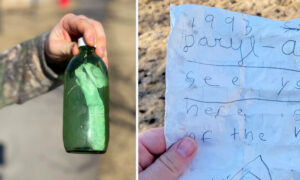 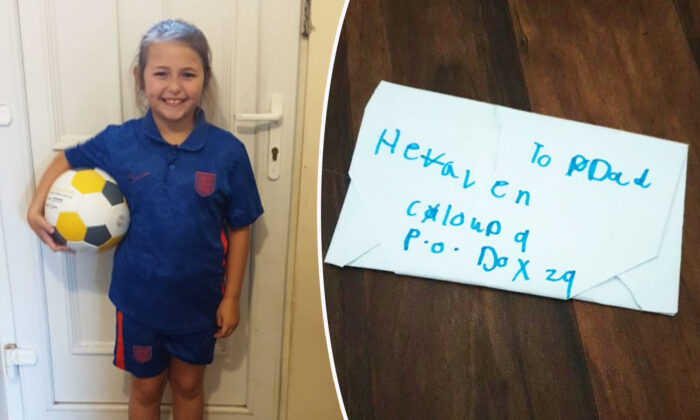 As sons, daughters, and wives across the globe celebrated Father’s Day on June 20, 8-year-old Sianna Tully from the UK was missing her dad, who’d passed away when she was just 4 months old.

Unable to spend time with her dad that day, the girl from Braunstone, Leicester, chose to write him a letter instead—which garnered an unexpected response.

When it came to write the address on the envelope she’d made by hand, Sianna asked her mom, Sarah, where to send it.

“Sianna just came into the room that evening and asked ‘where does Daddy live?’ so she could write the address to a letter she had written,” the mother of two told LeicestershireLive.

Sarah quickly came up with an answer to satisfy her daughter: “Heaven, Cloud 9.”

The mom told the media that Sianna copes with the loss of her father, Tony, by writing him letters on Christmas, birthdays, and Father’s Day.

After addressing the letter, they dropped it in the mailbox near their home; and on the following Monday, the letter was found by a postman named Simon—who realized that without any postage, it would likely end up in the trash and decided to intervene.

“Obviously, without a stamp or an actual address on it, if it got put in with the rest of the stuff to be delivered, it would just end up getting thrown away in transit somewhere,” he told the BBC.

“I spoke to my manager and asked if I could try to get hold of the family to find out more about it and get it back to them.”

Simon (who chose to withhold his last name) took a photo of the letter and posted it on Facebook, hoping to locate the sender—while also revealing a loss of his own.

“I’m a postman in the Braunstone area,” he captioned. “Earlier today I emptied the red pillar box on Bewicke Road and there was a letter in a child’s handwriting addressed to their dad in Heaven, Cloud 9.

“I’m trying to find the parents of the child as I would like to reach out to them and with their permission sort out a little something for the child.

“I myself lost my dad last year and as an adult found it hard, so I can only imagine what this child is going through.”

The heartrending post soon went viral with thousands of Facebook users commenting. And within 15 minutes of it being posted, notice reached Sarah after she was tagged dozens of times.

The mom was taken aback by the astounding number of moving comments.

“I am absolutely overwhelmed by the response of the postman and of everyone who has seen the post,” she said.

“I haven’t stopped crying since. I never thought for one second that anyone would find it or do anything with it.”

The postman and Sianna even got a chance to meet up the next day; the letter was returned to the family, and he even gifted her a father-daughter figurine as a keepsake.

Mom Sarah plans to hold onto them in a box for her daughter for when she’s older—along with printouts of all the heartwarming comments the letter received.

As for the contents of that letter, Sarah says, “I have no idea what is in it, I always say that’s between her and her dad.”