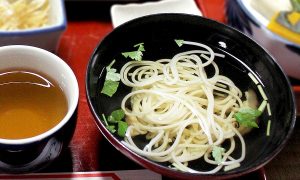 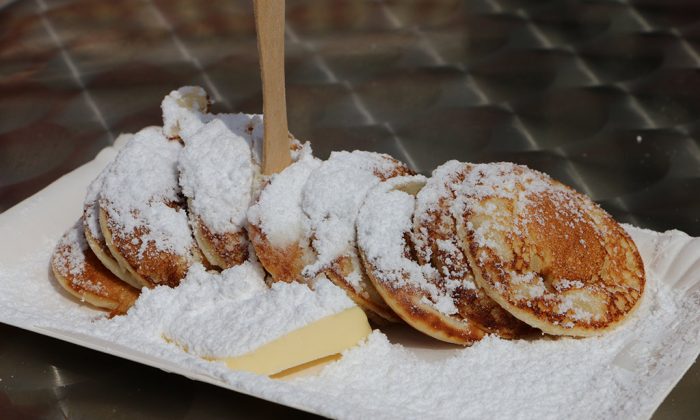 Before heading to the Netherlands, I knew absolutely nothing about Dutch food. There’s not very much written about it and I actually had never given much thought as to what they’d eat there.

Since leaving the Netherlands, all I want to eat is Dutch food.

I was quite surprised to find that their most of their food was light and healthy– at least when compared to some of the other countries we went to. (Goulash everyday anyone?) It was all about the fresh markets, daily squeezed fruit juices and perfect looking produce.

We noticed if anything was unhealthy, it generally came in small, bite-sized portions that you could share, which was perfect.

So if you’re heading to the Netherlands and have no idea what to eat, here are 8 must-try Dutch foods:

These treats look like tiny pancakes, but I assure you, they’re amazing. Made from flour and buckwheat, these are softer and fluffier than pancakes anywhere else. You get a stack of them per one order and you can also choose from a variety of toppings. The most common topping is powdered sugar, but they also have syrups, chocolate sauce and even Grand Mariner for those looking for a little extra kick.

A type of soused herring, this snack can only be enjoyed in the early summer months (but don’t worry, normal soused herring can be enjoyed all year-round) when the herring is still considered young. This raw fished is typically enjoyed with freshly chopped onions and a pickle. I know it might not sound that appetizing but don’t knock it until you knock one back. The best way to eat this snack is by tilting your head back, and dropping the fish by its tail into your mouth!

Imagine taking two massively thin, yet crispy, waffles and gluing them together with a warm caramel-y syrup– that’s a stroopwafel. These are sold everywhere, including packaged versions at grocery stores, but they’re best when eaten warm and gooey from a street vendor. They’re so huge they’re perfect to share, as I had a hard time finishing one of my own.

Forget french fries, and go for ‘Dutch fries’ instead. If there was one snack we saw being sold all across the country that people of all ages couldn’t seem it get enough of, it would be fries. Made fresh in front of you, these fries were perfectly crispy on the outside, yet warm and potato-y on the inside. The most common way to eat them is called patatje oorlog, which entails a drowned mess of peanut sauce, mayo and chopped onions, but if you’re not a big fan, getting them simply with ketchup is just as satisfying.

A savoury snack, this is the Dutch version of croquettes. Filled with a creamy meat-ragout, these deep fried balls of goodness are sold at almost any bar or cafe and paired with a mild mustard sauce for dipping. Despite the name, these balls are not at all bitter, but rather they used to be served with bitters– although nowadays they seem to go just as well with a beer instead.

One of my personal favorites, this treat is especially addicting. I’m not exactly sure what to call this dessert, as it’s somewhere between a cake and a pie, and I’m not a huge fan of either of those things, but this dessert is magical. With really fresh apples and cinnamon, it’s easy to eat a whole slice yourself even though servings are huge. We tried many shops throughout the Netherlands, but our favorite had to be Winkel in Amsterdam.

Due to their previous relations, Indonesian flavor has snuck into many common Dutch dishes. You’ll find plenty of Indonesian restaurants around town, but one of the most popular snacks is a type of satay, which is just sold on the street. Like normal satay, you’ll be given a choice to try many toppings, but the traditional peanut sauce is a must!

The Dutch are famous for many types of cheeses like Gouda and Edam, so when in the Netherlands, be sure to get your fix. You’ll find it being sold at any market, but many shops will even offer tastings where you can try unique combinations like pesto cheese or almond cheese. I recommend going for a variety that you’ve never heard of, and you might just be surprised.