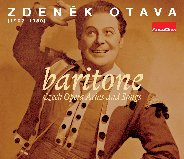 “Zdenek Otava: Baritone” is a 2-CD/1-DVD set (on ArcoDiva) of a superb singer, who is unknown in the United States. Otava (1902–1980) was a star in his native Czechoslovakia for half a century, but his name doesn’t even appear in any of my reference books on classical music or opera. Perhaps politics had something to do with it since he lived through the Nazi and Soviet eras.

As a boy in secondary school, Otava sang in the choir of the Old Brno Monastery. He was given his entrance exam by none other than Leos Janacek. The noted composer praised the 10-year-old as a “skylark.” Neither could have known that the youngster would eventually become an important interpreter of Janacek’s work (including the world premiere of “The Makropoulos Case” and the Prague premiere of Janacek’s last opera, “From the House of the Dead”).

Otava made his operatic debut in 1923, playing Iago at the National Theater in the Slovak capital of Bratislava when he was 23 years old. A critic is quoted in the liner notes as observing: “If it is true that this was the first time Otava had stood on the stage, then this young singer is phenomenal. Otava has a very substantial voice, ringing and of wide range, which has been through a good school and, if it continues to develop the same way, could soon become the most beautiful voice on the continent.”

He eventually moved to the National Theater in Prague, where he remained for 43 years.

The set (with recordings from the period 1945–1967) shows why he was treasured. He had taste, style, and a gift for characterization. All the accolades the critic remarked on at his debut are in evidence here and are remarkably the same in the earliest and the latest recordings. Otava’s voice was solid throughout his ample range, and his exquisite vocal shadings delineate the different characters and situations.

He performs some of the most familiar Italian arias, but following the custom of the time in Europe, the texts are sung in the local language, which in this case was Czech. Some are duets (for example, from “Don Pasquale,” “Rigoletto” and “Il Trovatore”) and present other important singers of that era.

I was quite taken with the sopranos Maria Tauberova on the first two and Ludmila Dvorakova on the third. (The latter went on to an international career and even sang at the Metropolitan Opera.)

The set begins with a smooth rendition of Mozart’s “Hai gia vinta la causa!” from “The Marriage of Figaro” (in which Otava plays Count Almaviva) followed by a sparkling “Largo al factotum” from Rossini’s “Barber of Seville.” He switches gears for the sober aria from Rossini’s “William Tell” where the archer tells his son to remain still when he aims an arrow at the apple on the boy’s head.

There is a generous selection of Verdi arias, ranging from the anguished hunchback Rigoletto to Count di Luna in “Il Trovatore” singing of his love for Leonora (whom he is planning to abduct), to Iago expressing his creed of evil in “Otello,” to the elderly Germont in “La Traviata” trying to console his son whose lover, Violetta, has left him (at the old man’s urging), to the jealous Renato’s “Eri Tu” from “A Masked Ball” in which he resolves to assassinate the king for seducing his wife.

The second disc begins with Italian verismo (the Prologue to “I Pagliacci” and Scarpia’s “Te Deum” scene from the first act of “Tosca”), followed by two duets from Tchaikovsky’s “Eugene Onegin.”

The rest of the CD is from operas by Czech composers, some well-known (Smetana and Dvorak) and the others obscure (Fibich, Kovarovic, Novak, and Krejci). Even the Smetana and Dvorak operas are not performed in this country.

The liner notes contain a biography of Otava and details about each of the pieces but not the translations of the arias. It is apparent that the singer is adjusting his sound to fit different characters, but it would be helpful to know what he was singing. This is not a problem with the Italian and Russian operas, which are well known, but the Czech pieces are completely unfamiliar.

The set also contains a tantalizing DVD with additional arias and songs, but unfortunately it would not play on my equipment. In any event, I am grateful for the opportunity to discover a singer whose appeal is not limited to his native country.