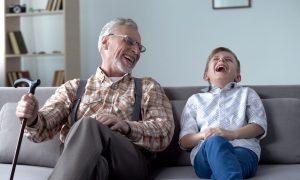 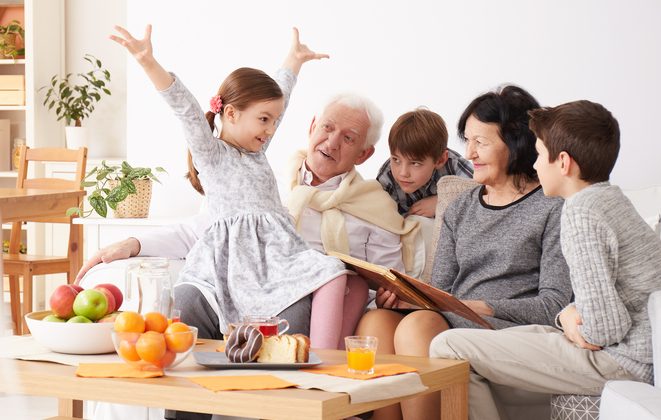 To make visits with grandchildren a pleasure rather than a pain, it's helpful to be considerate of their parents. (Photographee.eu/Shutterstock)
Family & Home

7 Tips on Visiting the Grandkids

“The reason grandparents and grandchildren get along so well is that they have a common enemy.”

Parents bear the primary responsibility for raising children, guiding them toward adulthood. Day in and day out, they are with their kids, changing diapers, instructing them a thousand times—sometimes literally—to put their napkins in their laps, bailing them out of trouble at school, checking their homework, washing their clothes, cooking for them, scrutinizing their friends, and hauling them around town to activities such as dance and soccer. Good parents are a mix of Santa Claus and Marine Corps drill instructor.

A grandparent is far more Santa than drill instructor.

Grandparents slip the kids gum and candy, play blocks and Lincoln Logs with them while Mom is folding clothes and washing dishes, take them on walks, and regale them with stories of how their dad misbehaved when he was young. When they slip away to their lives back in Miami or Dubuque, grandparents leave the house as heroes in the eyes of their grandchildren.

Sometimes, of course, such visits become battlefields. The parents resent criticism directed at the way they are raising their children. The grandparents become upset when their sons and daughters refuse to heed their advice. The kids caught in the middle of this fracas are baffled by the tension.

The ideal arrangement, of course, is to have all three parties—grandparents, parents, and grandchildren—as allies, not enemies.

Before offering some thoughts from a grandparent’s point of view about forging that alliance, let me share my credentials. My parents and my wife’s parents used to visit us frequently. Sometimes, they criticized our parenting style or our decision to homeschool our children. Those criticisms stung. Now, I am in their shoes, a father of four, with 20 living grandchildren, all under the age of 15. For three years, I have lived in the basement apartment below my daughter’s large family, and I often spend time with my sons and their wives and children.

Believe me when I say that in the grandparent game, I have hit the canvas more times than a punch-drunk pugilist.

Here are seven tips for making visits with grandchildren a pleasure rather than a pain. For simplicity’s sake, I am using a generic daughter, Miranda, as the parent in my examples. Please don’t mistake this fictional wife and mother for my daughter.

Remember Where You Are

The rules of your home don’t apply to the home of your daughter, her husband, and her children. You used to give Miranda a nightly bath; she bathes her children every three days. You overlooked messy bedrooms; Miranda makes her children put away their toys and clothes before bedtime. Best to steer clear of such differences.

You walk into the kitchen, where Miranda and the kids are cleaning up the lunch dishes, and say, “Hey, how about if I take the kids to the park and then get some ice cream?” The grandkids clap and cheer, but you’ve put Miranda on the spot. She has other plans for the kids that day, and when she must say no, you have just made her the “bad guy.” If you want to take your grandchildren to a movie or spring for a trip to the doughnut shop, speak first to Miranda in private.

When my wife and I were raising our children, my mom would visit and would compliment us on what great kids we were raising. All well and good. Somehow, Mom never connected our children’s behavior with their home education. Sometimes, within an hour, she would tell me that we should stick our children into school so that we could pay more attention to the operation of our bed-and-breakfast and bookstore. Her remarks hurt. Tread lightly here.

Avoid Correcting Your Grandchildren Except in Dire Circumstances

If you criticize your grandchildren for such things as their table manners, their dress—“Blue and green don’t match”—or their squabbles over a toy, your daughter and son-in-law may take those corrections as reflections on their parenting. Only if you see the 3-year-old running with a pair of scissors, or the 8-year-old, baseball bat in hand, chasing his younger brother with the intent of committing bodily harm should you interfere.

Never Openly Side With the Grandchildren Against Their Parents

Your daughter orders the children to turn off the television. They whine in protest, begging for “one more show.” She insists, and then you step into the skirmish. “Oh, come on, Miranda, what could one more show hurt?” You have just made yourself popular with the Paw Patrol crew, but you have also made your daughter the common enemy. If you must say something, present the grandkids’ case in private to your daughter.

Miranda is—and will always be—your daughter. Many times, parents need a sounding board, a person who knows them intimately and who will listen when they need to talk over their frustrations or troubles. Paying attention to others is a rare and valuable skill. Hone that skill, and you become a trusted confidante and friend.

Help Without Asking to Help

Whenever you ask Miranda if you can do anything for her, she inevitably says, “No, I don’t think so.” Nonsense. Dishes fill the sink, the flowerbeds need weeding, and the little ones are once again on the verge of their pre-supper meltdown. Instead of asking how you can help, just say “Hey, Miranda, I thought I’d read the kids a story” or “I need to get outside. Where are the hedge clippers?”

Oh, and one more tip: Hugs. Lots of hugs all around.