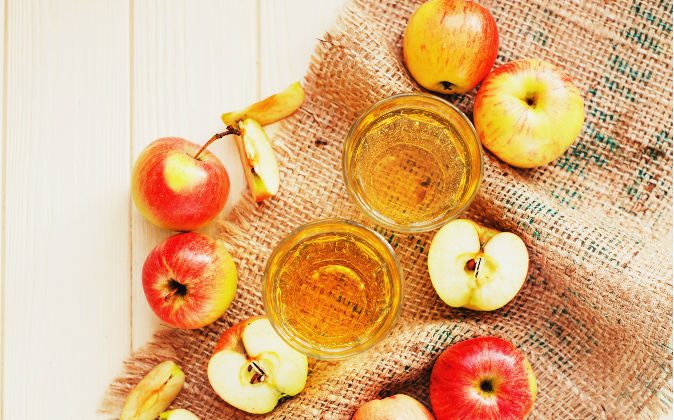 7 Side Effects of Too Much Apple Cider Vinegar

It has several health benefits that are supported by scientific studies in humans.

However, people have also raised concerns about its safety and possible side effects.

This article takes a look at apple cider vinegar’s potential side effects.

It also provides instructions on how to consume apple cider vinegar safely.

What Is Apple Cider Vinegar?

Apple cider vinegar is made by combining apples with yeast.

The yeast then converts the sugar in the apples into alcohol. Bacteria are then added to the mixture, which ferment the alcohol into acetic acid.

Acetic acid makes up about 5–6% of apple cider vinegar. It is classified as a “weak acid,” but still has fairly strong acidic properties when it is concentrated.

Although small amounts are generally fine and healthy, taking too much can be harmful and even dangerous.

In addition to acetic acid, vinegar contains water and trace amounts of other acids, vitamins and minerals.

7 Side Effects of Apple Cider Vinegar

Unfortunately, apple cider vinegar has been reported to cause some side effects.

This is particularly true in large doses.

Although small amounts are generally fine and healthy, taking too much can be harmful and even dangerous.

Apple cider vinegar helps prevent blood sugar spikes by reducing the rate at which food leaves the stomach and enters the lower digestive tract. This slows down its absorption into the bloodstream.

However, this effect may worsen symptoms of gastroparesis, a common condition in people with type 1 diabetes.

Symptoms of gastroparesis include heartburn, bloating and nausea. For type 1 diabetics who have gastroparesis, timing insulin with meals is very challenging because it’s hard to predict how long it will take food to be digested and absorbed.

One controlled study looked at 10 patients with type 1 diabetes and gastroparesis.

Drinking water with 2 tablespoons (30 ml) of apple cider vinegar significantly increased the amount of time that food stayed in the stomach, compared to drinking plain water.

Bottom Line: Apple cider vinegar has been shown to delay the rate at which food leaves the stomach. This may worsen symptoms of gastroparesis and make blood sugar control more difficult for people with type 1 diabetes.

Apple cider vinegar may cause unpleasant digestive symptoms in some people.

Human and animal studies have found that apple cider vinegar and acetic acid may decrease appetite and promote feelings of fullness, leading to a natural reduction in calorie intake.

However, one controlled study suggests that in some cases, appetite and food intake may decrease due to indigestion.

The people who consumed a drink containing 25 grams (0.88 oz) of apple cider vinegar reported less appetite but also significantly greater feelings of nausea, especially when the vinegar was part of an unpleasant-tasting drink.

Bottom Line: Apple cider vinegar may help reduce appetite, but may also cause feelings of nausea, particularly when consumed as part of a drink with bad flavor.

There are no controlled studies on apple cider vinegar’s effects on blood potassium levels and bone health at this time.

However, there is one case report of low blood potassium and bone loss that was attributed to large doses of apple cider vinegar taken over a long period of time.

A 28-year-old woman consumed 8 oz (250 ml) of apple cider vinegar diluted in water on a daily basis for six years.

She was admitted to the hospital with low potassium levels and other abnormalities in blood chemistry.

What’s more, the woman was diagnosed with osteoporosis, a condition of brittle bones that is rarely seen in young people.

Doctors who treated the woman believe the large daily doses of apple cider vinegar led to minerals being leached from her bones to buffer the acidity of her blood.

They also noted that high acid levels can reduce the formation of new bone.

Of course, the amount of apple cider vinegar in this case was much more than most people would consume in a single day — plus, she did this every day for many years.

Bottom Line: There is one case report of low potassium levels and osteoporosis likely caused by drinking too much apple cider vinegar.

Acidic foods and beverages have been shown to damage tooth enamel.

Soft drinks and fruit juices have been more widely studied, but some research shows the acetic acid in vinegar may also damage tooth enamel.

In one lab study, enamel from wisdom teeth was immersed in different vinegars with pH levels ranging from 2.7–3.95. The vinegars led to a 1–20% loss of minerals from the teeth after four hours.

Importantly, this study was done in a lab and not in the mouth, where saliva helps buffer acidity. Nevertheless, there’s some evidence that large amounts of vinegar may cause dental erosion.

A case study also concluded that a 15-year-old girl’s severe dental decay was caused by consuming one cup (237 ml) of undiluted apple cider vinegar per day as a weight loss aid.

Bottom Line: The acetic acid in vinegar may weaken dental enamel and lead to loss of minerals and tooth decay.

Apple cider vinegar has the potential to cause esophageal (throat) burns.

A review of harmful liquids accidentally swallowed by children found acetic acid from vinegar was the most common acid that caused throat burns.

There are no published cases of throat burns from apple cider vinegar itself.

However, one case report found that an apple cider vinegar tablet caused burns after becoming lodged in a woman’s throat. The woman said she experienced pain and difficulty swallowing for six months after the incident.

Due to its strongly acidic nature, apple cider vinegar may also cause burns when applied to the skin.

In one case, a 14-year-old girl developed erosions on her nose after applying several drops of apple cider vinegar to remove two moles, based on a protocol she’d seen on the internet.

In another, a 6-year-old boy with multiple health problems developed leg burns after his mother treated his leg infection with apple cider vinegar.

There are also several anecdotal reports online of topical burns from apple cider vinegar to the skin.

Bottom Line: There have been reports of skin burns occurring in response to treating moles and infections with apple cider vinegar.

A few medications may interact with apple cider vinegar:

Bottom Line: Some medications may interact with apple cider vinegar, including insulin, digoxin and certain diuretics.

Most people can safely consume reasonable amounts of apple cider vinegar by following these general guidelines:

Bottom Line: To consume apple cider vinegar safely, limit your daily intake, dilute it and avoid it if you have certain conditions.

However, to stay safe and prevent side effects, it’s important to monitor the amount you consume and be careful with how you take it.

While a small amount of vinegar is good, more isn’t better and may even be harmful.

This article was originally published on www.authoritynutrition.com Read the original here.