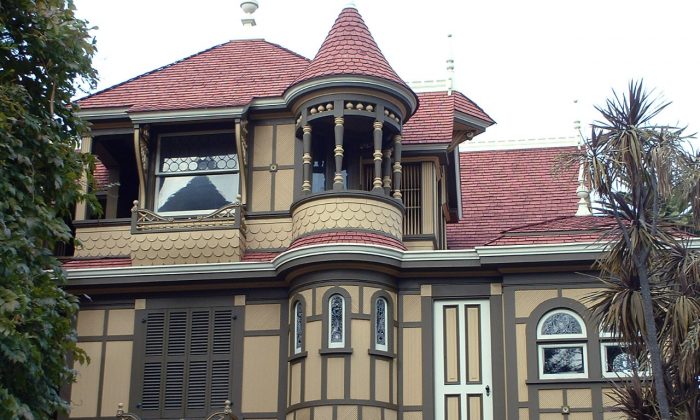 The story of the Winchester House is scary and bizarre as the house itself. It was built by a Sarah Winchester, a widow of William Winchester, one of the Winchesters of the famous rifle company. After a few happy years of marriage, one tragedy followed the other: their baby daughter died, and some years later Mr. Winchester died, too.

Desperate and crushed, Mrs. Winchester communicated with a psychic, who explained the disasters to be the revenge of all the souls killed by Winchester guns. To escape the curse and ghosts, the psychic told her to move West, start building a house and never stop.

That’s how many bizarre hidden staircases leading nowhere, doors opening to the wall, and a secret wine cellar came to be built.

Before Frederick Bourne, president of the Singer Sewing company, built the Singer Castle in 1896, he had purchased the of whole Dark Island in the middle of the St. Lawrence River in New York. He had to bring tons of granite from nearby Oak Island to construct what later became a magical place, with a secret passage behind the bookcase, a painting that allows owners to spy on guests, and a wine cellar hidden for those who don’t know where the secret button is.

And there’s more: underneath the castle is a system of tunnels connecting smaller buildings on the island. It’s a real life mystery castle.

If you ever wondered whether the Ultima games developer has a secret dungeon in his house, just as his characters do, the answer is yes.

The Truth About Secret Societies

Richard Garriott’s home has even more: a three-story spiral staircase in its center with hidden rooms placed randomly. You can only guess if the room behind a door will be a wine cellar, a dungeon, or a science room.

There were passageways that saved the lives of many. One of the most famous is in the house owned by the ten Boom family in the Netherlands.

When the youngest member of the family got involved in the Dutch Underground in 1940, an architect built a secret chamber in her room, hidden behind the walls. Many Jews actually lived there until the home was raided in 1944.

It seems like passageways are either connected to a terrifying mystery or a death. Yet it is not the case in the 17th century Mont Saint-Odile castle, although there is some mystery there for sure.

In 2002, valuable books in a convent’s library started to disappear. After the police installed cameras, the whole mystery got even more interesting. They saw a man appear from a wall, make his theft, and disappear the same way.

Eventually, the police found out that the man was student Stanislas Gross, who was using a forgotten secret passageway behind the bookshelf in the library. According to some sources, he found a map showing not just a secret chamber but also a hidden mechanism for opening it. He would walk in the convent during the day with tourists, and sneak to the library through the passageway at night. Luckily, almost all of the valuable books were returned.

What looks from the outside to be a perfectly normal family house in Aspen, Colorado, is actually a well-organized system of 1,700 feet of secret passageways. Imagine, that’s nearly six football fields put together. The house itself is filled with file cabinets that are actually doors and dresser drawers that serve as a passageway. It even has a “Room of Doom” that leads to a ledge behind a waterfall.

Not only that, but it has 1,100 square feet of catacombs accessible only by pushing unnoticeable latches and buttons. Not surprisingly, the owner of the house, Doug Carlston, is a computer games developer behind a ’90s classic Myst video game.