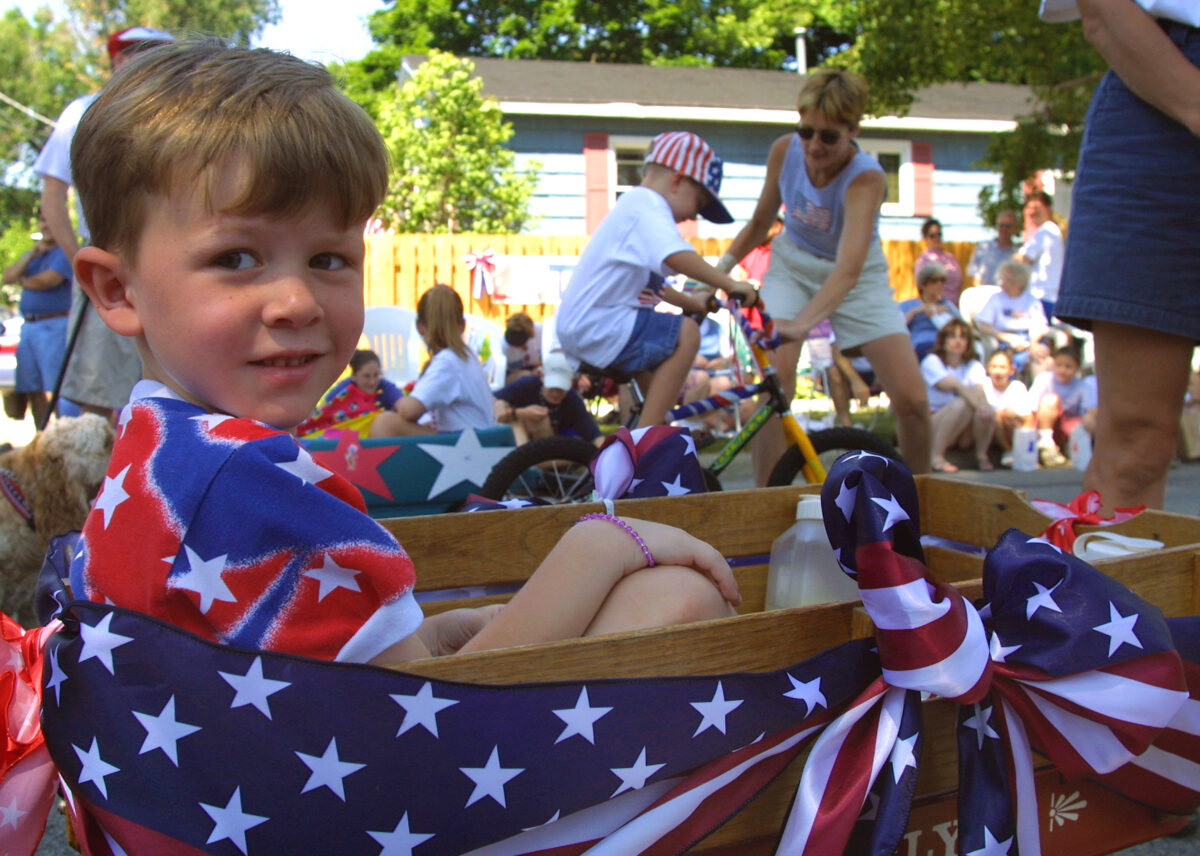 A boy rides in his Radio Flyer wagon as his parents march in the Independence Day parade in Des Plaines, Ill., in this file photo. (Tim Boyle/Getty Images)
Family & Education

This summer, let’s breathe some life into patriotism
BY Jeff Minick TIMEMay 6, 2022 PRINT

My Webster’s Ninth New Collegiate Dictionary defines patriotism as “love for or devotion to one’s country.”

Note that this short definition states nothing about the government of a country. As Mark Twain so well stated, “Patriotism is supporting your country all the time, and your government when it deserves it.”

Nor is patriotism identical to nationalism, which that same dictionary defines as “loyalty and devotion to a nation, esp: a sense of national consciousness exalting one nation above all others.” Comparisons of one country to another may be as natural as comparing a Honda to a Ford, but the true patriot rejects the extremes of jingoism, avoiding that dangerous descent into blind loyalty to flag and country.

Real patriotism, it seems to me, means treasuring our neighbors, the land where we live, the ideals and sacrifices that have shaped our nation, just laws, and the culture that all these elements have produced. It’s the same sort of affection we might find in a family and a home. There the quirks of our spouse and children are as familiar to us as the living room furniture. We share customs and rituals, laughter and tears, and a common past that brings us hope and strength in times of trouble. Patriotism works the same way.

Sadly, many Americans these days are finding that patriotism is much diminished. Google “Is patriotism dead in the United States?” and you’ll find numerous articles answering that question in the affirmative. Doomsayers from across the political spectrum tell us that love of country is a vanishing commodity in our public square.

This demise in patriotism didn’t occur overnight. For several decades, termites have eaten away at the foundations of our country. Our public schools and universities all too often teach their students about U.S. wrongs and failures, leaving out the vast number of accomplishments and benefits that have accrued since the founding of our country. Even now, some commentators and politicians accuse the United States of racism, sexism, and inequality. Millions of immigrants, legal and illegal, belie those accusations by trudging across our border in search of freedom and opportunity. And some employees in our major institutions are openly anti-American or even communists.

If we want to resuscitate our moribund patriotism—if we want to instill a love of country in our young people—what can we do?

A Red, White, and Blue Summer

Summer vacation is just around the corner. The kids will stow their backpacks in the closet, stay up later at night, wake later in the morning, and have scads of free time. Summer is the perfect opportunity to fire up their patriotic sensibilities.

Here are six easy ways to keep the flame of liberty burning in our children.

Within a two-hour drive of my home in Front Royal, Virginia, are Washington, a dozen Civil War battlefields, Mount Vernon, Monticello, Staunton’s Frontier Culture Museum, the Cyrus McCormick Farm, and a host of other such attractions. Although we’re still coordinating plans, my daughter and her husband, her children, and I will likely spend two or three days this summer roaming up and down the Shenandoah Valley visiting a few of these sites.

And if the high price of gasoline or a remote location prohibits some readers from such excursions? Simple. You can visit many of these museums online from the comfort of your den. The Museum of the American Revolution, the Smithsonian, and more all offer virtual tours and are just a click of the keyboard away. The same holds true for battlefields. Visit American Battlefield Trust, and you’ll find yourself exploring places such as Gettysburg, Antietam, and Yorktown.

Listen to the Great American Songs

When my children were young and at home, we listened to a “Wee Sing America” cassette in the car and in the kitchen until we wore the tape out. This collection of music ranged from “The Star-Spangled Banner,” “You’re a Grand Old Flag,” and “The Marines’ Hymn” to folksongs such as “Goober Peas,” “I’ve Been Working on the Railroad,” and “Cape Cod Chantey.” To this day, my children can still sing many of these songs.

You can find similar collections all over the internet.

Such music is the water and sunshine that can grow young patriots and allow them to flourish.

Make It a Movie Night

A family movie night is a great way to introduce the younger crew to older films about America, such as “Johnny Tremain,” “Mr. Smith Goes to Washington,” “On the Waterfront,” and “Young Mr. Lincoln.” More recent productions such as “John Adams” and “Gods and Generals” also sweep us back into the past, bringing to the screen the heroes and heroines of U.S. history.

Pop some corn, hit the sofa, and let the entertainment—and the education—commence.

Summer brings us several occasions when we might pause to honor and contemplate all those Americans, known and unknown, who helped build and defend our country. Memorial Day, Flag Day, and Independence Day—we can celebrate these special holidays by setting out some flags in our yard, reciting the Pledge of Allegiance, decorating a veteran’s grave in our local cemetery, and watching a parade or a fireworks display.

“Oh beautiful, for spacious skies
For amber waves of grain
For purple mountain majesties
Above the fruited plain.”

The United States has it all: lovely seashores, sandy deserts, towering mountains, woodlands, fields, and glittering cities. Many of our national parks are gemstones of beauty and wonder. When we visit such places or even when we’re simply driving down the road, we can find plenty of reasons to love this land that’s our home.

Bring Together Young and Old

Bring the youngsters together with the oldsters with the express purpose of developing patriotism. Have that 11-year-old team up with the granddaddy who served in Vietnam or the Gulf War. Have that 15-year-old learn from her grandmother who immigrated from China what drew her to the United States and what she finds attractive even today in her adopted country. Have all the kids ask these same adults about their own grandparents, how they lived and how they felt about the country.

This is history come alive. When I was a boy and our family would visit relatives in Pennsylvania, my dad’s uncle often sat in the evenings at a backyard picnic table telling me stories of our family’s past that stretched back to the Civil War. His tales gave flesh and blood to the histories and biographies I had read about in school.

What’s to Be Done

Abraham Lincoln once deemed the United States “the last best hope of earth.” If we wish to keep that hope alive, if we wish to breathe new life into our American ideals—“life, liberty and the pursuit of happiness,” as our Declaration of Independence declares—we must revive our love for our country and pass those affections along to the next generation.