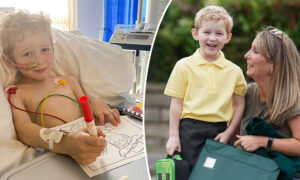 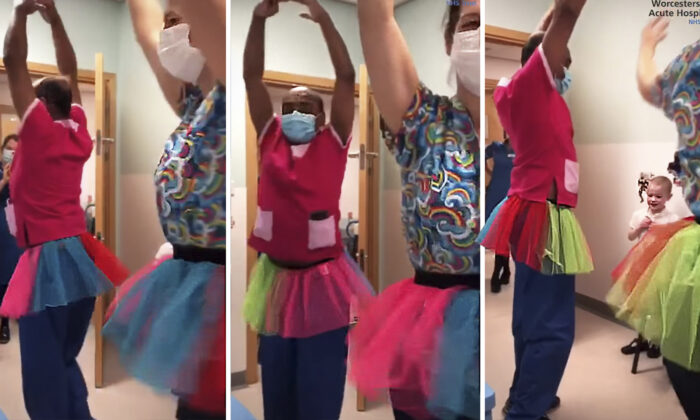 Izzy Fletcher, a 5-year-old cancer patient from Worcester, has had a rough time in the hospital lately. But when the staff learned how much she loved ballet, they decided to bring a smile to her face.

Doctors Baylon Kamalarajan and Emma Maunder wanted to delight the young lady, so they donned rainbow-colored tutus and performed their best impressions of Swan Lake in Izzy’s hospital room.

A delighted Izzy dished out instructions as the pair attempted pirouettes and entrechats.

“I can do a pirouette on one leg,” Izzy said. Then, she joined in with her own expert spin pirouette, chiding them for laughing at themselves.

“No laughing,” she said as they mimicked her one-legged twirl.

Worcester Acute NHS posted a video of the dance performance on Facebook, and it quickly went viral.

“Huge thanks to Baylon & Emma for the lovely surprise,” they captioned in a tweet. “Well done Izzy for *literally* keeping them on their toes!”

The video eventually caught the attention of the Royal Ballet, who shared the heartwarming performance with the caption: “Get well soon Izzy! We hope to see you dancing again soon.”

Pediatricians at Worcester Royal Hospital are currently treating Izzy for acute lymphoblastic leukemia. This is her second round of treatments, following her first, which began in 2017.

The brave young fighter finished her first round of treatment in May 2019 but relapsed earlier this year.

Now, she is undergoing additional chemotherapy, and her mother says it’s been tough. After undergoing intensive care for an infection, she was definitely in need of some laughter.

“She’s been through a really tough time the last few months,” Izzy’s mother, Vicky Fletcher, told BBC, “and it’s something [the doctors] wanted to do for a while, but she’s been so poorly, so it was a nice special treat for her.”

Now, the internet is wishing Izzy a quick recovery.

“Wishing Izzy a full and speedy recovery,” said another.

The viral video has earned Izzy some fans, too. Let’s hope one day soon they’ll be watching Izzy perform for them.

“Take care Izzy,” replied one fan. “Hope to see you dancing on the stage soon.”