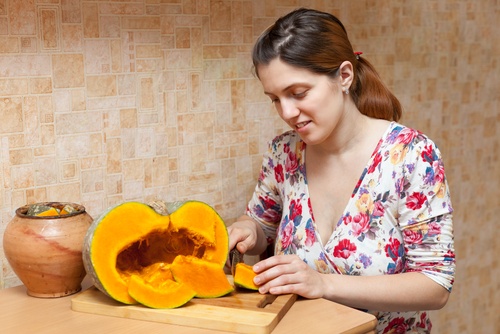 Buying seasonable produce is one way you can go green this winter. (Shutterstock*)
People

5 Ways to Go Green This Winter

Winter is coming in hurried steps—it’s time to make the white season a green one.

The European Commission states: “The overwhelming majority of scientists agree that [climate change] is due to rising concentrations of heat-trapping greenhouse gases in the atmosphere caused by human activities.”

As the season changes, our daily activities also change. Here are five ways to go green this winter and be friendly both to the environment and to your wallet.

1. Get an engine block heater for your car.

An engine block heater pre-heats your coolant, which in turn warms the engine block and lubricants before you start the car. This means the engine will start more easily and your car will reach it’s operating temperature much faster.

This cuts down on wasted fuel and greenhouse gas emissions while warming the car. It will also extend the lifetime of the engine.

The block heater needs to be plugged into an electrical outlet. It’s a good idea to invest in a timer, so it will automatically start heating so your car is ready to go when you are. It takes about 1–4 hours to heat up, depending on how cold it is outside.

Environment Canada states that “At -20 degrees Celsius [-4 degrees Fahrenheit], the use of a block heater can improve overall fuel economy by as much as 10 percent.”

Block heaters range from $20 to $50 and can be purchased at many stores that sell auto equipment, or online at Amazon or E-Bay. Universal heaters as well as heaters for particular car models are available.

It can cost $50 to $100 to have a mechanic install it, but you can also install it yourself following the instructions in this video:

2. Have a green holiday.

Why not bring some green inspiration to the season’s many holiday celebrations—Thanksgiving, Hanukkah, Christmas, New Years Eve? For starters, when going to a party, you could give your host a gift card with a donation to a non-profit organization instead of the usual flowers, chocolate, et cetera.

Earthshare.org cites the U.S. Environmental Protection Agency (EPA), stating: “Air inside the average home is two to five times more polluted than the air outside, largely due to toxic household cleaners and pesticides.”

So, when hosting a party choose non-toxic products to clean your home in preparation for guests or when it’s time to tidy up after the fun.

Use candles in some places instead of lamps for a different ambience at your gathering. Where you do use light bulbs, get eco-friendly bulbs—light emitting diode [LED] or compact fluorescent light [CFL]—which are available both for indoors and outdoors. They use 80 percent less energy and last 10 times longer than standard bulbs, according to Eartheasy.com.

If you have a gas fireplace and want to give your guests a really thrilling experience, use fire glass.

Fire glass is formed out of glass crystals that don’t give off any toxins. It’s installed in your gas fireplace to preserve the heat. It doesn’t burn, it produces more heat than wood, it is fragrance-free, it doesn’t produce any ash or smoke—and the best part is it looks like magic.

Probably the most boring part of holiday celebrations is doing the dishes. Here’s good news— making the dishwasher do the job instead of doing the dishes yourself is a more environmentally friendly way to go.

The David Suzuki Foundation webpage states: “Researchers at the University of Bonn in Germany found that, compared to hand washing, dishwashers use only half the energy, one-sixth of the water, and less soap.” So fill up your eco-friendly dishwasher and sit down to relax.

Did you know that the average American family spends $1,400 a year on energy bills?

The government’s Energy Star website states: “As much as half of the energy used in your home goes to heating and cooling.”

Much of the electricity used in American homes comes from coal, according to the EPA, which emits pollutants and greenhouse gases.

To help find the most eco-friendly power providers near you, use the EPA’s Green Power Locator.

Some other quick tips for burning less energy while heating your home: seal gaps and cracks that will let the heat escape, and wear warmer clothes instead of turning up the heat.

We all need to wear clothes, so why not go for eco-friendly garb?

Chemicals used in the process of making clothes damage the natural environment as well as the animals that depend on it. According to the Organic Consumers Association: “The problem with traditional cotton–by far the most used clothing fabric in the world constituting a $300 billion global market–is that producers use liberal amounts of insecticides, herbicides, and synthetic fertilizers to grow it. … Seven of the top 15 pesticides used on U.S. cotton crops are potential or known human carcinogens.”

So if you buy cotton clothes, it’s a good idea to choose organic cotton. Actually, for winter time wool, hemp, or fleece is the way to go to keep warm and be super green.

Wool is a natural product unlike the synthetic materials that won’t biodegrade. It is also very durable, meaning less waste as one article of clothing will last a long time.

When you buy fruit and vegetables out of season, not only must they travel long distances, burning fuel, they also ripen during transport instead of being picked ripe.

Season-appropriate produce requires less energy for transport, is cheaper, and tastes better. Fresher produce has more nutrients and is better digested, according to ecohabits.net.

The Good Guide app for smartphones also allows users to scan food and health products to see their eco-value.