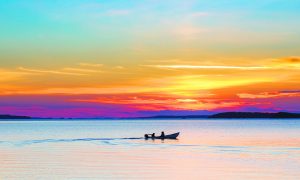 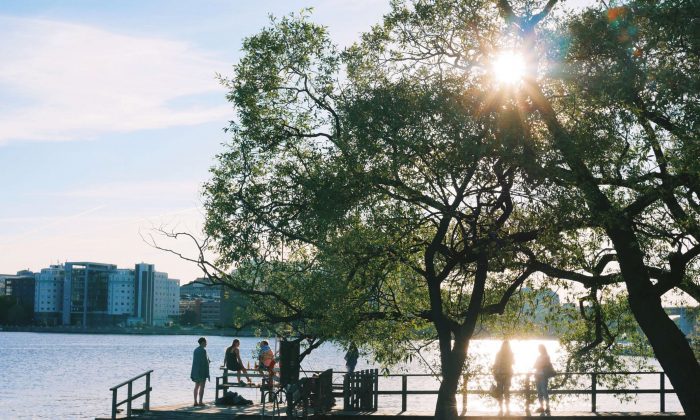 5 Ways to Experience Summer in Stockholm

Stockholm in the summer is something special. During the long hours of the last days of August, sunlight reflects in the water surrounding the city’s 14 islands. The narrow pink, ochre, and yellow buildings of Gamla Stan, the city’s Old Town, stand tall against bright-blue skies.

The biggest difference in Stockholm in the summer, though, is the people. Summer here is celebrated with gusto. As soon as the first warm rays of sunshine appear in May, my Swedish friends wear sandals, even when it’s still cool, and spend every moment outside.

“Summer is short, so I make sure I enjoy every single moment,” one friend told me, as she bravely wore short sleeves on a chilly May day.

Today is a late summer day and walking through town, I see tan, happy faces. Every restaurant has their outdoor patios filled, and the streets are bustling with pedestrians and cyclists.

While many visitors to Europe miss Stockholm—or Sweden in general—it’s one of my favorite European cities. This city of just under a million residents is clean and beautiful. Built on islands that border the edge of a 24,000-island archipelago along the Baltic, Stockholm is a city of water. Bridges—all 52 of them—crisscross the orderly streets, where modern architecture is built alongside Renaissance-era buildings.

Like most urban city centers, Stockholm offers something for just about everyone. But here are some of my own favorite ways to enjoy the city.

Every city has a heart, and for Stockholm, that’s Gamla Stan. Whenever I visit, it’s here that I go first. It was here, on this tiny island, that Stockholm was established more than eight centuries ago. Even now, as I amble through the island’s winding, cobblestone alleyways, it feels like a walk into the past.

This morning, I’m headed to Kafekoppen, a small, but popular café in the heart of Gamla Stan. The morning crowd has arrived, but I find an outside table that looks out into the Town Square. I watch as waitresses scurry in and out of the café’s 13th-century interior, their hands laden with pastries and huge cups of coffee.

Soon enough, I have a large cappuccino and a sweet pastry in front of me. I take my time enjoying my drink, because I’m right where I want to be. There’s no need to hurry in Gamla Stan; it’s a place to be savored. Regardless, I’ll be back in this Old Town several times during my visit, for it has stylish bistros and restaurants serving everything from traditional Nordic fare to fancy cocktails.

After my coffee, I follow the winding streets past the grand cathedral and then to the Royal Palace of the Kingdom of Sweden, which is located at the north end of Old Town. The palace, said to be the biggest in Europe, is the official residence of the royal family, although they currently live on the island of Drottningholm. The palace is open for tours and is a popular attraction for visitors.

Another excellent spot to learn about the Sweden of the past is at Skansen, Stockholm’s living open-air museum. More than 200 historic farm buildings, shops, and homes have been preserved in the 75-acre park amid the island’s nature and flowers. Swedes in period costumes interpret various time periods.

Skansen is one of the most popular attractions in Stockholm for locals and tourists alike, and the park has a fun schedule of events. Walking through Skansen, I drop in at a historic bakery, complete with a re-enactor sharing her wares. Later, I see a blacksmith, and then walk through several historic homes. Skansen is perfect for all ages, from families with young children to those interested in Swedish culture. Most national holidays, including Midsummer and Lucia, are celebrated at Skansen with traditional festivities.

For a view of the city that few ever see, take a rooftop tour of Stockholm. Yes, you can pay to walk across the roofs of the city. Of course, it’s all quite safe, since you go with the experienced guides at Takvandring Sverige, a local outfitter.

You wear safety harnesses and helmets and receive plenty of instruction before you go. The harnesses have a sturdy tether hanging from them and a carabineer at the free end. The guide snaps the carabiner into a metal cable that runs at ankle level, and voila, you can safely walk across rooftops that overlook Gamla Stan. Each guide has their own stories of Stockholm to tell, and that makes for a memorable experience.

Even though I have seen it many times, the Vasa still manages to take my breath away. After all, it’s not every day that you can stand alongside a salvaged 17th-century ship and imagine the lives that helped to build it.

Located on the island of Djurgården, the Vasa Museum houses the Vasa, an immense, ornate ship that sank on its maiden voyage. Happily, the ship was salvaged, and more than 95 percent of the ship is original. After much detailed and dedicated work, the ship’s restoration is approaching its original glory. The Vasa is a treasured part of Swedish culture, and no visit to Stockholm is complete without a visit.

Since Stockholm is a city of water, one of the best ways to explore it is on the water. If you have an afternoon, take a scenic boat tour on a century-old steamer across the waters of Lake Malaren to visit Drottningholm Palace, the private residence of the Swedish royal family. The palace is home to lush gardens and parks and is a World Heritage site. Other sites to see include the exotic Chinese Pavilion pleasure palace and the palace theater. Tickets are about $20.

Just 20 minutes from Stockholm is a huge archipelago with thousands of islands to explore. Though just minutes from urban life, the islands feel a world apart. Ask for a Waxholmsbolaget island-hopping map, and then plan your ferry trip from island to island. You’ll find plenty to do in the islands, from hiking to kayaking to dining and museums.

Next time you plan a trip to Europe, pull out the map and look for that little dot on Sweden’s East coast. Stockholm is well worth the visit.