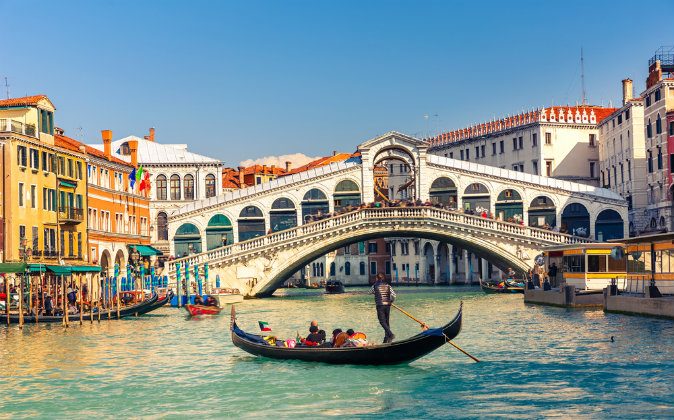 Gondola near Rialto Bridge in Venice, Italy via Shutterstock*
Destinations

UNESCO’s World Heritage status designates places of “outstanding universal value to humanity” by inscribing them on the World Heritage List so that they will be protected for future generations to appreciate and enjoy. Italy is the country with the highest number of heritage sites inscribed on the UNESCO list with a total of 50 located across the country – and 40 more on the tentative list. This is a testament to Italy’s rich cultural and artistic heritage, which makes it one of the most popular destinations in Europe for art and history lovers.

Planning a trip to Italy and wondering which of the 50 UNESCO sites to choose from? Here’s my pick of the top five:

The island city of Venice in the Veneto region of north-eastern Italy is one of the most unique cities in the world. Built entirely on water, this floating city is a collection of 118 small islands connected by 150 canals and 400 bridges. Described by UNESCO as an “extraordinary architectural masterpiece”, it was inscribed on its World Heritage list in 1987. Venice is indeed exceptionally beautiful, a city full of magnificent examples of architectural splendour and home to many stunning centuries-old squares, churches and museums featuring masterpieces by some of Italy’s greatest artists. Some of its small islands are known for a particular trade or handiwork: Murano for glass-making, and Burano for lace. Venice’s Carnevale dates back to the 12th century and is the most celebrated carnivals in Europe, famous for the beautiful masks and elaborate costumes donned by the many revelers who flock here. It’s not surprising why this city rich in history and culture is one of Italy’s most visited destinations.

The entire historic centre of this south Italian city was declared a UNESCO World Heritage Site in 1995. Founded by Greek settlers in 470 BCE, Naples is one of Europe’s most ancient cities which was once a crossroads for cultures in the Mediterranean region. Relics of its Greek and Roman past are preserved at the National Archaeological Museum of Naples, one the best collections of Greek and Roman antiquities, mosaics and sculptures in the world. Wander the narrow, winding streets of the Spaccanapoli district, which was originally the heart of the ancient city. Meanwhile, the Piazza del Plebiscito is the centre of modern Naples. Here you’ll find the imposing domed church of San Francesco di Paola, and the Palazzo Reale, the royal apartments of which can be visited, including the roof garden from where there are stunning views of the Gulf of Naples.

Copyright © 2015 by A Luxury Travel Blog. This article was written by Paola Fiocchi Van den Brande and originally published on aluxurytravelblog.com.

*Image of gondola near Rialto Bridge in Venice, Italy via Shutterstock