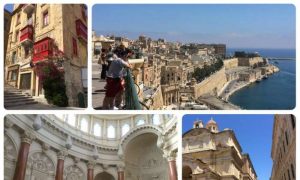 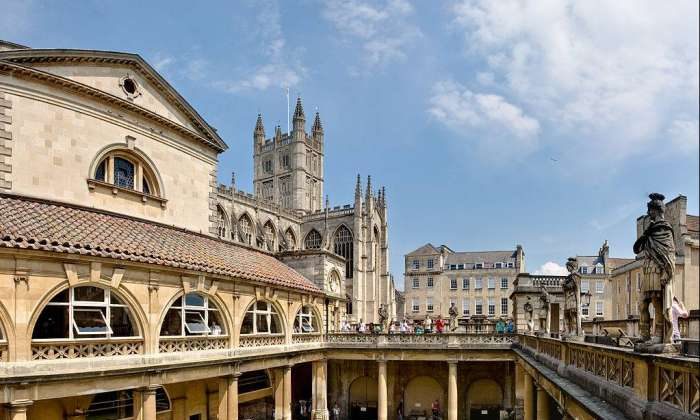 South West Trains are offering 25% off off-peak day return tickets every Friday, Saturday and Sunday until Sunday 28 September*! So we went looking for historic English towns you could visit by train and explore. Here is our choice:

The beautiful Georgian city of Bath is so historic that the entire city is a World Heritage Site. There’s an abundance of Roman heritage, in particular the Roman Baths and Temple built around a natural hot spring which reaches temperatures of 46°C. From the first to fifth centuries this was the hub of Roman life and the remains are so remarkable they are a must-see. Combine this with a visit to the 18th century Pump Room, located by the Temple, for a spot of tea and some live Georgian entertainment.

One thing you should know before you venture to Bath: they say it is haunted and for the brave there are guided tours to visit their haunts, such as the Man in the Black Hat who loiters around the Assembly Rooms and the Gray Lady who leaves a waft of jasmine behind whenever she visits the Theatre Royal.

There are museums too, including the Jane Austen Centre, the Museum of Costume and the American Museum.

This is one of England’s most visited seaside towns. There’s a long ribbon of soft golden sand that stretches into the distance for seven miles. The curves of the pretty promenade are followed by a remarkable series of colourful beach huts, many of which have all mod-cons including cooking facilities.

The coast laces a cosmopolitan town that bustles with shops, restaurants, bars and a vibrant nightlife.

There’s peaceful areas too such as lovely public gardens – you can follow the tree trail for a two-hour walk through this lovely space.

One of the features of Bournemouth is its hilly landscape. If you look up you can see a fantasy castle styled house on the cliff-top.

Merton Russell-Cotes bought this incredible villa for his wife and the art loving duo were avid travellers and Victorian art collectors. Their home is now the Russell-Cotes Art Gallery and Museum where all their acquisitions from all over the word, including a collection of British and Pre-Raphaelite art, is on show. You can even get married there.

The historic market town of Dorchester is one of the smallest in England yet huge on history.

It dates back to the Iron Age but has its roots in Roman England when it was known as Durnovaria. Fires destroyed most of it in the 17th and 18th century and had to be rebuilt which explains why so many elegant Georgian buildings lace its side streets. The high street is on a hill so it’s a steep, but interesting walk to get to the top.

It lies on the banks of the River Frome, in the Frome Valley and has a lovely coast line at Lyme Regis. This is where Hollywood blockbuster, The French Lieutenants Woman was filmed.

It was also the setting for Thomas Hardy, whose novel The Mayor of Casterbridge was based on the town. The writer was born at Higher Bockhampton a few miles outside of town and his cottage was bought by the National Trust who have opened it to the public.

Later he moved to a house called Max Gate which is also open for viewing. In fact many of the buildings mentioned in Hardy’s novels can still be seen, such as St Peter’s Church, The King’s Arms Hotel, the White Hart Hotel, The Corn Exchange and Grey’s Bridge.

Copyright © 2014 by The Travel Magazine. This article was written by Sharron Livingston and originally published at thetravelmagazine.net