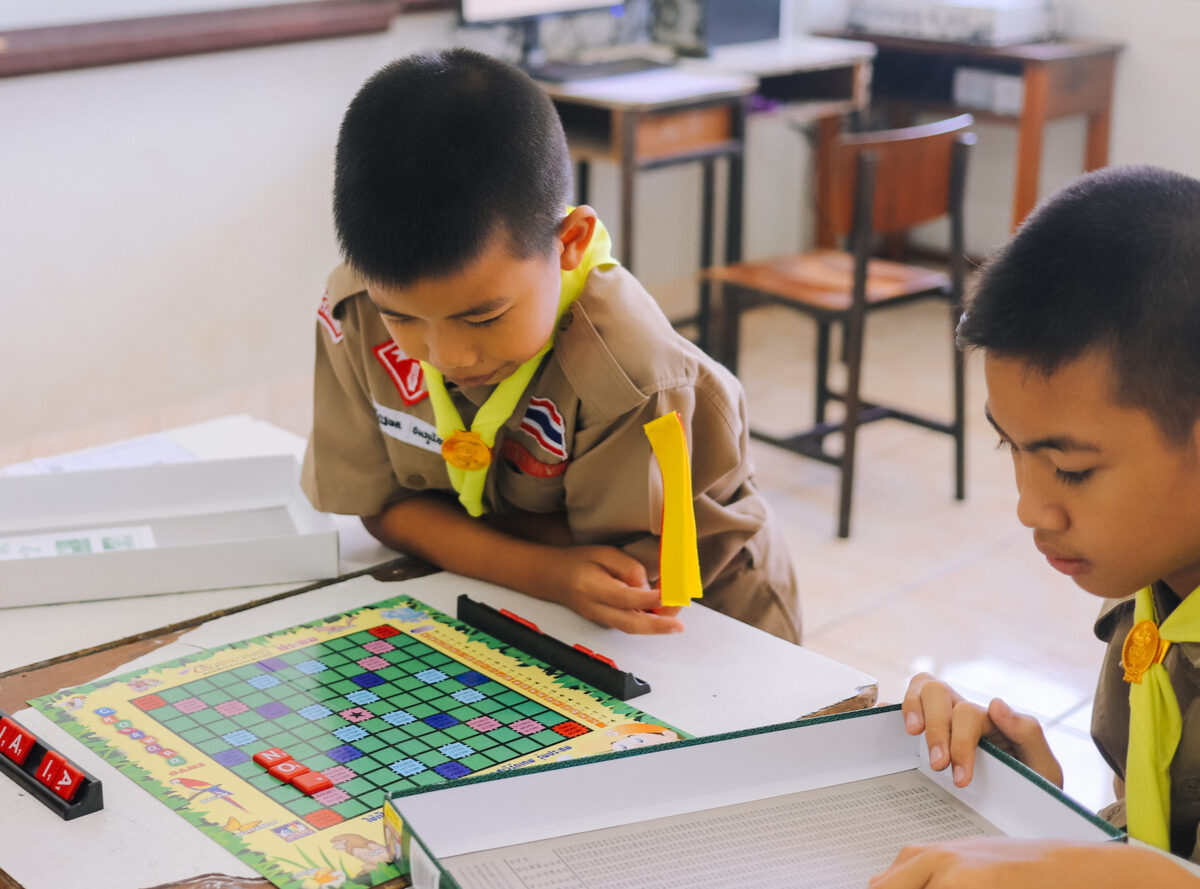 5 Fun Games That Encourage Creativity and a Love of Language

With the school year wrapping up this week for the few remaining states still going, kids across the country are shifting into “summer mode” faster than you can say Bomb Pop.

While summertime surely should be a time of fun, unwinding, and new adventures for our kids, it always comes with a small dose of anxiety on the part of educators such as myself familiar with what’s known as the “summer slide.”

Nope, not the fun-filled Slip ‘N Slide variety. More as in “backslide”—aka academic regression (a well-documented phenomenon involving a significant loss of learning that accompanies many a child’s summer break).

Fortunately, much can be done to keep your kids’ vocabulary, reading skills, and affinity for language alive and growing over the summer months. And the best part: It doesn’t have to feel like a chore for anyone.

With families and friends from afar coming together at the campsite, lake house, or on grandpa’s porch, traditional board games provide a great way to reconnect, have fun, and—potentially—foster a love of language.

What follows are five games I’ve found particularly popular with grade-school learners that fit the bill. Here they are, in no particular order.

Now going into its fifth decade, Boggle has managed to age well. Perhaps, it’s the simplicity of it, or that fine line a game has to strike between serendipity and knowledge/skill. Whatever the case, it’s still a win.

You begin with a simple shake of a batch of letter cubes, let them fall as they will, and then each participant races against a good-old sand timer to form words of four-or-more letters. The longer the word, the more points you get.

The beauty of Boggle is that anyone can use any words they’ve got in their budding vocabulary—be it from third-grade classroom read-alouds or a college seminar on Virgil’s “Aeneid.”

A fun little twist: Allow your kids to use foreign-language words from any world languages they might be studying, both to even the playing field and recognize their achievements. (It also adds a little cultural flair to the whole event!)

Close kin to Boggle, Scrabble is another game that seems to defy aging with its 21st-century appeal and points-for-letters celebration of all words English.

Here, the creativity quotient gets upped a little bit as participants don’t merely spot words but have to actively form them on the provided board.

While there isn’t the explosive energy of racing against the clock as in Boggle, here there’s room for strategizing and the excitement of landing on “premium squares” (which boost your score).

There are lots of potential spin-offs and adaptations here as well, including allowing foreign words and playing in teams (to possibly “even out” those age differences—like fathers-and-sons vs mothers-and-daughters). This one can even be played solo, competing as it were against one’s own past benchmarks.

Geared to slightly older players (this one’s recommended for 12-and-up as opposed to 8-or-above), Balderdash is double-over-laughing fun that really celebrates creativity and humorous aspects of the English language.

Players take turns making up imposter definitions for a randomly chosen—and decidedly obscure—word or term that nobody present is bound to know. Then, everyone tries to guess which is the real definition when it’s read alongside participants’ imaginative offerings.

Cards also contain different categories that can be chosen from (i.e., not just obscure words)—including people, initials, and movies.

This game continues to be an enormous amount of fun at my own family gatherings, and is the one that the adults turn to first when left to their own devices.

One noteworthy tidbit: Balderdash never seems to stoke the competitive fires the way some games are prone to, yet not at the cost of fun, by any means. It also isn’t nearly as time-bound as some classic games (think Monopoly). You can call it a wrap at any point, with a nice sense of closure and satisfaction. Got just 25 minutes? Game on.

In each round of Wordplay, players compete to form words that contain two designated letters (chosen with the spin of a wheel) and that fall in a certain category—also arrived at by a friendly spin.

For example, let’s say you spin and get the letters “H” and “A,” and land upon the category of “places.” Participants would then race against the clock (counting down 60 seconds) to try to come up with three place names that start with an H and contain an A. Other categories include things such as names, objects, and creatures.

(Want a little trial run? Give yourself a minute to see what you can come up with.)

Points are awarded based on set criteria, and are matched with the satisfyingly tactile reward of getting to move your piece around the board, like in many classic games.

Back to our example: If you came up with, say, “Hawaii” and “Hiroshima,” you’re in business; “hair” wouldn’t get you any points, since it’s not in the category of “places.”

You can expand the possibilities while making the game more accessible for your young ones, and celebrate literature by allowing, for example, use of characters, objects, creatures, and so on from whatever children’s literature the kids have been reading. Otherwise, this one can be a little challenging, hence its rating of ages 14 and up.

If your summer involves a few road trips that have the kiddos pinned down in the back seat, where Boggle boards tend to topple, you can always play a good ol’ game of “20 Questions” with a slight educational twist or two.

To foster language and literature goals, try one of two adjustments to the game.

One is to make a rule that whatever person or thing one is thinking be something from a book one’s read. You’ll be surprised at the creative output this elicits—from Arthurian swords to items tucked away in Ma and Pa Ingalls’s cupboards. Alternatively, for kids who are more well-read, you can make the object to guess be a specific book. (I’ve used this in my literature classes here and there, to fill the odd few minutes, to great effect.)

Think of all the above games as a little nod toward celebrating reading, language, and the kinds of things that are easy to forget when the diamond beckons and the ice cream truck is making its merry rounds.