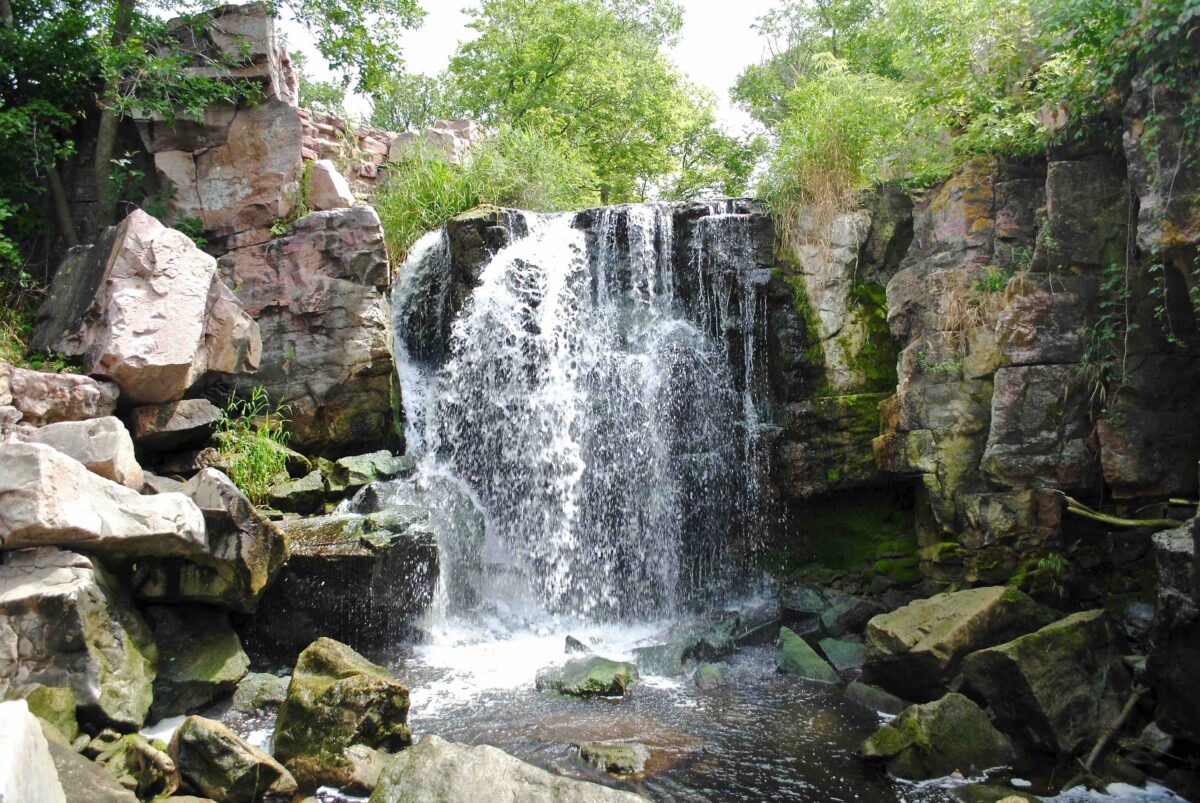 Winnewissa Falls, is in Pipestone National Monument, located in southwestern Minnesota. The catlinite, or "pipestone" from here, has been traditionally used to make traditional Indian ceremonial pipe. (EWY Media/Shutterstock)
Travel

MINNEAPOLIS — Among the Midwest travel destinations that are awaiting tourists this summer are a natural adventure park in the Dells, mountain bike trails on the North Shore, and a luxury cruise that doesn’t require an ocean. Here are five experiences to consider before the season gets away from you.

1. New in the Dells: Land of Natura & Medusa’s Slidewheel

Wisconsin Dells is famed for its waterpark innovations, but this year it may have outdone itself. The all-new Land of Natura, dubbed a natural adventure park, is slated to open in July in the Lower Dells. The first phase of the $60 million project consists of a five-acre, naturally filtered manmade lake — Lake Wisconsin Dells — with a floating waterpark, an 1,100-foot self-guided canopy tour, and more than 10 miles of hiking and mountain bike trails. In true Dells fashion, the floating waterpark, canopy tour and naturally filtered lake are all billed as the largest or longest — in the nation, North America and the world, respectively.

The park also features 2,000 feet of Wisconsin River shoreline, a beach with a volleyball court, clear kayak rentals, and food trucks serving local specialties. There’s also Mount Natura. This manmade mountain is perched alongside the lake, with waterfalls and slides ranging from 100 to 150 feet long that whisk you right into the lake. The completed 150-acre Land of Natura is expected in three to five years, and will remain open in winter for snowshoeing, cross-country skiing, ice skating and tubing. (landofnatura.com.)

Meanwhile, at Mt. Olympus Resort in the Dells: Medusa’s Slidewheel is the first “rotating waterslide” in the nation. The raft ride consists of tubular, serpentine waterslides that pass through a rotating Ferris wheel, propelling riders forward, backward and sometimes airborne. The accompanying 22,500-square-foot indoor waterpark expansion is Mt. Olympus’ largest investment in its five-decade history. (mtolympuspark.com.)

Arguably Minnesota’s No. 1 landmark and visual icon, the 1910 Split Rock Lighthouse stands high at the fore of one of its most popular state parks. Now that park is cutting the ribbon on a new modern campground to help out with the bursting popularity of the North Shore, while fostering the rise of mountain biking along Lake Superior.

Shipwreck Creek Campground — referencing the historic maritime disasters that necessitated the lighthouse — has 46 drive-in inland campsites with electric hookups amid a boulder-strewn landscape, adding to Split Rock’s existing supply of cart-in, backpack- and kayak-friendly sites. The first Shipwreck Creek campers will put down stakes from June 1 to Oct. 23, and not surprisingly, most summer slots are already long gone. (Think Mondays, or September.)

Want to ride bikes but can’t get a campsite? The Red Raven bike-cafe crew is putting the finishing touches on its Red Raven North outpost in nearby Beaver Bay, with eight basic new motel rooms now listed on Airbnb. The bike rental shop/cafe will follow this summer. If it’s anything like the original Red Raven near Cuyuna Lakes, it should help transform Split Rock into the mountain-bike mecca of the North Shore.

For the first time since it opened in 1958, Pipestone National Monument’s visitor center features new and interactive exhibits, developed with input from 23 tribal nations. The extensive remodel, which quietly debuted in 2021, shifts the focus from artifacts and discoveries by early European explorers to the site’s ongoing spiritual importance to modern tribes.

Native Americans have made pilgrimages to this quiet parcel of prairie in southwestern Minnesota for at least 2,000 years. Generations of families with quarry permits hammer and dig through rocky outcrops of pink quartzite to reach layers of deep-red pipestone. The pipestone is soft enough to carve into pipes for burning tobacco and sweet grass so the smoke can carry prayers to the Great Spirit or Creator.

Visitors can listen to oral histories, try lifting a simulated 50- to 75-pound pail of quartzite, and watch carvers at work. Park interpreters, including two who are Indigenous, host weekly Lakota and Dakota storytelling, teach words in their language, and plan special events such as Founders Day (Aug. 25) with traditional dancing and horses dressed in regalia, and Indigenous Peoples Day (Oct. 10 this year) with musicians and luminarias along the Circle Trail.

“We hear a lot about how peaceful this place is,” said Gabby Drapeau, a park interpreter and member of the Yankton Sioux Tribe. “[First-time visitors] don’t expect the trail and everything to be so beautiful.” (nps.gov/pipe.)

4. Viking sets sail on the Great Lakes and Great River

Viking Cruises is synonymous with classy European river voyages and luxury expeditions to the poles. Now the cruise line is bringing prestige cruising to our own Vikingland for the first time, in two very different styles.

First, Viking Expeditions’ polar-class, 378-capacity Octantis, fresh off its maiden season in Antarctica, has begun to ply the “Undiscovered Great Lakes” with summer sailings between Thunder Bay, Ontario, and Milwaukee — and the ship makes its Duluth debut this Sunday for a port of call. Passengers might check out the Glensheen mansion or ride the North Shore Scenic Railroad before continuing on their eight-day, three-lake journey.

Next up, Viking River Cruises’ 386-guest Viking Mississippi will embark on its own 15-day maiden voyage on the Great River from New Orleans to Minnesota, arriving in and departing from St. Paul on July 23 with ports of call in Red Wing, Minnesota, and La Crosse, Wisconsin, and beyond. There are also six late-summer sailings between St. Paul and St. Louis.

All of these voyages are bucket-list experiences on state-of-the-art vessels with Scandinavian design and luxe amenities, and they’re priced accordingly. Huck Finn’s raft, this ain’t. But the bigger development for Minnesotans may come when Duluth becomes the start and end point of a cruise in 2023. That’s when the Octantis will sail all the way from Minnesota to Toronto (and vice versa) on the 15-day “Great Lakes Collection.” That one starts at $13,995. (vikingcruises.com.)

Why go to Canada in 2022? Well, because we can. After 19 months, the world’s longest border was reopened for tourism late last year. The Canadian government’s online questionnaire for travelers concludes that foreigners with a full, approved vaccination “will likely be allowed to enter Canada,” which is a perfectly Canadian response.

Banff in Alberta is a worthy answer to the best Western U.S. national parks. Air Canada and Delta have new nonstop service from Minneapolis to French-flavored Montreal, for a European-style getaway in North America. Or, you could hopscotch Minnesota’s busy North Shore for even-more-north Thunder Bay.

The closest foreign city to the Twin Cities — a six-hour drive — TBay is something of a more ragtag Duluth. But the city is dwarfed by the Sleeping Giant, a provincial park on an imposing peninsula across the harbor. Hike up the Top of the Giant Trail for panoramic views of Superior. On the other side of the city, the 130-foot Kakabeka Falls is one of the highest waterfalls in Ontario, earning the nickname “Niagara of the North.”

There’s a small urban core with an active waterfront in summer, Indigenous art, the festive and tasty Sleeping Giant Brewing, plenty of poutine, and a beloved local pastry called a Persian. It’s not for nothing that TBay is the embarkation port for Viking’s new eight-day Great Lakes cruise to Milwaukee (see above). Lodging in the area is modest, but a fancy new Delta Hotel by Marriott on the waterfront exemplifies a city on the upswing. (www.northernontario.travel.)