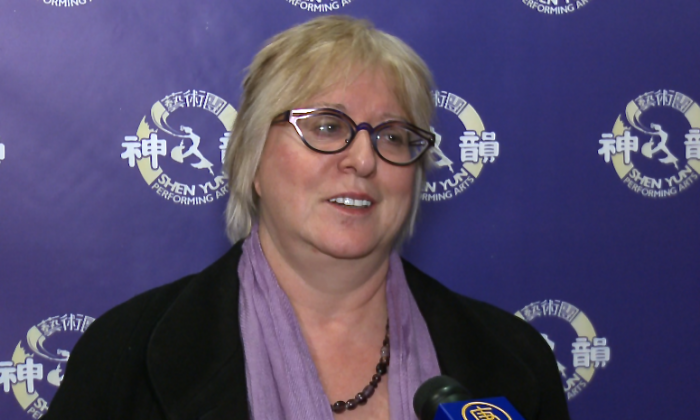 Singer/actress Kat Taylor took in Shen Yun Performing Arts at Mississauga's Living Arts Centre on Jan. 16, 2014. She felt the experience changed the way she looks at herself, people and her surroundings. (Courtesy of NTD Television)

MISSISSAUGA, Canada—Singer and actress Kat Taylor is a Chicago diva with a talent for cabaret and musical theatre so she knows a thing or two about show business.

Her gift for musical theatre has led her to headline her own concerts and has earned her rave reviews in the U.S. She has also played lead roles in national tours of musicals such as Phantom of the Opera and Martin Guerre.

On Thursday, Ms. Taylor saw her first presentation of Shen Yun Performing Arts and she left describing her overwhelming joy with what she saw, with special praise for those that shared her own profession, Shen Yun’s vocal soloists.

“I’m a singer by profession, so I especially enjoyed the tenor near the end, who was, I would have to say, one of the best tenors I ever heard in my life. He has a truly exceptional voice,” she said.

Ms. Taylor said even though she could understand the lyrics sung in their original Mandarin with the translation projected on the screen behind, she would have felt their meaning regardless.

“I could feel his heart. He was really giving his full heart too. He is really compassionate,” said Ms. Taylor referring to Tian Ge, an award winning tenor who has performed on the world’s greatest stages.

She said the entire show was an education, and one that she enjoyed immensely.

“I learned a lot today about Chinese culture,” she said. “I didn’t realize for example that acrobatic movements were part of Chinese dance and culture.”

She noted that while those movements were absorbed into Western culture, it is not where they originate from. “It is an art and dance form, which I didn’t realize. So what was very meaningful for me.”

Those movements are the more technical elements of classical Chinese dance, an art form that is thousands of years old, passed down dynasty after dynasty, enriched with each passing generation.

Ms. Taylor said she liked so many elements of the presentation that evening.

“I was very moved and totally excited by the colour and the movement and the skill and the mythology, the messages, the humour, the heart-felt energy, the passion and how well organized the program was.”

“I loved it, it was very original, it was unexpected,” said Ms. Courville who creates custom jewellery.

Ms. Courville said they both enjoyed Shen Yun’s digital backdrops. The vivid animations they project throughout the dances extend the range of the stage with scenes from China’s history and heavenly realms. Sometimes the scenes interact with the dancers on stage.

“We really loved the use of the digital animation and the interaction with that. That was very nice. It was something that you’ve never seen in any other show before. I go to a lot of musical theatre, a lot of shows in Toronto, and I’ve never ever seen anything like that at shows before, and that was just amazing,” said Ms. Courville.

Ms. Taylor said she appreciated how the backdrops harmonized with the costumes of the dancers, including the long flowing sleeves like ribbons on some of the costumes that extend the dancers arms accentuate each movement.

“The costumes just blended in, and the ribbons just looked like the rivers and the landscape.”

Ms. Taylor has worked with many musicians in the course of her career, and noted the unique orchestra that accompanies Shen Yun’s dancers.

She noted the performance by erhu virtuoso Mei Xuan. “It is a very unique sound, so it touches the heart in a very unique way,” she said of the erhu, China’s two-stringed violin.

She said the erhu’s mournful sound made it more meaningful given what has befallen the Chinese people.

“I felt that that instrument really brings out the yearning in the heart of the Chinese people to express and share who they are and the beauty of their mythology.”

“It was both sad and inviting, asking ‘please come to my heart.’”

Ms. Taylor said Shen Yun helped her find a connection with people she hadn’t met, particularly with Chinese people. She felt grateful they shared this culture with her.

“Suddenly I feel as if everyone is my friend. Like you have this beautiful part of you that I didn’t know about—now I know about [it].”

“This particular show brings people together in a wonderful way,” she said and added that the experience helped her discover a part of herself and the world that she did not know. She now wishes she could learn Chinese.

Ms. Taylor also said that the experience helped her better appreciate life, “To really enjoy and just feel immersed in my surroundings.”