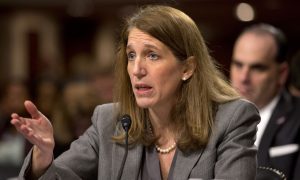 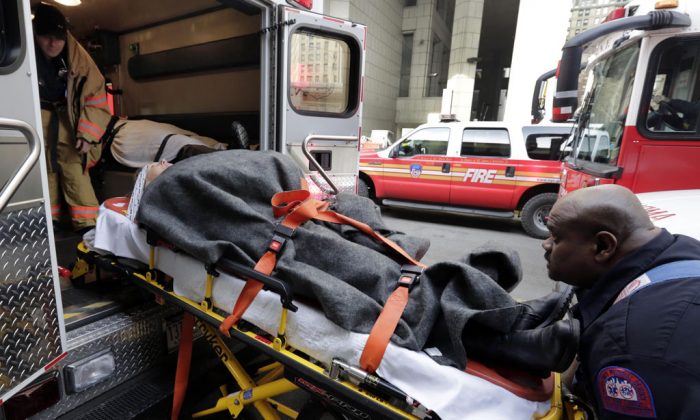 An injured passenger of a New Jersey ferry is loaded into an ambulance, in New York, on Jan. 9, 2013. Nearly 20 percent of U.S. consumers — 42.9 million people — have unpaid medical debts, according to a new report released Thursday, Dec. 11, 2014, by the Consumer Financial Protection Bureau. The findings suggest that many Americans lack the financial resources to pay for health emergencies — and that the notices from hospitals and insurance companies about the cost of treatment are confusing and baffling. (AP Photo/Richard Drew)
Health News

WASHINGTON—Nearly 20 percent of U.S. consumers with credit records — 42.9 million people — have unpaid medical debts, according to a new report by the Consumer Financial Protection Bureau.

The findings suggest that many Americans are being trapped by debt because they are confused by the notices they get from hospitals and insurance companies about the cost of treatment. As a result, millions of Americans may be surprised to find they are stuck with lower credit scores, making it harder for them to borrow to buy a home or an automobile.

“When people fall ill and end up at the hospital with unexpected bills, far too often they have entered into a financial maze,” CFPB director Richard Cordray said in a speech to be delivered Thursday in Oklahoma City.

On average, a person with only overdue medical debt owes $1,766. Someone with unpaid medical bills and other sources of debt — possibly credit cards or back taxes — owes an average of $5,638. More than half of all debt on credit reports stems from medical expenses.

The report by the federal regulator indicates that much of this trouble could be avoided. About half of consumers who only carry medical debt have no other signs of being under financial distress. But complaints to the CFPB indicate that consumers are routinely baffled by medical bills. Unwieldy insurance and hospital statements leave them uncertain as to how much money they owe, the deadline for payment, and which organization should be paid.

The confusion tends to generate disputes from consumers about the unpaid debts. This has prompted the CFPB to also announce Thursday that it will require major consumer reporting agencies to provide regular reports on how they investigate and respond to disputed charges.

The unpaid medical bills have negative repercussions for credit scores, which help determine how much money people can borrow and the interest rates for mortgages and auto loans.

An unpaid bill of at least $100 could lower an otherwise sterling credit score of 780 by over 100 points, the Fair Isaac Corp. told the CFPB based on a previous model it used to calculate creditworthiness.

The firm updated its credit score model in August, putting less weight on unpaid medical bills when predicting the likelihood of repayment. Consumers with only medical expenses in collection would see their credit score increase by a median of 25 points once the new model is fully implemented.

The updated model was announced after a separate CFPB report in May on the impact medical debt had on credit scores.

The latest CFPB analysis overlaps with a separate study released in July by the Urban Institute, a Washington, DC-based think tank.

The Urban Institute study found that the share of Americans with debt in collections has remained relatively constant, despite the country as a whole whittling down the size of its credit card and other debts since the Great Recession ended in the middle of 2009. That points to a sizeable share of Americans who are not only struggling to understand medical bills but also have no choice but to take on debts they have little chance of repaying.

The Urban Institute found that 35.1 percent of people with credit records had been reported to collections for debt that averaged $5,178, based on September 2013 records.