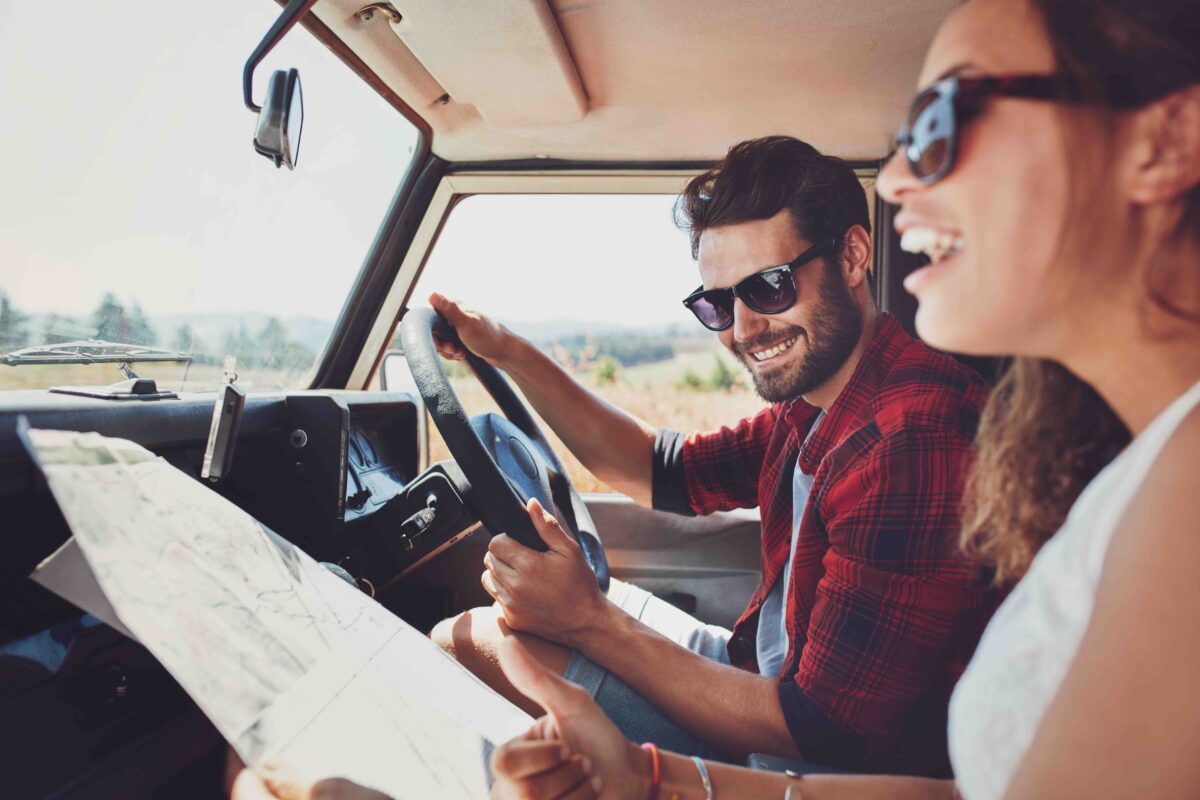 4 Wheels, a Map and a Curious Mind Make for the Best Road Trips

Charles Kuralt, the journalist who crisscrossed the back roads of America and chronicled his travels in “On the Road” for CBS, perhaps summed up road travel more succinctly than anyone when he intoned, “Thanks to the interstate highway system, it is now possible to travel from coast to coast without seeing anything.”

Every year my husband and I drive thousands of miles, sometimes as much for the adventure of traveling as a means of simply getting from one place to another. And unless time is critically important, we avoid interstate highways altogether in favor of rambling along the back roads, always searching for something wonderful and interesting, even if it takes twice as long to get to where we’re going.

During our sojourns, we’ve stumbled upon some pretty remarkable and unexpected sights: a lone giraffe grazing in a field out in the middle of nowhere in South Carolina, a rattlesnake so monstrous that its stretched-out length took up an entire half of a country road, and an uncountable number of Statue of Liberty replicas. We also learned that nearly every single town in the southeastern United States, no matter the population from a thousand to a million, has either a Dollar General or a Dairy Queen, that we often see vehicles hundreds of miles away from our hometown with the same county license plates as ours and, finally, no matter how beautiful or fun the destination, the best view is turning into the driveway and seeing our home after being gone for a long time.

There’s something wonderful about romancing the open road, whether you’re simply taking a leisurely Sunday drive to nowhere, striking out on an all-day journey or even considering the ultimate road trip of motoring coast to coast. Don’t let the trip get spoiled by such things as lost keys, spotty cell service or other travel ogres that can pop up. Enjoy these few tips for a simpler, safer and more relaxed road trip made just for two.

When the smartphone plays dumb or the car breaks down

While getting lost is half the fun of a road trip, there are still remote areas where cell phones and other technological gizmos, wizardry and gadgetry fail to work properly. The solution is a paper map, complete with colorful lines and squiggles and dots that must be deciphered. Since the first ones drawn on papyrus in ancient times, maps have always been an integral part of road trips. Make the small splurge and buy a good map or even an atlas before hitting the road.

If you take enough road trips, you could eventually end up stranded with car trouble on the side of the road in searing heat or biting cold. Instead of digging through the glove compartment for the number of your roadside service, keep it on speed-dial. Having that number handy ties you to your rescuers. Check your insurance company or credit card for plans or join a company like AAA. It’s worth the price for peace of mind.

Dining and dives and historical markers

Road trips are perfect for getting outside of your comfort zone. Try that roadside diner or local farm-to-table restaurant instead of your favorite chain. You know the type, the out-of-the-way dive where the food is good and everyone is friendly and where the waitresses all say honey and sweetie and refill your sweet tea or coffee without your having to ask. The chefs – usually mama-trained and not Le Cordon Bleu-trained – aren’t afraid of salt and seasoning, and the grilled cheese is always gooey and tasty, the stew thick and creamy, and the fried chicken heavenly.

The one thing my husband and I just can’t seem to pass up is the chance to read a historical marker, especially those in the middle of nowhere where it doesn’t seem possible that even one single thing of interest could have occurred there. Here in Georgia alone, more than 2,200 historical markers dot the roadsides, telling of extraordinary events that might not otherwise be known, from spots that mark where the world record largemouth bass was snagged in Telfair County, to birthplaces of Pulitzer Prize winners like Caroline Pafford Miller in Baxley, to baseball greats like Ty Cobb in Franklin County.

For summer travel, before leaving home and hitting the highways, freeze a few bottles of water. The ice will melt as the miles flow behind you, and you’ll always have cold water at your fingertips.

Keep a small, collapsible cooler in the trunk of the car, too. It’s ideal for bringing home perishables like leftovers from a restaurant, fruits and vegetables from a farmers market, or handcrafted cheese and butter from a farm stand.

Be smart and sensible

In some cities, horse-drawn carriage tours, trolleys and walking tours are offered. These types of outings are worth every penny, as they’re often the best way to learn about a place rather than on your own. Think: New York’s Central Park, Beaufort, New Orleans, Charleston and Savannah. Most guides must be licensed, which means passing rigorous tests. Take the tour, hear what the guides have to say, and then wander around on your own and explore the facets of the city you’re most interested in.

Wherever you go, especially in spring and summer, consider keeping a jacket or hoodie in the trunk of your car. Although it may still be warm out where you are, it might be cooler where you’re traveling in the mountains or near a glacial lake. You’ll be glad you brought that extra layer when the temperature dips. So that it stays clean and doesn’t take up much room, roll it up, pop it in a plastic bag and tuck it in the corner of the trunk.

Toll roads can pop up in the most bizarre of places, and their fares might be higher than you expect. Stock the console with dollar bills and coin rolls just in case. Once, while taking the scenic Highway A1A along Florida’s coast, my husband and I were surprised that part of the road is by ferry crossing over the St. Johns River. We were near the end of a trip and because of an irresistible cash splurge earlier in the day, we had barely enough cash between us — we usually rely on debit cards — for the $7 fare. It was a well-learned lesson to keep cash in the car.

For Fido and Fluffy

When it comes to road travel with pets, the Humane Society of the United States suggests leaving the front seat for humans and the back seat for your pet. If an airbag deploys while your pet is in the passenger seat, even in its crate, it might injure your pet. Secure the pet carrier with a seat belt for even more safety.

Take an extra car key and keep it in a separate, safe place like your significant other’s purse or pocket. If your keys are lost or stolen, then you have an extra. Also, check your spare tire that it’s in working order, plus keep a lightweight blanket stored with it in case you have to lie on the ground to change the tire — it could come in handy for a spontaneous roadside picnic, too. If you’re renting a car, check before driving off the lot to determine where the gas tank is located. That will save you confusion when it’s time to fill up the tank.

Sometimes there is really no beginning or end to a romantic road trip, and at the forks in the road, there is no right or wrong choice. Just rely on curiosity, paper maps and going where the heart leads you.