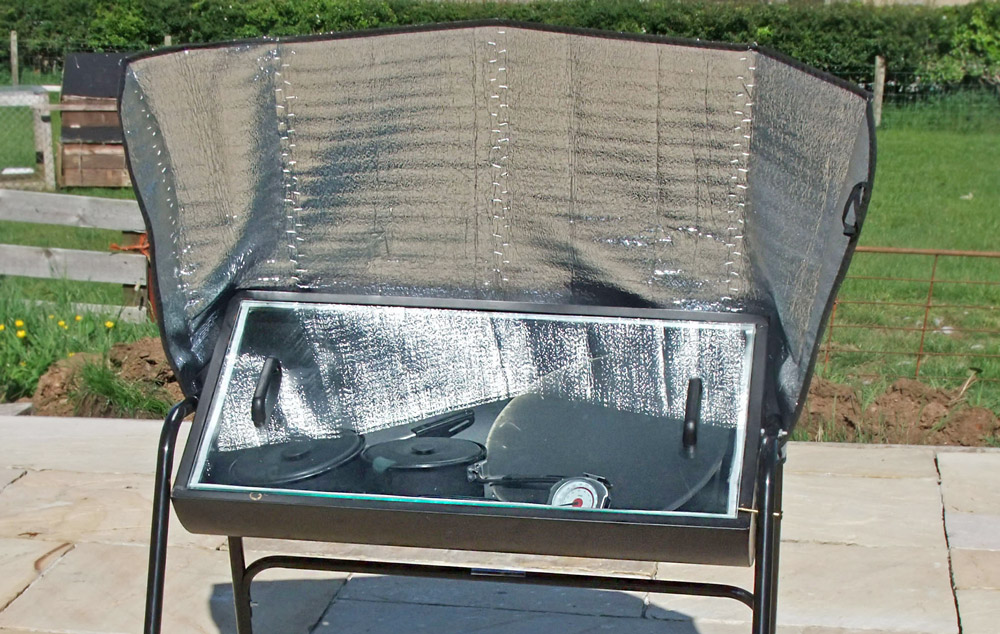 With the right collection of mirrors, angles, hinges, clamps, screws and patience, it is possible to cook food with sunshine alone. (Ballygally View Images/Shutterstock)
Food

3 Reasons I Cook (And Bake!) With Sunshine

On one ordinary day back in 2012, a hefty envelope turned up in my snail mail containing a very kind letter along with a mechanical drawing so detailed it made me want to chew my hair. The sender thought I would be the perfect person to build my own solar oven. Right. Like that was ever going to happen. The idea of cooking with sunshine did, however, pique my curiosity.

A few days of intense research confirmed that I would never, ever consider building a solar oven, but instead invest in a Sun Oven. This specific oven had impressive reviews from many satisfied owners. I concluded that the few negative reviews came from people who simply failed to read the instructions. But the thing that sealed the deal? Made in the USA.

I learned that with the right collection of mirrors, angles, hinges, clamps, screws, and patience, it’s possible to cook food with sunshine alone. The more I learned, the more I believed this to be a viable option should an earthquake, storm, or some other event result in a power failure.

“Some other event” did strike: a do-it-ourselves kitchen remodel. My husband estimated it would be a three-month job, but I knew better. And I was OK with that, except for one tiny problem: My temporary kitchen didn’t include an oven. That epic remodel took nearly a year. We survived, thanks to sunshine and my Sun Oven.

During the long, seemingly unending remodel, instead of feeling like I had to use the Sun Oven as a last resort and the only way we could carry on without a regular oven, I stopped longing for a real oven, even preferring to use Sun Oven.

Once the kitchen was finished and I had choices, I didn’t stop using Sun Oven. That’s how awesome it is and fun to use. Needless to say, I am still sold on my Sun Oven, and mostly for these three reasons:

Sun Oven is lightweight and all one piece. It takes only minutes to open it, set it up, and get it into position. And Sun Oven easily collapses, making it compact and portable—about 23 pounds with a carrying handle.

The instructions that came with my Sun Oven are so clear and easy to follow that I was cooking almost as soon as it arrived. I love that it has a thermometer inside the oven so I can watch as the temperature climbs.

I can use my Sun Oven as a regular oven by refocusing it every 30 minutes to stay in alignment with the sun, or as a slow cooker by just leaving it alone to cook all day. Even after the sun goes away, as long as I don’t open the chamber, it will stay above the cooking temperature of 180 degrees F for a good three to five hours. It’s as amazing as it is simple to use.

The first time I used Sun Oven, I was skeptical. I mean, really? The sun? I needed to test this thing and opted to make it prove itself with an epic challenge. My ultimate first try was an 8-pound turkey breast, which takes about two hours at 325 degrees F in a traditional oven. The turkey in Sun Oven turned golden brown, produced amazing juices, and after about two hours, reached an internal temperature of 165 degrees F. Best of all, it was absolutely delicious.

Every time I fire up my Sun Oven, it just knocks me out that I’m taking advantage of free energy without solar panels or backup batteries of any kind. In a way, it’s a primitive method, but at the same time super fun and modern.

Solar energy is legal, readily available (even on partially overcast days), powerful, and free. Once open and in place, making sure it’s pointing toward the sun, it takes only about 20 minutes for Sun Oven to reach 300 degrees F.

There are many types of solar ovens available these days, even simple plans to help you build your own. But for me, Sun Oven meets my needs both as an auxiliary appliance and as a valuable member of our emergency-preparedness team.

This simple invention, Sun Oven, is everything I need to cook, dehydrate, bake, and even pasteurize water, should that need arise—all with the free and readily available power of the sun.

Sun Ovens are available directly from the manufacturer at SunOven.com