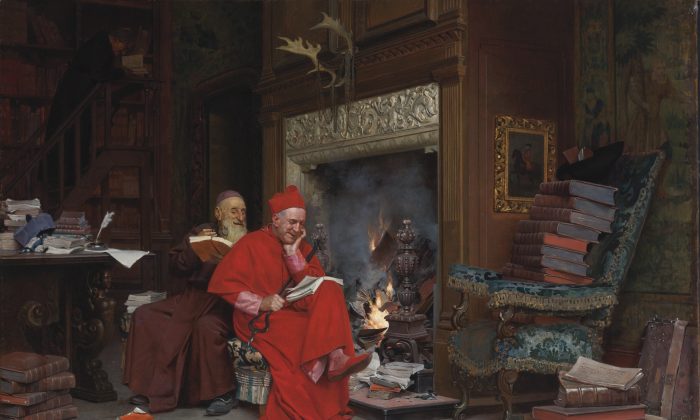 Apart from the artists who were given varying degrees of administrative power in the French Academies, there were many artists who dedicated their time solely to painting and became famous for their work without becoming involved in leadership roles.

The painter Jehan Georges Vibert (1840–1902) must be mentioned for his famous works that spoofed the clergy. Misinterpreted as silly anecdotal paintings for most of the 20th century, his works were truly an expression of freedom of speech as in many places such works were considered blasphemous. One must not forget that poking fun at the clergy would have been a serious criminal offence not that long before.

One very amusing example of his work is “The Committee on Moral Books.” This painting shows two clergymen reviewing a large stack of questionable books to deem if they are suitable for the public. The two men of the cloth sit reading and in a state of considerable merriment and laughter, undoubtedly evoked by the books’ contents, toss them into the fire. This painting is intended to point out hypocrisy in the clergy, and although humorous to the viewer, the painting is actually addressing the serious matter of censorship.

Vibert was not an artist who took shortcuts and in many of his paintings he would choose what would appear to be the most difficult choices. From extravagant wallpaper to Persian carpets, to highly articulated clothing and jewelry and opulent settings, Vibert was a technical master. However, in Vibert’s clergy paintings he was not only showing off his skill with the brush, but also denoting the rich and luxurious settings the leaders of the church enjoyed while so many others endured poverty.

Gustave Doré (1832–1883) was a highly skilled and very prolific independent artist. He was not only an important illustrator, but was especially known for dark moody landscapes and dark, difficult subject matter that many other artists of his day avoided. He had an abundance of imagination, both for the beautiful and the bizarre. Some of his most well known works depicted scenes from Dante’s “Inferno” and Edgar Allen Poe’s “Raven,” though he was also an advocate for the poor and mistreated which he exposed in his paintings with the hope to bring about social reform.

“Not an artist who can be defined by any one particular school, Doré may be best described as a visionary realist. By combining Romanticism’s drama with Realism’s social commentary and what would be Symbolism’s spiritualism, Doré produced works of startling beauty and raw emotion that are distinctly his own.”

His painting La famille du saltimbanque: l’enfant blesse is part of a twelve piece series titled Paris tel qu’il est (Paris Such as It Is). In this painting Doré tackles the subject of the poor and physically handicapped with both compassion for the realistic circumstances and profound imagination.

Lastly James Jacques Joseph Tissot (1836-1902) must be mentioned as the foremost fashionable painter of high-society. He painted “the foibles of love and defeats of passion, the shifting relationship between men and woman in a rich, materialistic society, and the self-interest of the leisured classes.” He was a master for detail and beauty, but could also capture the subtlest of human emotions. Although Tissot was a French artist, he lived for many years in England with his model muse, Kathleen Newton, whom he met around 1876. Since Kathleen was a divorcee and it was socially unacceptable that they were living together, they kept to a quieter lifestyle.

Although Tissot’s paintings brought considerable attention, he was better known in England then France and his low social profile kept him out of the kind of drama that surrounded the people of power in the art world of his day, people such as Lord Leighton or Alma-Tadema. Tissot moved back to Paris in 1882 following Kathleen’s death, at which point he painted Parisian women and finally in his later career, with a burst of spirituality, painted religious scenes and traveled to the holy lands.