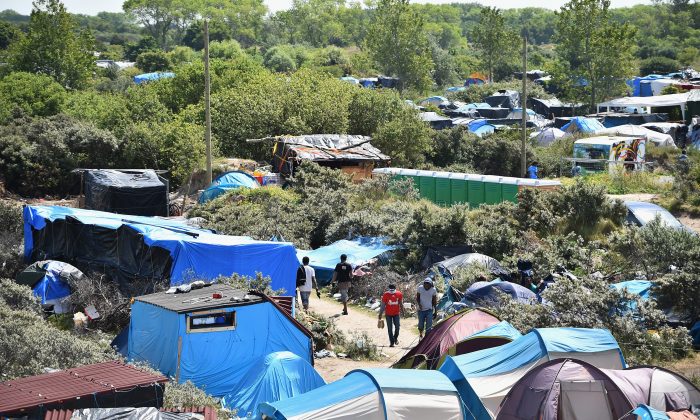 CALAIS, France—Riot police and migrants camped near the French port of Calais have clashed in overnight violence that aid workers said reflects the growing frustration of refugees’ inability to smuggle themselves aboard trucks and trains bound for England.

Calais police said officers monitoring the 6,000-resident shantytown east of the port city were pelted with rocks after midnight Monday and again Tuesday as migrants repeatedly tried to block a neighboring highway that leads to the main ferry terminal. They said 27 officers have suffered minor injuries, including 11 early Tuesday.

Aid workers said police fired tear gas canisters at rock-throwing crowds on the highway and in the camp. Migrants said sparks and heat from some canisters caused scorch damage to tents, but no serious injuries were reported as most campers sought safety inside their tents and shacks. An Associated Press journalist saw scores of spent gas cylinders near the camp.

“Police came into the camp, halfway up the main drag, and fired tear gas right into the camp,” said Rowan Farrell, a volunteer from Manchester, England, who helps to run a library and other support services for the camp.

Tensions have been mounting since France started imposing tough new security measures, including 15-foot-high (5-meter-high) razor-topped fences and increased police patrols, to stop the flow of undocumented people from reaching Britain by boat or train.

Police said they fired tear gas to force migrants off the highway that overlooks the camp and leads to cargo and passenger ferries less than 2 kilometers (1 mile) away. They said the latest overnight clashes lasted about five hours.

Campers said Muslim hard-liners in the camp were angered by news Sunday of an anti-immigrant demonstration in the center of Calais. That rally attracted barely 80 people.

But migrants and the foreign volunteers helping them in the camp say the rising nighttime unrest chiefly reflects growing frustration, particularly among young single men given lowest priority for better housing, because the tightened security has effectively killed their hopes of reaching Britain.

“There’s more and more desperation in the camp coming to a climax,” Farrell said.

Over the past two weeks, Calais police have greatly increased police monitoring of the camp, which is tolerated by French authorities but supported largely by private charities