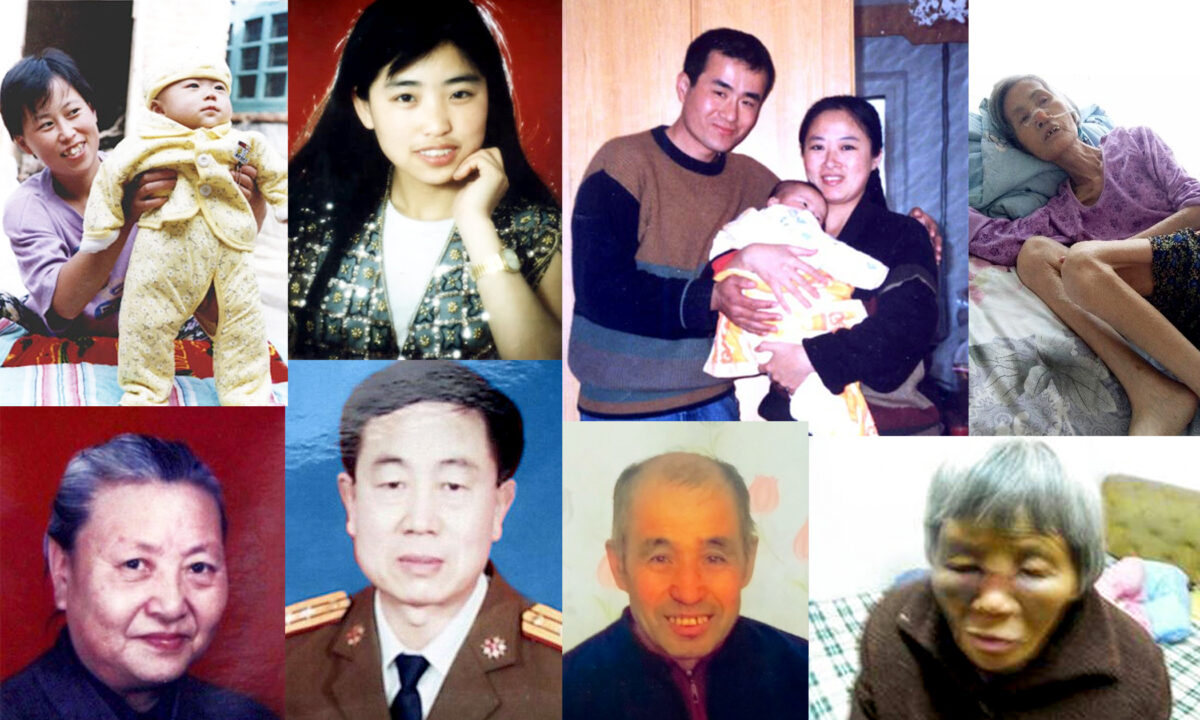 23 Years Ago, China Tried to Get Rid of 100 Million Innocent Citizens—Here’s Why

Remembering the courageous people who refused to be silenced
BY Epoch Inspired Staff TIMEJuly 15, 2022 PRINT

Over the past two decades, countless people of faith have lost their lives in communist China. And tens of thousands of them are still being persecuted there, every single day. These people face endless abuse and torture for displaying moral courage in the face of oppression.

Here, we remember 10 of these moral bravehearts, from all walks of life, who were killed for their faith.

Though the 5,000-year-old Chinese civilization was founded on faith and tradition, these very virtues are what the Chinese Communist Party (CCP) aims to uproot. Since the year 1992, over 100 million law-abiding spiritual believers—with their resolute faith in the universal values of truthfulness, compassion, and forbearance—have been quietly turning back the destructive tide of atheism, merely due to their undeniable existence in this totalitarian society.

Fearful of the soaring popularity of Falun Gong, former head of the CCP Jiang Zemin decided to initiate an unprecedented campaign of persecution on July 20, 1999, to eradicate the peaceful practice.

Rooted in traditional Chinese culture, Falun Gong, also known as Falun Dafa, is a self-cultivation practice consisting of meditative exercises and moral teachings. It was introduced in China 30 years ago, in 1992, and became hugely popular by the end of the decade, owing to its moral appeal and health benefits. According to official estimates at the time, 70 million to 100 million people were practicing Falun Gong in China. Today, Falun Gong is thriving outside China and is practiced in over 80 countries. Its adherents endeavor to be honest and virtuous, and uphold the age-old traditional thoughts of “good begets good” and “heaven accepts only kindness.”

However, the communist regime perceived Falun Gong’s presence too intimidating for the Party’s totalitarian rule—especially because the practice is bringing about a tangible rise in spirituality and restoring traditional culture, which is exactly what the Party has been persistently destroying since coming into power.

During this past 23 years of relentless persecution, countless Falun Gong adherents in China have been subjected to arrest, imprisonment, forced labor, torture, and even forced organ harvesting. Countless have been expelled from school, or fired from jobs. These people of faith usually make the majority of the CCP’s forced labor “workforce”—working for as long as 20 hours per day, often without pay, making export items like chopsticks, toys, Christmas lights, etc. Minghui.org, a U.S.-based website that reports on the spiritual practice and its persecution, confirmed that over 4,600 Falun Gong practitioners have died from the persecution, but that the actual death toll is likely much higher.

Many global news media, the United Nations, the U.S. Department of State, and Amnesty International, have reported on the severity of the persecution.

Qin Yueming, from Yichun City, Heilongjiang province, was sentenced to 10 years in 2002 for refusing to give up his faith. On Feb. 25, 2011, the Jiamusi prison authorities force-fed him, and the feeding tube ended up being inserted into his lung. He was moved into an isolated room where he died the next day. When his family saw his body, they found blood in his mouth and nose, and his facial expression showed as if he was in extreme pain. His wife and daughter were persecuted for their years-long efforts to seek justice for his death. Eventually, the prison authorities were able to pressure his octogenarian father to sign a consent form to cremate his body, which had been kept in the prison for more than a decade after his death.

Gong Piqi, a 66-year-old retired colonel and former deputy chief of staff at Shandong Province Reserve Artillery Brigade, from Qingdao City, Shandong province, was reported to have died in Jinan Prison in April 2021; he had been sentenced to 7 1/2 years for refusing to stop practicing Falun Gong. The prison authorities informed the family that he had died of a stroke. However, when the family members saw his body, there was blood in his ears, and his head was injured and swollen.

Cui Jinshi, 88, from Harbin City, Heilongjiang province, was arrested for studying Falun Gong’s teachings with other adherents on April 13 this year. She died just two hours after her arrest. When her son first saw her dead body, he found that her throat was cut open. The police didn’t allow the rest of the family members to see her body but took the initiative to call up a local funeral home. As the police have withheld her death certificate, the family is finding it hard to get an independent autopsy done. At the time of writing, her body is still kept at the funeral home.

4. A Hospital President and His Oncologist Wife

Li Yanchun, a 68-year-old retired hospital president from Qinhuangdao City, Hebei province, was imprisoned in August 2021 for 7 1/2 years, despite his “dangerously high” blood pressure. His wife, an award-winning oncologist, was incarcerated for her faith in 2019. The couple were sentenced for distributing informational materials exposing the CCP’s persecution of Falun Gong.

Wang Liuzhen, a retired metallurgical engineer in the Chang’an No. 2 Factory in Chongqing, in her 80s, died on Jan. 1 after a decade of persecution. She faced around-the-clock surveillance after authorities built a sentry box right outside her house; the security personnel often abused and beat her. At one point, she was also forcefully injected with drugs, which damaged her liver and left her blind. The constant harassment and beatings had reduced her to skin and bones before passing away.

6. Man Dies After 12 Years of Torture

Ge Zhijun, 42, from Zhuozhou City, Hebei province, died after enduring gruesome torture for a total of 12 years, leaving behind a grieving 9-year-old daughter, wife, and paralyzed father. He was subjected to extreme abuse which lead to his mental collapse. Handcuffed and shackled, he was once locked in a tiny 3-foot-long, 1-foot-wide cell for 15 days. Prison inmates who wanted to have their sentences reduced “assisted” the guards in torturing him; they would often throw him on the ground and then stand on his legs, press his chest so hard that he was unable to breathe, and burn his body with cigarettes.

Facing prolonged torture, his memory declined, and he developed a host of health issues, including hypertension and heart and liver problems. He was last released from prison in 2019. When he returned home, he mostly stayed silent and locked himself in a room, before passing away on Nov. 29, 2020.

7. A Manager Under Forest Bureau

Ma Shufang, 69, a former household affairs department manager under Tongbei County Forest Bureau Police Department, died of brain hemorrhage days after an appeals court upheld her three-year sentence in early June this year. She was arrested in August 2020, but later released on bail due to high blood pressure; she was indicted in August 2021 and sentenced to three years in a virtual trial in December 2021. After her appeal was rejected, she suffered a brain hemorrhage on June 4 and passed away six days later.

8. A Professor Falls Into Coma, Dies

Xing Wenzhen, 79, a professor at Northwestern Polytechnic University in Xi’an City, Shaanxi province, faced persecution for over 20 years before dying in October 2021. She was forced to retire early and was held in a brainwashing center for 102 days. Since the 2008 Beijing Olympics, surveillance cameras had been installed outside of her home to monitor her. In September 2021, the police harassment began again and the elderly lady couldn’t bear it anymore with her weakened body; she fell into a coma, and died in October that year.

Li Jingxia, 85, a retired middle-school teacher from Qiqihar City, Heilongjiang province, died three months after being detained in July 2020 after police monitored her phone calls. Prior to her last arrest, she had faced years of brutal persecution: The police burned her ears with a lighter, beat her with a belt until it cracked, pulled her hair, threatened to rape her, and covered her head with a plastic bag before hitting her with a thick club. In 2020, the police once again started harassing her. Faced with constant mental pressure, her health deteriorated, and she died in October that year.

Liu Qingfei, 74, from Shenyang City, Liaoning province, was arrested on Aug. 28, 2021, after police broke into his home, claiming they were there to give him a COVID-19 vaccine. He was detained for eight months and persecuted, before being pronounced dead on April 24 this year. When the family saw his body, they felt he didn’t look like a dead person; the police told them that he had died after developing a “sudden, acute condition.” The family suspect that Liu might have been pronounced dead while he was still alive. Liu’s body is currently in a funeral home, the family is seeking justice.