Father and Daughter Kicked Off Flight, Claim It Was Because of What They Said
0
Share Now
TelegramFacebookTweetEmailTellMeWeReddit
Copy Link 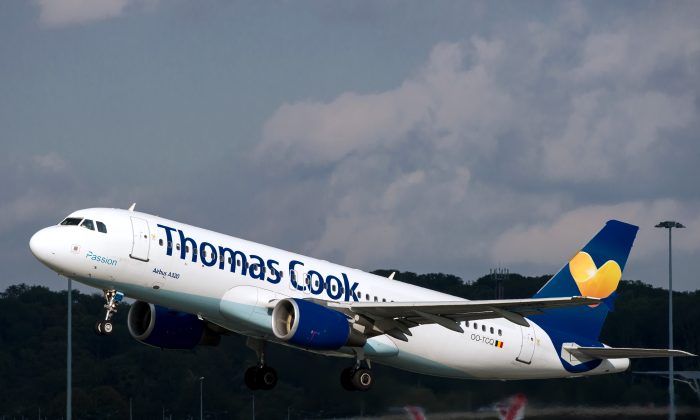 A Thomas Cook jet takes off on at the Lille-Lesquin airport, northern France on Oct. 11, 2014. (Philippe Huguen/AFP/Getty Images)
Travel News

A 21-year-old woman says she was humiliated and left shaking after being told to “cover up” or she would be kicked off an airplane when she boarded wearing a vest-like crop-top and high-waisted trousers.

Emily O’Connor had boarded a flight to the Canary Islands from Birmingham in the UK with five friends when she was told by the crew that her clothing was “inappropriate.”

Her posts about the incident, including a photograph of the outfit in question, quickly went viral, as users weighed in on whether the crew were right to demand she cover up.

The story featured in British national television and newspapers.

The airline, Thomas Cook, has since apologised for the way it handled the incident, although appeared to fall short of specifically declaring whether her outfit fell foul of company policy.

O’Connor claimed that the airline staff had been “sexist and misogynistic” because they did not ask a male passenger in shorts and a vest to cover up.

Flying from Bham to Tenerife, Thomas Cook told me that they were going to remove me from the flight if I didn’t “cover up” as I was “causing offence” and was “inappropriate”. They had 4 flight staff around me to get my luggage to take me off the plane. pic.twitter.com/r28nvSYaoY

O’Connor said she had passed through security and gate checks at Birmingham airport without an issue ahead of her flight to Tenerife. But when she boarded the plane, she was told to “cover up.”

She challenged the staff.  “I informed the staff that there is no ‘appropriate wear’ policy stipulated online,” she wrote in a Tweet. “I stood up on the flight and asked if anyone was offended.”

No-one said a word at that point, according to O’Connor.

“The manager then went to get my bag to remove me from the flight. A man then shouted ‘Shut up you pathetic woman. Put a [expletive] jacket on.'”

“The staff said nothing to him,” she wrote.

She said that the staff made comments about the incident over the public speaker system.

A Man Wearing Vest and Shorts

“I was physically shaking, and they could see that, yet they continued to sexualise and ridicule me. It was the worst experience of my life.”

Eventually, she put on a jacket belonging to her cousin, who was also on the flight.

“I couldn’t think about anything else for the rest of the holiday”, she told the Birmingham Mail. “It was all I could talk about.”

“There was a man sat a couple of rows behind me on the plane in a vest and shorts and nothing was said to him.”

“I felt they were being sexist and misogynistic.”

O’Connor, however, wasn’t so traumatised that she didn’t wear the exact same outfit on the return flight—this time without being asked by the crew to cover up.

She posted on social media about the incident once she was back in the U.K.

most random 24 hours ive ever had! @thismorning quite proud that i stood up for myself and hope it inspires others to do the same 👙🤷🏻‍♀️

Her social media posts quickly kicked up a storm of comments, with many suggesting she could have simply put on a jacket without fuss for the sake of the other passengers.

“To be honest why did you make all this fuss and not just cover up and get on with the flight,” wrote one Twitter user. “I know these tops you were wearing are indeed a top but look like a bra. I suggest you grow up.”

The airline has now apologised to her.

“We are sorry that we upset Ms. O’Connor,” said a Thomas Cook Spokesperson via email. “It’s clear we could have handled the situation better. In common with most airlines we have an appropriate clothing policy.”

“This applies equally to men and women of all ages without discrimination. Our crews have the difficult task of implementing that policy and don’t always get it right.”

The airline noted that its policy, available in the inflight magazine, states customers wearing “inappropriate attire (including items with offensive slogans or images) will not be permitted to travel unless a change of clothes is possible.”