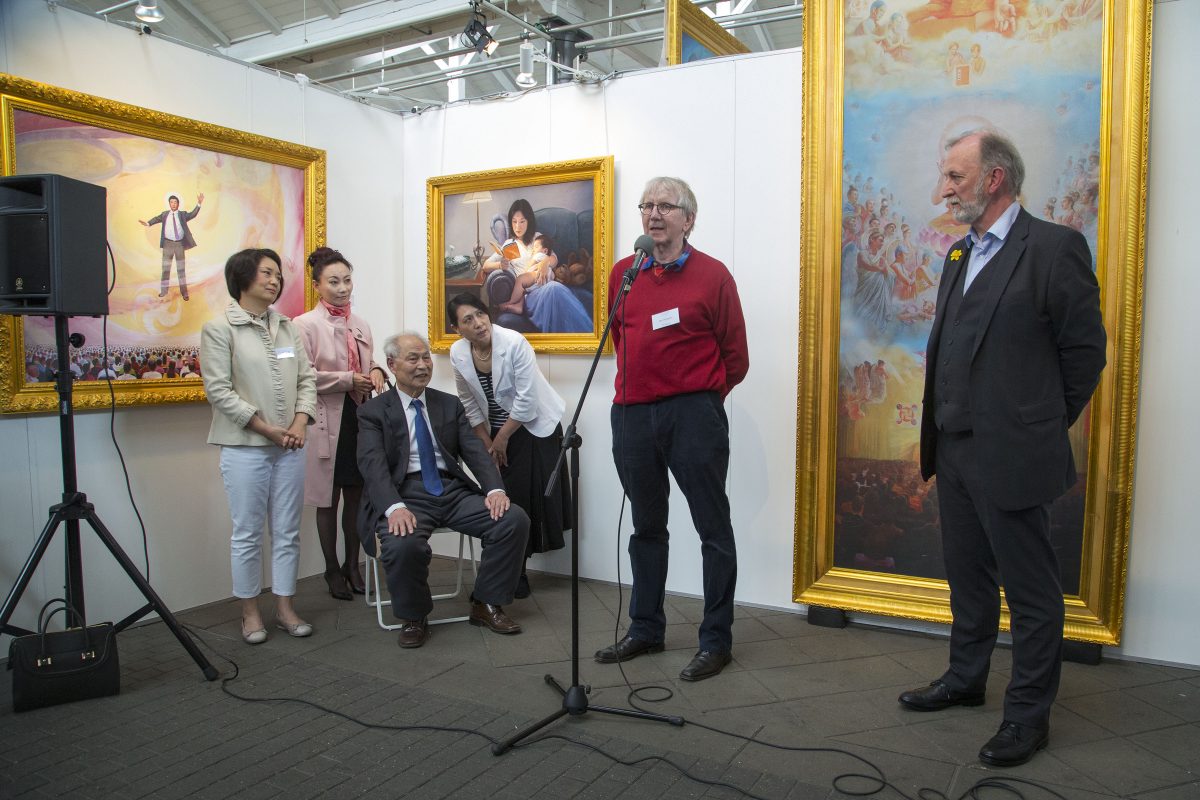 The Art of Zhen Shan Ren (truthfulness, compassion, tolerance) International Exhibition took centre-stage at the largest Scandinavian art fair, the 2014 Art Nordic in Copenhagen, Denmark, on May 9-11, the same weekend as the Eurovision Song Contest reached its glitzy finale.

Boi Wynsch, who spent a year organizing Art Nordic with his wife the painter Laynet Lore Wynsch, said that as soon as he heard that practitioners of Falun Gong wanted a space at the fair he had a duty and an obligation and a responsibility that he could not sit by and let go or pass onto someone else.

“It was a great opportunity,” he told NTD Nordic, the company sponsoring The Art of Zhen Shan Ren Exhibition for the three days at the art fair. “We are happy to be allowed to play a role in this situation and play a real active role.

“When you said that you would come and exhibit [as an ordinary contributor], it was unacceptable to us because it could be done much bigger and much better. So we decided ‘No, we will move around, make room for you—whether it’s 12 Danish or Swedish or Scandinavian artists would have to move out and find another place at the show or leave the show—because this was too important and this opportunity was like a God-given thing that we are happy to fulfill.'”

He said he had heard of Falun Gong in the 1990s and knew that the practice, also know as Falun Dafa, was being persecuted in China.

His opinion is based on 15 trips to China stemming back to the 1970s.

One consequence is that he cannot go back to China. “I am not acceptable, I am not invited any more … It is a price that has to be paid but it is a small price that I am paying compared to the heavy price that the people are paying who are exercising or are trying to exercise what in the constitution really are their rights but are not allowed.

“I feel much worse for the people in China,” he said, “[and those] who have been through the torture and the persecutions and the punishments who cannot go back to China. They are as much Chinese as anybody else but are not allowed to have the rights.”

For 14 years the Chinese Communist Party (CCP) has been using its full propaganda, policing, and military in an attempt to wipe out the practice of Falun Gong. Falun Gong is the qigong practice that grew from a handful of practitioners in 1992 to over 70 million by 1999.

The CCP had turned the Chinese away from traditional beliefs that centred on the relations of human beings to gods and spiritual phenomena and could not understand practitioners’ lack of concern for politics or the atheism of the Party. The Art of Zhen Shan Ren depicts the universal beliefs of Falun Gong and includes pieces on the persecution and torture of practitioners as well as the courageous and dignified ways in which practitioners work towards ending the persecution.

The artist collective of The Art of Zhen Shan Ren has seventeen artists showing at Art Nordic, all but one of whom is of Chinese descent, and all of whom have personal experience of the persecution.

There were 38 artworks displayed at Øksnehallen in downtown Copenhagen from May 9-11, including a Buddha sculpture by Kunlun Zhang, who helped found the group in 2003. Two of the pictures were completed very recently and were carried on a plane from New York by the artist, Amy Lee, the day before the show opened.

Mrs Lee took six months to complete the compositions in ink and coloured pigment on prepared silk which is an ancient discipline with strong ties to China’s past.

One of the new paintings, Heaven Punishes the Evil, shows the aftermath of that part of the persecution where Falun Gong practitioners have had their organs taken from them while they are alive. As they are very pure, a god, in this case a Western god with a spear, prevents the evil-doing beings from taking the practitioners and the practitioners rise to their predestined places in the heavens.