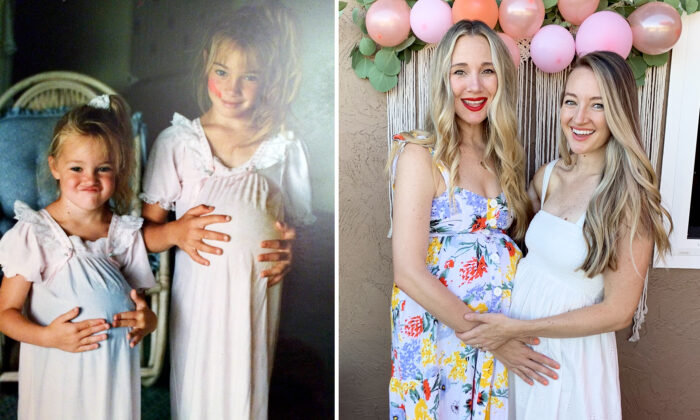 Two sisters got pregnant at the same time, enabling them to re-create an adorable childhood photo where they had balloons up their dresses, dreaming of becoming mothers.

Bri Dietz, 35, and her sister, Chaulet Barba, 33, were ecstatic when they discovered they were both expecting.

“It was so special to go through it together. It was actually a dream come true,” Bri, an Instagram influencer from San Diego, California, said.

Bri and Chaulet have always shared a special bond. They were very close growing up, playing dolls and pretending to be moms. Continuing to share the same relationship to this day, the two sisters talk on the phone each day.

“Even though we live seven hours away, the basis of what our relationship runs on now all these years later is still there, even into our 30s,” Bri said.

So when Bri was already four months pregnant with her third daughter, she found out Chaulet was pregnant just minutes after she’d taken the test.

“When we found out we were pregnant together, I said ‘do you remember that picture?’ Bri recalled. “It immediately cropped up in my brain, probably 25 years later and I still remember it!”

Nurse Chaulet, who lives in Walnut Creek, dug all around to find the picture from the 1990s where the two sisters had curlers in their hair. The pair were just 4 and 6 years old at that time and were pretending to be pregnant with balloon bumps.

So once they were both sporting bumps, they took a matching snap. “I was so excited about it, I thought it would be the cutest thing,” Bri said.

“It made it feel not only like it came full circle from playing that as a kid, but it felt like a special sister moment,” Bri added. “We got lucky to have a chance to re-create that.”

The little girls are now as close as their mothers are, and also love playing with their dolls together. Additionally, to complete the set of pregnant pictures, the two cousins have also posed in a photo identical to their mothers’, with balloons under their nightdresses.

“But that bond and that core is always there between us,” Bri added.