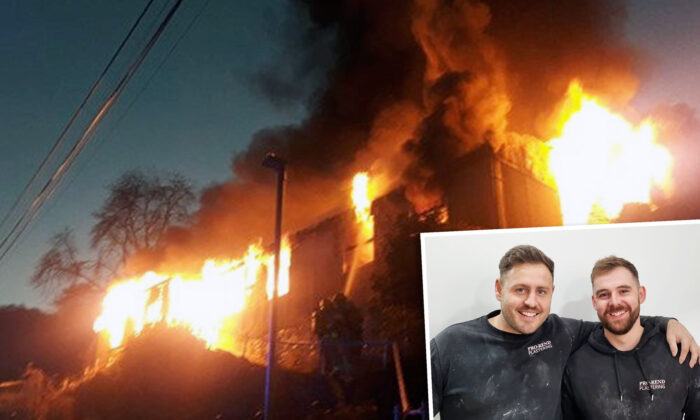 A pair of plasterers have been hailed heroes after they bravely ran into a burning building to rescue an elderly woman from a huge house fire.

James Abbott, 30, and Matthew Simmonds, 29, were driving back from a job in their van on Nov. 14 at 4 p.m. when they spotted flames engulfing a property in Wrexham, North Wales, United Kingdom.

A group of people had gathered outside the building and were shouting at the occupants to get out. Witnessing this, the pair sprang into action and courageously ran into the smoke-filled bungalow.

James and Matthew then forced their way through the darkness to a living room area where they found a confused, frail woman, in her 90s.

“We both rushed into the building, and I’ve never seen anything like it,” James, of Wrexham, said. “It was black with smoke, you couldn’t see anything except the red glow from the fire and we could hear someone talking in the living-room area.

“I thought, ‘why is somebody just casually talking away while their house is burning?’ and then we found this frail old lady sitting on a chair.”

According to James, the elderly woman was clearly confused and completely unaware of the severity of the fire. The woman, James said, had a torch and was trying to use the landline to call someone. He said, “I told her ‘you’ve got to get out.'”

The power had tripped in the house and thus even the phone wasn’t working. The only way they could navigate out of the property was by looking at the floor as the smoke was knee height and above.

“We managed to get her out just in time, as we’d only been in there a matter of a minute or two and we could barely breathe because of the level of smoke in there,” James said. “Her hair was singed, and her hands all burnt—and she was bleeding.”

For James, the entire incident was “absolutely horrible to see.”

James then ran to the other side of the building where he found another woman with a zimmer frame being helped out.

“When I got back to the front two minutes later, there were flames coming out the front door and windows smashing—it was frightening how quick it took hold,” James said.

Since the incident, James said the elderly woman’s niece has called him to express her gratitude for helping.

“We just did what any decent person would,” James said. “The place was burned to the ground, it has been completely destroyed. If she had been left in there two minutes longer she would be dead.”

All three occupants of the house, who were in their 90s, were subsequently taken to Wrexham Maelor Hospital, where two remain, as a precautionary measure.

James said that one of the three pensioners was rescued by another member of the public, who hasn’t been identified.

“I hope he gets the recognition he deserves as well because he did amazingly,” James said. “They were all frail and elderly victims. I think it was a couple who lived with their sister. It was a devastating blaze and could have been much worse.”

The Welsh Ambulance Service sent a rapid response vehicle and two land ambulances to the scene while the Wales Air Ambulance sent its land-based vehicle.

Around 20 firefighters worked throughout the night to battle the blaze, which was started by a cooking appliance, believed to be a chip pan.

Steve Houghton, from North Wales Fire and Rescue Service, said: “Firstly, I’d like to thank the community for supporting the great work of our crews in tackling this fire.”

Explaining in detail, Steve said that as a part of the firefighting operations, due to the location of the fire, they were able to use the portable pumping unit to access water from the river Ceiriog.

Local residents also gave a hand to help with this setup, which allowed firefighters to access water to tackle the fire.

“This was a serious fire in a large building, and our firefighters worked well in difficult conditions,” Steve expressed. “The residents were out of the house on our arrival, and my thoughts are with them and their family during this stressful time—we all hope they make a full recovery.”

Steve also said that the seriousness of the fire meant that there was a closure of the road, which also happened to be the only route to the valley. He thus expressed his gratitude to the residents or those traveling to the area for their patience in dealing with the tragedy.

“The devastating damage shows just how destructive fire can be—and time and time again, we attend house fires which have started in the kitchen,” Steve said. “It’s so easy to forget your cooking, especially if you are tired, distracted, or have been drinking.”

He further urged the public that they should never turn their back on cooking even if it happens for a minute and he further reminded that leaving any cooking unattended for any length of time can have disastrous results.

“Smoke alarms save lives—the early warning provided by a smoke alarm can provide vital minutes to help them escape unharmed,” Steve said. “I’d ask everyone to consider elderly or vulnerable family or neighbors, and ensure they are safe too.”