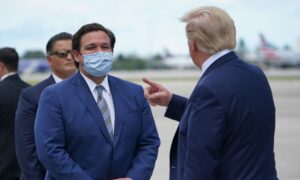 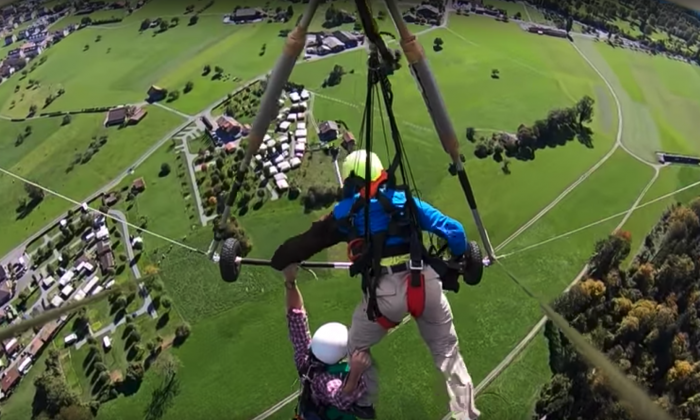 YouTuber Chris Gursky hangs from the bar of the hang-glider and his pilot's leg over the Swiss countryside in Oct. 2018. (Screengrab/YouTube/Chris Gursky)
US News

It was a bucket-list dream: To launch off the side of a Swiss mountain, to feel the rush of air and adrenaline, suspended over the trees and lakes by nothing but a hang-glider wing and a harness.

But moments after he had made the short run-up and his feet had left the 4,000-foot mountain edge, Chris Gursky knew something was wrong. As he felt his body weight drop, he realized the pilot hadn’t attached the harness that should have hung him from the tandem hang-glider.

Remarkably, Gursky, a photographer and YouTuber from the United States, was able to hang on for over 2 minutes, as his grip gradually weakened, before the pilot made an emergency landing.

Gursky was torn from the hang-glider as it landed in a gun range, fracturing his wrist.

The incident happened mid-October, but on Nov. 26 Gursky posted dramatic footage of the whole incident to YouTube, picking up around a million views in 24 hours.

He said that he bears no ill-will to the pilot, saying he was a “good guy.”

On vacation with his wife in Switzerland, they had decided to try tandem hang-gliding: An experienced pilot takes the controls, while the passenger hangs alongside, enjoying the thrills and the views.

After a practice take-off run, and having watched his wife launch safely into the Swiss mountain air, it was his turn.

“We waited a bit for the updraft to pick up and then we ran till we left the side of the 4,000-foot mountain edge,” he wrote.

“I was expecting to level out above the pilot as we went, but quickly discovered that my harness was not attached to the hang-glider or anything else.”

“My body weight shifted straight down and I found myself hanging on for my life. I remember looking down and thinking, this is it.”

His left hand was on the cross-bar while his right gripped the strap on the pilot’s shoulder, as the pilot desperately tried to get the glider under control and find somewhere to land.

“I was slowly losing my grip with my right hand as I was swinging in the wind with the glider.”

“The pilot grabbed my hand, but like in the movies it was a slow motion slipping of the grip until my right hand slipped off.

“I grabbed another strap on his left side for a bit but this slipped off also.”

“I ended up holding on the bar with the left hand and the lower part of his leg with the right when we were nearing the ground.”

Gursky’s feet hit the ground first, ripping from his grip on the pilot at about 45 mph.

“When I sat up I knew something was wrong and saw that my wrist was broken. The pilot rushed over, helped me up, and walked me off of the gun range (true).”

He had also torn his biceps tendon.

He had four hours of surgery that night, as his wrist was fitted with a metal plate. He left the hospital the next day, continuing his vacation.

“Still can’t cross hang-gliding off the bucket list till I finish a successful flight!”

Gursky said he bears the unidentified pilot no ill-will. “I am past that phase,” he told Cross Country Magazine. “He did all he could and more. He is a good guy.”