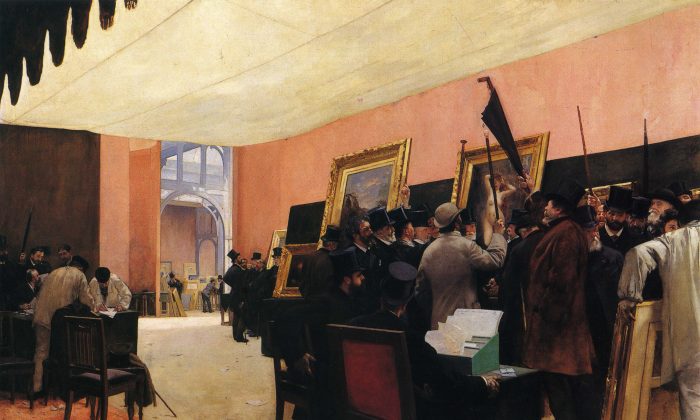 19th-Century Academic European Paintings: The Power and Influence of the Paris Salon

Since it had been vacated by the flight of King Louis-Philippe and his family, and already possessed large rooms and fine lighting, it was a perfect choice. However, the new republic immediately appropriated 650,000 francs for the erection of the Palais de l’Industrie on the Champs Elysées and after 1855, the salon was held there.

The annual Paris Salon was the art event of the year in France and, in many ways, all of Europe and America. Although it had existed much earlier, it became an annual event starting in 1864 and, just as the tumultuous struggles of administrative authority affected the Ecole des Beaux Arts and the Prix de Rome, it also affected who was shown in the Paris Salons from 1864 through 1881, when the Société des Artistes Français was finally given and maintained control over this critically important annual event. The society increased the access artists had in showing their work in the salon, which pleased many artists who had previously been dissatisfied with the manner of selection that they felt left them in the lurch.

Renoir was recorded noting to his dealer, Durand-Ruel, in 1881: “I am going to try and explain to you why I exhibit at the salon. In Paris, there are scarcely fifteen collectors capable of liking a painter without the backing of the salon. And there are another 80,000 who won’t buy so much as a postcard unless the painter exhibits there.”

The Paris Salon drew a huge mass of not only artists, dealers, collectors, and scholars, but the public as well. In 1881, for example, 314,302 visitors came to see the salon. This momentous number reiterates how important the event was not only to collectors but to the people as well, as they attended the salon in droves. It was something of which France as a nation was truly proud.

According to John Milner in his book “The Studios of Paris”:

“The organization of the annual salon was a colossal undertaking involving immense administrative work and the control of considerable sums of money, not to mention the high degree of emotional charge which surrounded the selection and hanging of several thousand works … the total exceeding 8 miles of paintings. In this context, the visitors needed real determination and extraordinary physical stamina to see any works other than the most spectacular and celebrated productions. The trials of the Salon Jury may also be imagined: they had, after all, reduced the total of works exhibited from those submitted.”

The Powers That Be

It has been said that William-Adolphe Bouguereau, as the most prominent and influential of the French Academic artists, was largely responsible for keeping all the power and glory for himself and his artist friends by only allowing their work to be shown at the Paris Salon. However, it was in fact Bouguereau who, on Dec. 26, 1890, argued with others against a proposal suggested by other influential artists such as Ernest Louis Meissonier, Puvis de Chavannes, Jules Dalou, and Auguste Rodin that works chosen by judges of the Universal Exhibition should automatically be accepted into the salon without needing to be scrutinized by the Société des Artistes Français.

Since the government organized the Exposition Universale, it was felt that this proposal would give the government power again over who got to show at the salon and to limit additional space, making it harder for the work of young, not yet recognized artists to be seen. After brewing tensions mounted into arguments and accusations that Bouguereau, other leading members, and the Academy Julian had too much power, and after a vote where the proposal lost 405 to 82, a number of artists including Meissonier, de Chavannes, Dalou, Rodin, Henri Gervex, Albert Besnard, and others promptly left the Société des Artistes Français and, in the same year, created their own organization, the Société Nationale des Beaux-Arts.

Bouguereau was then vice president of the Société des Artistes Français, and had been since 1881, but on Dec. 26, 1890, the president was absent and Bouguereau was serving as president that day. Although he tried to reconcile and bring the group back together after the schism took place, and believed he had handled the situation appropriately, he was depressed and upset by the whole experience to the point where he resigned from his position, giving up the power he had on this most important of boards.

The group then held their own annual salon, referred to as the Salon du Champ de Mars. This was not a group of Impressionists storming off to create their own organization because their work was not accepted into the salon. The leader, Jean-Louis-Ernest Meissonier, was a member of the institute and a traditional artist with tight paint handling and carefully organized and systematically designed compositions, as were most others who left the Société des Artistes Français during this legendary schism. It had nothing at all to do with Impressionists rebelling against the Academics, and everything to do with one group of Academics rebelling against an entrenched group of other Academics for totally different reasons.

According to “William Bouguereau, Life and Works,” by Damien Bartoli and Frederic Ross:

“The vote that occurred demonstrates that most of the participating artists believed that the main body had the goal of being fair-minded. … Those who left to start their own organization were only a small percent of the original body, and were clearly those who perceived their self-interest would be more likely supported in a new organization where they as founders would have much more power.”

In truth, there was much finger-pointing at the time in both directions, and two sides to the story, as there usually are. Both groups claimed to be helping young, unknown artists to show in the salon but had different ideas of how best to accomplish this.

Meissonier, the leader of the dissenters, was the antithesis of the Avant-Garde. He was principally known as a military painter with incredibly detailed work. He did large canvases, but also is well known for his cabinet-sized paintings, which included 17th- and 18th-century cavaliers. He used such small and precise brushstrokes that one needs a magnifying glass to fully appreciate them. In this sense, he is somewhat reminiscent of 17th-century Dutch masters like Gerrit Dou, Frans van Mieris, and Jan Vermeer.

Meissonier’s painting “The Guide” exemplifies his passions for French military historical subject matter. Depicting a large group of soldiers on horseback, proud and confident, the soldiers in the lead look at the guide with some disdain, their swords drawn.

At the time depicted, it was advised by French military theorist Colonel de Brack that post-revolutionary cavalry tie their local guide to a soldier’s saddle in case he tried to run, with a sword at the ready as a reminder of what would happen if he made an attempt. Meissonier depicts the guide in this picture to be outwardly indifferent to his situation, walking with focused intent and a pipe in hand.

The microscopic details in this painting are something that Meissonier was known for, from the individual faces and expressions of the soldiers, to the buttons and buckles on the soldiers’ uniforms. The moody autumn landscape helps the viewer imagine what it must have been like for both the guide and soldiers.