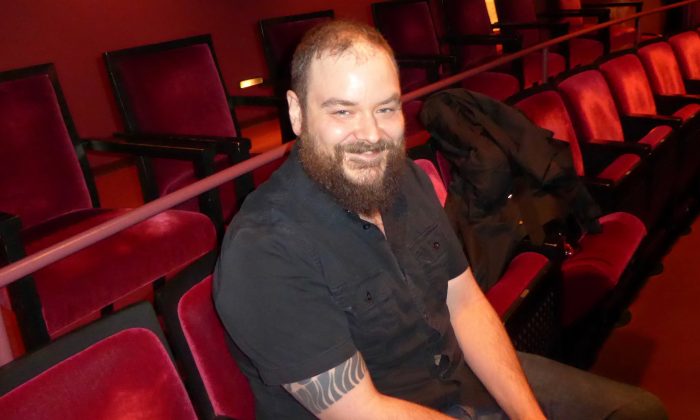 Lincoln Center hosting Shen Yun Performing Arts made quite an impression on aspiring comic Justin Murray. The co-producer of the Cunning Stunts, a monthly comedy show at The Stand Comedy Club, had never heard of the internationally touring company, and didn’t know that it is considered to have the world’s best classical Chinese dancers.

Mr. Murray didn’t know what to expect, but his wife wanted to attend. He was amazed by what he saw, and said the performance was truly fantastic and “surprisingly exciting.”

“I don’t consider myself as someone who would go to a dance performance and get a lot of excitement about it. But I’m watching this and I’m having a great time. It’s like watching a movie,” he said.

Digitally animated backdrops make the scenery as active as the dancers onstage, and help create what Mr. Murray called a visually arresting program.

He felt the interludes by the emcees between each of the 20 short programs really enriched his experience of the Chinese traditional art he was seeing, classical Chinese dance.

The dance form has almost as long a history as China’s 5,000-year-old civilization, which Shen Yun aims to recreate onstage.

One dance tells of Buddhist monks defending their monastery against the communist regime’s attack during the ’60s Cultural Revolution.

Mr. Murray found incredible the dances’ vigorous display of tumbling and aerial moves.
“They’re doing backflips and everything, it was incredible. It’s amazing,” he said.

Another dance, “Monkey King and the Dragon Palace” depicted a vignette of the classic literary work, Journey to the West. This piece stood out to Mr. Murray for its humor—that and the fact that he grew up watching “Dragon Ball,” a Japanese comic series based on that classic novel.

Overall, he found the cultural experience fascinating, and learned a good deal more about “China as it is.”

Aspiring actress and model Tatiana Galliher Jackson, also in the audience on March 10, loved classical Chinese dance as an art form and was inspired by it.

She’s studied modern ballet, African and Indian dance, but “never anything like this. This is beautiful,” she said.

“From the dance perspective, it’s very clear that there’s a very refined technique, and I … appreciate that it comes from an organic place. It seems very natural,” she said.

As an actress, that organic quality of the dance really struck her. In reading the program she learned that the inner feelings of the dancers lead their movements. “It’s the physical expression of an emotion and feeling, and I feel that,” she said.

And like Mr. Murray, she was impressed with the tumbling elements of classical Chinese dance, which looked so light and exposed how limber the dancers are.

They looked “as if they were floating across the stage rather than throwing themselves and tumbling. It’s clear that they have all of the skills and the training and the forms are just beautiful,” she said.

“Definitely inspired. I want to learn to do this!” she said.