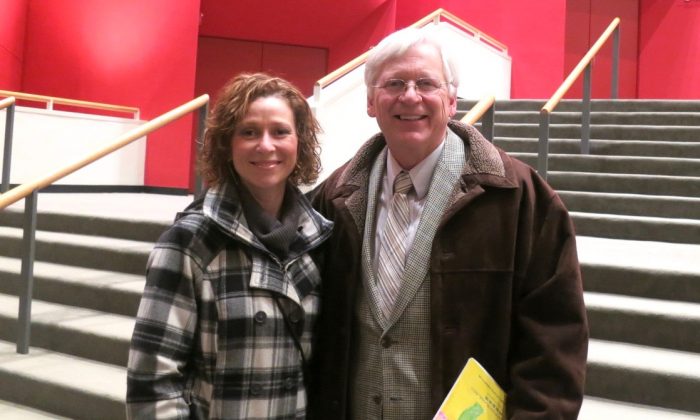 Barbara and Greg Anderson found the Shen Yun performance to be meaningful, spiritual, and joyful at the Des Moines Civic Center on Feb. 16, 2016. (Stacey Tang/Epoch Times)

DES MOINES, Iowa—He had spent 10 years in Asia, had once been married to a Chinese woman, and thought he knew a lot about China, yet Mr. Greg Anderson felt that Shen Yun Performing Arts really added to the depth of his understanding of China. He felt it personally and so deeply that he cried several times during the performance.

He cried at the beauty. He cried at spiritual connection lost to a people but now being rediscovered.

Through classical Chinese dance and music, the sense of divine inspiration that had once been part of the fabric of Chinese life is being restored by Shen Yun—restored after systematic political campaigns by the Communist Party had nearly eliminated it.

“The people were suppressed for a long time, and they were cut off from God and their spiritual life, and they are longing to return, and it’s a kind of a beautiful thing,” Mr. Anderson said.

With a career that varied from Navy chaplain to rehearsal pianist for London’s Royal Ballet to professional organist, Mr. Anderson brought several perspectives to what he’d seen at the Des Moines Civic Center on Feb. 16.

The dances that depicted state brutality of the faithful rang true for Mr. Anderson.

“I have met people who had to escape from China with their lives,” he said. A “guy that was scared to death because … people were executed right before his eyes,” he said, to corroborate that what the dances had shown onstage was real.

As a pianist who accompanied a world class ballet company, Mr. Anderson knew how much goes into achieving beautiful dance.

“I know how much, how hard they worked just to be together,” and yet the precision of Shen Yun astounded to him.

Classical Chinese dance, which alongside ballet, is one of the most comprehensive dance systems in the world, is known for its expressiveness. For this reason, Shen Yun uses the art form to tell stories from China’s 5,000-year history.

And the theatrical stories appealed to him as someone involved with the theater arts over the years. In particular, he enjoyed the characterization of the young emperor, Kangxi, as depicted in the dance “Defending the Throne.”

As a professional musician he assessed the orchestra as wonderful: “Oh my, they just were so solid all the way through. And the mixture of the Chinese instruments, it was very, very, well orchestrated,” he said.

Shen Yun’s orchestra relies on a few Chinese instruments to give the distinctive flavor and carry the melody of the original compositions, while Western instruments harmonize and provide lush support.

Accompanying Mr. Anderson to the theater was his daughter, Barbara Anderson, who owns a natural food and supplements store. She summed her feelings of traditional Chinese culture as joyful.

“I was not aware of the happiness” of the culture, Mrs. Anderson said.

As for Mr. Anderson, he wished he could have seen Shen Yun a long time ago. “This really gave much more meaning” to what he experienced in life.

“I loved it, it just was very meaningful and spiritual,” he said.