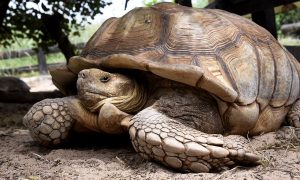 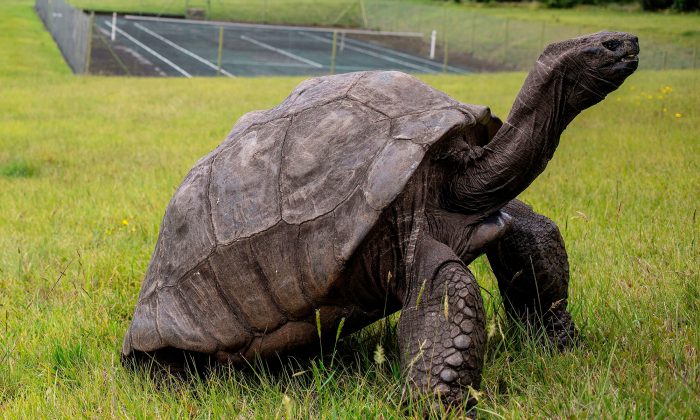 187-Year-Old Jonathan the Tortoise of St. Helena Is the World’s Oldest Land Animal

If you ever have the chance to visit St. Helena—a volcanic island situated remotely in the South Atlantic Ocean—make sure to drop by Plantation House to catch a glimpse of the 187-year-old Jonathan, said to be the oldest land animal now living on Earth.

Jonathan the tortoise is so famous that he’s even been listed as one of the seven wonders of St. Helena, and his portrait appears on the island’s five-pence coin.

Born circa in 1832, Jonathan was originally from Seychelles in the Indian Ocean.

The tortoise was brought to St. Helena Island, an overseas British territory, when he was 50 years old in 1882. He was given as a gift to the then-governor, William Grey-Wilson.

Having lived longer than any human, the majestic tortoise has witnessed the Russian Revolution, two World Wars, and 39 U.S. presidents.

During Jonathan’s time on Earth, historic events have occurred: the first photograph to include a human form was taken in Paris by Louis Daguerre in 1838, the incandescent light bulb was invented by Thomas Edison in 1878, and the first powered flight was flown by the Wright brothers on Dec. 17, 1903.

“He is a grand old gentleman who has seen it all,” Teeny Lucy, the chairperson for the local SPCA and one of Jonathan’s caretakers, told The Dodo. “He has seen generations of people coming and going.”

When Jonathan was younger, the agile tortoise reportedly crawled into the governor’s lawn to disrupt croquet matches and went under tables at tea parties, damaging the chinaware.

In his old age, Jonathan now spends his golden years roaming around the lush gardens in Plantation House—the official residence of the governor of St. Helena. He loves basking under the sun, but during the scorching heat, he goes under the shade.

“On mild days, he will sunbathe—his long neck and legs stretched fully out of his shell to absorb heat and transfer it to his core. It’s an odd posture and before now we have had panicked phone calls to say he appeared to have died! On cold winter days, he will dig himself into leaf mould or grass clippings and remain there all day,” said vet Joe Hollins in an interview with Guinness World Records.

The old reptile is not alone, though. He has three other tortoise companions—David, Emma, and Fred.

“Being the oldest land animal in the world, he has almost royal status here,” Lucy said. “He is dignified and interacts in a friendly way as long as people move slowly around him. We are all very fond of him.”

Other than some medical issues that concerned his diet a few years ago, the oldest resident of St. Helena is still going strong and has excellent hearing. However, he has age-related problems. He’s likely to be fully blind due to cataracts and has lost all sense of smell.

“As befits his age, Jonathan is gentle and enjoys the company of people,” Hollins said. “He also has a fascination with the sounds of tennis when the paddock court is in use.”

The grand old gentleman knows his food is here—carrots, lettuce, cucumber, pears, and apples—whenever he hears the caretakers calling him.

“He knows my voice and he knows the vet’s voice and reacts by walking toward us,” Lucy said. “It’s all about the food!”

At 187 years old, Jonathan has lived past his life expectancy of 150 years, and he is only one year away from beating the title of Guinness World Records’ oldest chelonian—currently held by Tu’i Malila, a pet of the Tonga royal family between 1777 and 1965 that died at the age of 188 in 1965.

Vet Hollins feels honored to be able to care for the oldest-known land animal in the world.

“For a veterinary surgeon, to have the oldest-known living land animal under his care is a great privilege, and something I could never have envisaged happening. I have bonded with him and am very fond of the crusty old reptile!” Hollins said.

As to the secret to Jonathan’s longevity, vet Catherine Man told AFP, “Reptiles have a slow metabolism, they breathe slowly, they eat slowly, and live a long time.”

“But perhaps his stress-free lifestyle here, and the clean air help explain his longevity,” Man added.