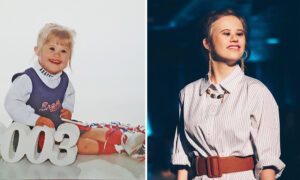 Girl With Down Syndrome Was Told She Had 'Failure to Thrive,' Defeats Obstacles, Helps Others
0
Share Now
FacebookTweetParlerEmail
Copy Link 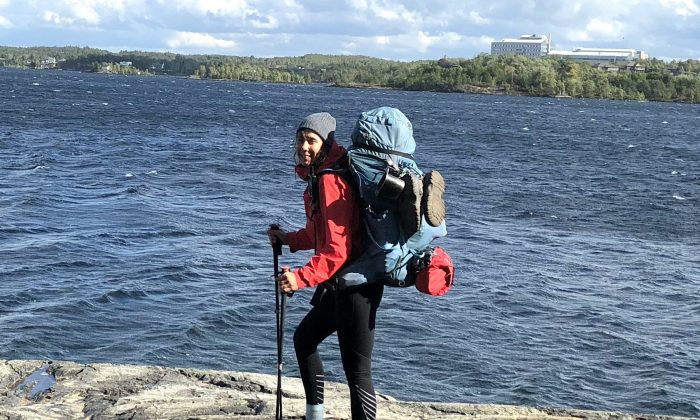 Melanie Vogel on Canada’s Great Trail in Sudbury, Ontario, as she continues her 15,000-kilometer hike from coast to coast. (The Epoch Times)
People

In the endless hustle of modern life, it’s rare to pause and reflect, let alone pack a bag and leave it all behind, on foot, for years at a time.

But doing that, and experiencing the profound beauty and calm of a solo trek through nature, has given Melanie Vogel a perspective few people get to have. Her epic walk is a moving meditation, one that she could continue for years to come.

Vogel is walking solo across Canada by way of the southern stretch of the Great Trail (formerly the Trans Canada Trail), which totals 24,000 kilometers (15,000 miles) from East to West to North.

She began in Cape Spear on the Avalon Peninsula near St. John’s, Newfoundland, the most Eastern point of the country, and will finish at Mile Zero in Victoria, on Vancouver Island in British Columbia—the 15,000-kilometer east-west leg of the trail.

She carries everything she needs to live in a 50-pound backpack.

Vogel spoke of her journey during a stopover at a cafeteria in Sudbury, Ontario, during a storm. She had already been hiking for a year and three months and estimated it will take her two-and-a-half to three years in all to reach the West Coast.

“I traveled two years in Asia back in 2011 to 2013, and it felt that so many of my values had changed during that time,” she said. “In fact, I got the travel bug and really wanted to go traveling again.”

The idea to hike the trail came to her suddenly, though Vogel spent 11 months learning about the Great Trail before embarking. The trail is the longest recreational trail in the world consisting of more than 400 different trails.

To prepare, she did survival training, boned up on bear safety, applied for sponsorship, and researched gear.

“Then came the day when I booked my flight and I thought, okay, it’s real now, I’ll really do it,” she said. “As the plane took off May 31 [2017] from Toronto, I had tears of happiness running down my cheeks. I was on my way into my next big adventure.”

Melanie, 43, moved to Canada from Germany in 2008. She lives in Toronto and works in the nonprofit sector. An avid traveler, she has so far visited 32 countries. Traveling, she said, gives her a feeling of “incredible personal freedom.”

“I’ve always felt that when traveling I live more authentically my true self, and that’s what I love about it. Now on the trail, I get plenty of time to do so. Walking through nature is very inspiring for me because you’re in such a peaceful place.”

The Great Trail runs through a variety of landscapes: urban, rural, and wilderness. There are many small communities and towns as well as some major cities along the way so there’s ample opportunity for Melanie to buy supplies, use Wi-Fi, and recharge electronics.

Even though she tries to stay offline as much as possible while on the trail, she has been documenting the day-to-day happenings on her website, betweensunsets.com, and on social media such as Facebook, Instagram, and Twitter.

Vogel camps at night, although finding a suitable spot to set up her tent isn’t always easy. Sometimes people who live close to the trail invite her to their home for a comfortable sleep in a bed.

“I meet people on the trail, or people reach out to me on Facebook and invite me to stay. The support and hospitality of Canadians is quite amazing,” she said.

Hiking the trail has helped strengthen both her mental and physical resilience. When she began the journey, she averaged 15 kilometers (9 miles) a day; now she is able to walk 25 to 50 kilometers (15 to 31 miles) at a time.

For her safety, Melanie carries bear spray, a bush knife, a whistle, and an emergency light. But she’s not too worried about animals, as she knows how to protect herself. She said people have told her she should make noise as she walks to scare off bigger animals such as moose and bear, but in fact, she tries to proceed quietly at times in hopes of encountering wildlife.

“Walking across such a big and wild country, of course, I want to see some wildlife,” she said.

“An indigenous woman told me that she would ask the animals to let her pass safely through their habitat when she was traveling through the forest. She said you can either say it out loud or think it, and that’s what I do now.  This and other spiritual rituals bring great peace to my mind. It’s almost like you’re sending your peaceful request into the universe and it will bounce back in harmony as if it will just happen that way.”

Melanie describes the long hours alone on the trail as “a walking meditation.”

“The effort we put into yoga and meditation exercises for body-mind centering happens quite naturally on the trail,” she said.

“I have never felt so content in my life than this past year.”

However, there are still times when she gets overwhelmed by her thoughts, and when that happens she distracts herself by singing or focusing more on her surroundings.

“I can get carried away by the wonder or the explorations along the trail. This can be little things, like a turtle … or even a caterpillar crossing my way.”

“I also enjoy watching the shape and growth of trees and plants lining the trail. Finding beauty in nature is incredibly satisfying and makes me feel deeply connected.”

For Vogel, her epic walk is a time of long tranquility in which she can to immerse herself in nature with a freedom of mind few of us experience. No weight but the pack on her back, no obligation but her survival and natural duty to be kind and engaged.

She’s not sure when she will stop.

“I’ve planned to go from the Atlantic Ocean to the Pacific Ocean, but there’s also the option to go North to the Arctic Ocean.”