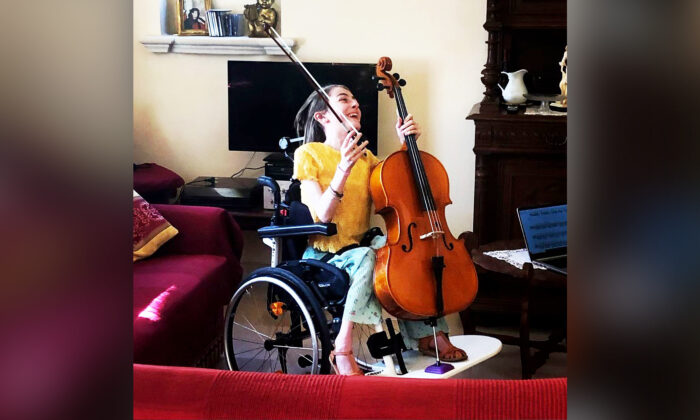 A talented 15-year-old with a never-give-up attitude and passion for music hasn’t let a rare muscle disease and scoliosis come in the way of becoming a concert cellist performing solo around the world.

Valentina Irlando, a student and classical cellist from Italy, was diagnosed with her condition when she was just a kid.

Owing to her condition, Valentina, who is a wheelchair user, struggles with basic things like picking up a glass of water or a book and going to school, she told The Epoch Times. However, with help from kindhearted individuals around her, she tends to get past the daily challenges.

When Valentina was a little girl, she enjoyed playing the piano at her uncle’s house. She was even gifted a toy piano by her parents one Christmas and she enjoyed playing it, but stopped after a while and didn’t go back to it for years, according to Classic FM.

However, three years ago, a then-12-year-old Valentina rediscovered her love for music. After watching the romantic-comedy musical “La La Land,” she began playing the piano.

In 2020, she fell in love with the cello. “Now it is my main instrument,” Valentina told The Epoch Times. “I want to become a professional cellist.”

Valentina, who plays classical music, trains for at least two hours each day, honing her skills.

Detailing her practice sessions, Valentina says that she begins with the scales, then does some Études, and finally practices the pieces that she is working on.

However, the process is not always smooth, and like everyone, Valentina, too, struggles to stay motivated each day.

“The cello is so hard and with my conditions it is even harder!” Valentina said. “Sometimes I wish I could play like normal people.”

But with the help from her teacher, Laura Ferulli, she strives forward and continues to amaze both audiences around the world and netizens on her social media accounts.

Valentina says Laura has grown to become the most important person in her life.

“Our relationship is so special and I couldn’t imagine my life without her,” Valentina said. “ I always call her ‘cello mommy’ and I love her so much.”

Describing Laura as “sweet,” “kind,” and “positive,” Valentina says she really enjoys her lessons. She is not only grateful to Laura for motivating her but also for being by her side each day.

The teen, who has three other siblings, has played solo concerts around the world and says that she has reached over 15 million video views on her social media accounts. She is often told by people who watch her enthralling performances and follow her that her pieces are very “moving.”

“They usually cry when I play,” Valentina said.

However, Valentina, who is inspired by cellists Jacqueline du Pré and Gautier Capuçon, says that she just enjoys the atmosphere and loves playing despite all the challenges she faces due to her condition.

Having won many accolades, Valentina says that her next adventure will be attending a conservatory.

“I can’t wait,” she said. “I love concerts … so I’m looking forward to the next performances.”

Watch some of her inspiring performances: