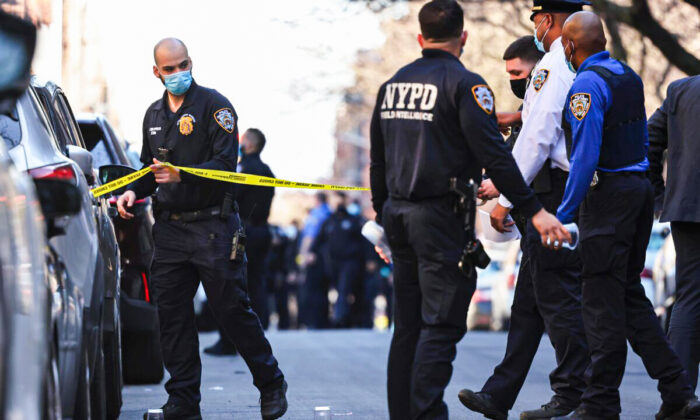 NYPD officers respond to the scene of a shooting that left multiple people injured in the Flatbush neighborhood of the Brooklyn borough in New York City on April 6, 2021. (Michael M. Santiago/Getty Images)
Crime and Incidents

A 12-year-old boy has become the first minor to die in a shooting in New York City in 2022, after he was fatally shot by a stray bullet on March 31.

Police confirmed that the boy had been sitting in a parked car with two relatives in Brooklyn when he was shot in the head by stray bullets after gunfire erupted on East 56 Street and Linden Boulevard in East Flatbush just after 7:45 p.m.

The boy had been sitting in the vehicle alongside a 20-year-old woman, who was in the driver’s seat and was also shot during the incident, and an 8-year-old girl who was not injured. The three had been eating inside the vehicle, a sedan, when bullets started flying on the street.

“Once again I’m standing here before you to brief you on another senseless shooting, this time a shooting involving the death of a 12-year-old child,” Assistant Chief Mike Kemper, commanding officer of Brooklyn South, said at a Thursday night press conference from the scene.

WATCH as @nycmayor and NYPD executives provide an update into tonight’s shooting in the confines of @NYPD67Pct. https://t.co/19hiSQ7VQd

The boy has been seated in the front passenger seat at the time of the incident, police said. He was struck in the chest and head and transported to Kings County Hospital, where he was pronounced dead.

The woman was shot in the right cheek and the upper leg, according to officials. She was also taken to Kings County hospital where she underwent surgery and is expected to survive, police said.

It is not clear what relationship the three individuals in the vehicle had but family friends of the victims told New York Daily News that the 12-year-old boy’s mother worked at a salon close to where the shooting occurred and that his 20-year-old female cousin had picked up both him and the 8-year-old girl to drive them home.

Police are searching for two vehicles, both black sedans which were spotted fleeing the scene, and asking for the public’s help and assistance in identifying those who may have been involved in the shooting. Officers are also searching the surrounding area and CCTV footage.

NYPD officer said it is not yet clear what, if any, motive was behind the shooting.

Mayor Eric Adams visited the scene where the fatal shooting took place on Thursday night to deliver a press conference where he vowed to find those responsible and noted that more innocent lives has been taken through gun violence.

“We’re going to catch this shooter,” Adams said. “But as long as we have guns and a revolving-door system, we are going to continue to come to crime scenes like this. It’s time for it to stop, that’s why we are here.”

The death of the 12-year-old marks the first fatal shooting of an individual under 18 in New York City so far this year, and the second child killed in a criminal manner.

The first child, 6-year-old Rozara Estevez, was stabbed to death in early March alongside her mother, Gabrielle Muniz, 26.