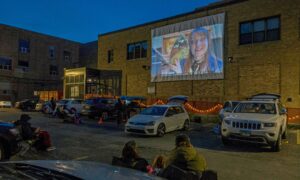 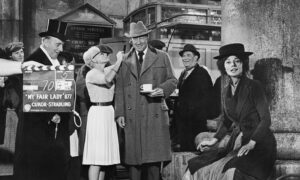 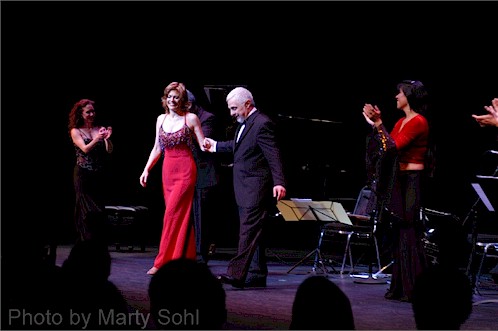 Pianist Polly Ferman and composer Daniel Binelli (both center) take a bow after an appearance together. (Marty Sohl)
Performing Arts

100 Years of the Tango by Pianist Polly Ferman

NEW YORK—Polly Ferman, an accomplished pianist who specializes in music by South American composers, gave an enjoyable and informative concert in the intimate Marc A. Scorca Hall at the National Opera Center.

The concert of “Habaneras, Milongas, Tangos” was designed to celebrate the 100th anniversary of the famous tango “La Cumparsita” by Luis Matos Rodriguez. The composer came from Ferman’s native country of Uruguay.

Playing works composed over the last 100 years to bring the tango up to the present, Ferman introduced each of the pieces and spoke about the composers. She also showed a short film with excerpts of tango dancing, including the sultry tango of silent movie star Rudolph Valentino with Beatrice Dominguez from “The Four Horsemen of the Apocalypse,” and Jack Lemmon and Joe E. Brown from “Some Like it Hot,” along with a Tom and Jerry cartoon.

While many assume the tango came from Europe, it is actually based on rhythms that were brought to the Americas by African slaves. It is no coincidence that the first piece on the program, “Ojos Criollos” (Creole Eyes) was by Louis Moreau Gottschalk (1829–1869), a piano virtuoso/composer from New Orleans—one of the centers of the slave trade. He also spent time in the Caribbean and South America. Designated as a Cuban dance by Gottschalk, the 1859 piece seems to be an influence on the later ragtime composers.

Another forerunner of the tango is the habanera, which emanates from Cuba. “Habanera” (1885), named for Havana, is by French composer Emmanuel Chabrier (1841–1894). The composer later orchestrated the piece but Ferman played the original piano version.

Argentinian Ástor Piazzolla (1921–1992) is the most significant figure in the New Tango movement. As Fermin explained, he was a controversial figure because his tangos, incorporating a jazz influence, were written for listening rather than dancing. “Oblivion” is haunting while “Adiós Nonino” (Farewell, Granddaddy) is rhapsodic.

Ferman ended the concert with “Images of Buenos Aires” (three short pieces) that Daniel Binelli composed for her. At the conclusion, the composer took a bow.

The concert was an affirmation of Ferman’s sovereign keyboard technique and feeling for the tango in its various forms as well as the importance of this body of Latin American music and its antecedents.