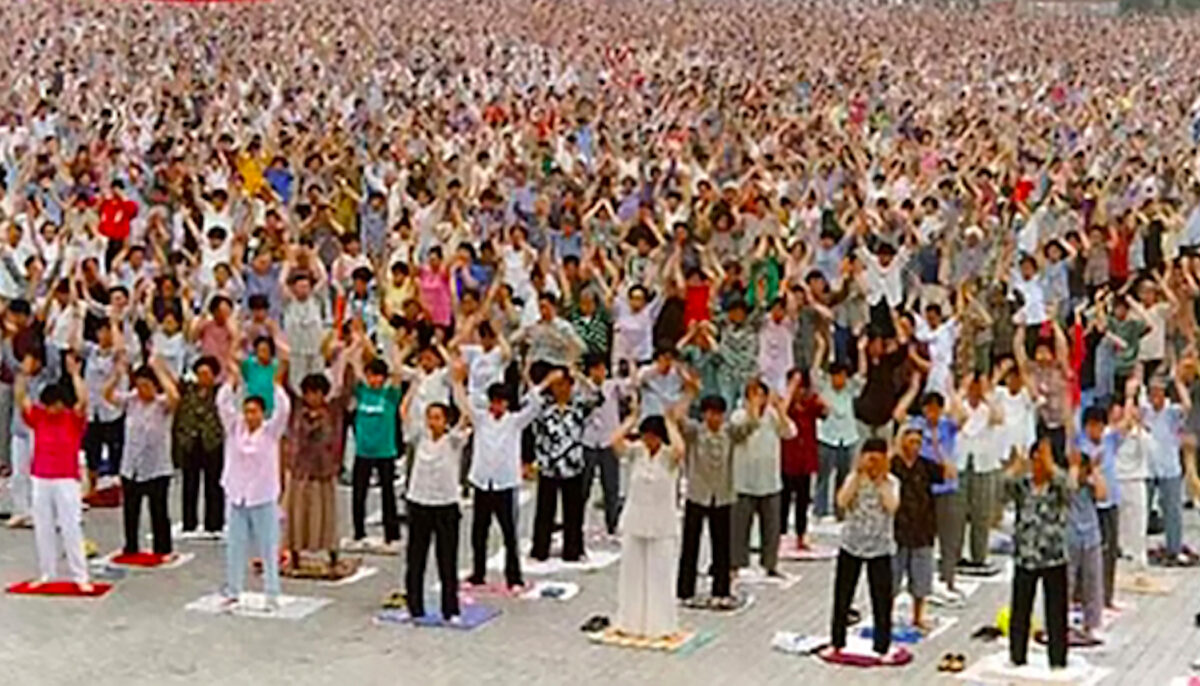 Photos: 100 Million People Practiced These Exercises by 1999, but Where Are They Now?

If you’ve ever been to China, you’ve probably seen that people enjoy practicing different forms of qigong (energy) exercises outside, mostly in parks. However, back in the early 1990s, there was one slow-moving meditative exercise system that was becoming increasingly popular before almost all of its practitioners disappeared overnight.

Tens of thousands of people, from all strata of society and of all ages, who came together each morning in different public parks throughout communist China to perform this qigong’s gentle exercises for an hour or two before heading off to work or school, were suddenly nowhere to be seen after the fateful day of July 20, 1999.

What was this practice? Why were people so drawn to this particular meditation system? And why had all these common, law-abiding citizens disappeared?

The origins of qigong in China run deep, and people are most drawn to qigong for its positive effect on one’s health. Qigong is a system of Chinese meditative exercises, and there are many kinds. But one form of qigong emerged in 1992, which was completely free and encouraged people to improve themselves from within.

Introduced by Mr. Li Hongzhi in 1992, Falun Dafa (also known as Falun Gong) became a household name during the 1990s. People nationwide were telling their friends and family to practice this self-cultivation system of mind and body because it was the real deal—many people who gave Falun Dafa a go reported improved mental and physical well-being and the healing of illnesses that Western or Eastern treatments couldn’t cure.

People embraced Falun Dafa, not just for its meditative exercises but also for its moral-teaching component, which can be summarized in three words—“truthfulness, compassion, and tolerance.”

Those with bad tempers were able to improve themselves and become more tolerant. Those with strained relationships with their spouse or family members were able to achieve a harmonious home environment. Those who were students or workers would focus on how to be better students or better workers. These people were inspired to conduct themselves according to higher moral standards.

Merely one year after introducing the spiritual system to the public, Mr. Li won all the top prizes at the 1993 Oriental Health Expo held in Beijing, including the “Cutting Edge Scientific Progress Award” and the “Special Gold Prize,” and was awarded the title of “Most Popular Qigong Master.” Falun Dafa was also recognized as the “Star Qigong” school.

The official newspaper of China’s Ministry of Public Security—the People’s Public Security News—praised Mr. Li for his contributions “in promoting the traditional crime-fighting virtues of the Chinese people, in safeguarding social order and security, and in promoting rectitude in society,” according to a report by the Falun Dafa Information Center.

Mr. Li is a four-time Nobel Peace Prize nominee and was nominated by the European Parliament for the Sakharov Prize for Freedom of Thought. He is also the recipient of Freedom House’s International Religious Freedom Award, the report stated.

Back then, the Chinese Communist Party’s (CCP) state-run media was reporting on the virtues of Falun Dafa and estimated the number of practitioners by 1999 to be around 70 to 100 million.

This mind-body discipline spread by word of mouth, and even high-ranking officials in the Chinese regime were practicing it.

Yet, all this changed when former communist party leader Jiang Zemin perceived Falun Dafa’s popularity as a threat to the regime’s totalitarian rule and its atheistic Marxist ideologies. Jiang ordered the regime’s security forces to “eradicate” the peaceful practice, and an unprecedented misinformation campaign involving China’s entire state-run media apparatus was put into full force, with the intention to turn public opinion against Falun Dafa.

“Ruin their reputations, bankrupt them financially, and destroy them physically,” was Jiang’s instruction to the Ministry of Public Security and police.

When this genocidal campaign of persecution began, terror swept across China.

Nobody would dare mention the words “Falun Dafa,” or “truthfulness, compassion, and tolerance.” If they did, they’d risk arrest, torture, and even death at the hands of the Chinese police. China’s heavily censored telecommunications industry and the internet can detect any of these words, and police are dispatched straight away upon tracking the user’s origin.

Just like that, 100 million practitioners who used to enjoy practicing these meditative exercises in parks nationwide weren’t able to do so anymore.

Former party leader Jiang also set up an extralegal organization known as the “610 office,” which oversees the persecution and deals solely with the persecution. They use the nation’s GDP and foreign investments to fuel the persecution. According to a report from Freedom House, “The estimated annual budget for all 6-10 Office branches nationwide is 879 million yuan [approx. US$135 million].”

More shockingly, the CCP is using the countless Falun Gong practitioners who are unlawfully detained in jails as an organ pool. Many practitioners have testified to having their blood drawn and being cataloged.

A June 21, 2016, report by The Epoch Times reveals that it was Jiang who ordered the harvesting of Falun Dafa practitioners’ organs.

Bai Shuzhong, the former health minister of the General Logistics Department, said to undercover human rights investigators last year in a telephone call: “At the time, it was Chairman Jiang. There was an instruction to start this thing, organ transplantation.”

The report said that Bai, who was speaking at a time of political upheaval, had been led to believe that he was talking to internal Party investigators. He said that it was Jiang who “gave an instruction … to sell kidneys, do operations,” and “after Chairman Jiang issued the order, we all did a lot of anti-Falun Gong work.”

After extensive investigations into China’s organ-harvesting syndicate, former Canadian Secretary of State, Asia-Pacific, David Kilgour, JD confirmed, “we come to the regrettable conclusion that these allegations are true.”

Investigative journalist Ethan Gutmann labeled it as “a new form of genocide.”

After an 18-month investigation, an independent people’s tribunal concluded in its full judgment in March 2020 that prisoners of conscience have been killed in China for their organs on-demand “on a significant scale.” According to the tribunal, the main organ supply came from imprisoned Falun Dafa practitioners.

The judgment took note of evidence like extremely short wait times offered by hospitals and blood testing of imprisoned Falun Dafa practitioners and other ethnic minorities like Uyghurs.

“Such short-time availability [of organs] could only occur if there was a bank of potential living donors who could be sacrificed to order,” the judgment said.

Whilst in June 2021, a group of human rights experts affiliated with the United Nations said in a statement that they were “extremely alarmed by reports of alleged ‘organ harvesting’ targeting minorities, including Falun Gong practitioners, Uyghurs, Tibetans, Muslims, and Christians, in detention in China.”

“We are deeply concerned by reports of discriminatory treatment of the prisoners or detainees based on their ethnicity and religion or belief,” the experts said.

Marking the 22nd year of the start of the persecution in China, around 1,500 Falun Dafa practitioners congregated in Washington on July 16 to call for an end to the Chinese communist regime’s decades-long persecution of the spiritual practice.

As awareness is continuously raised about the CCP’s state-sanctioned live organ harvesting, people worldwide are signing petitions and organizing peaceful sit-in events in front of Chinese consulates the world over to call on their governments to stand up to the Chinese regime, to call for the immediate release of all practitioners, and to immediately stop the persecution of Falun Dafa.