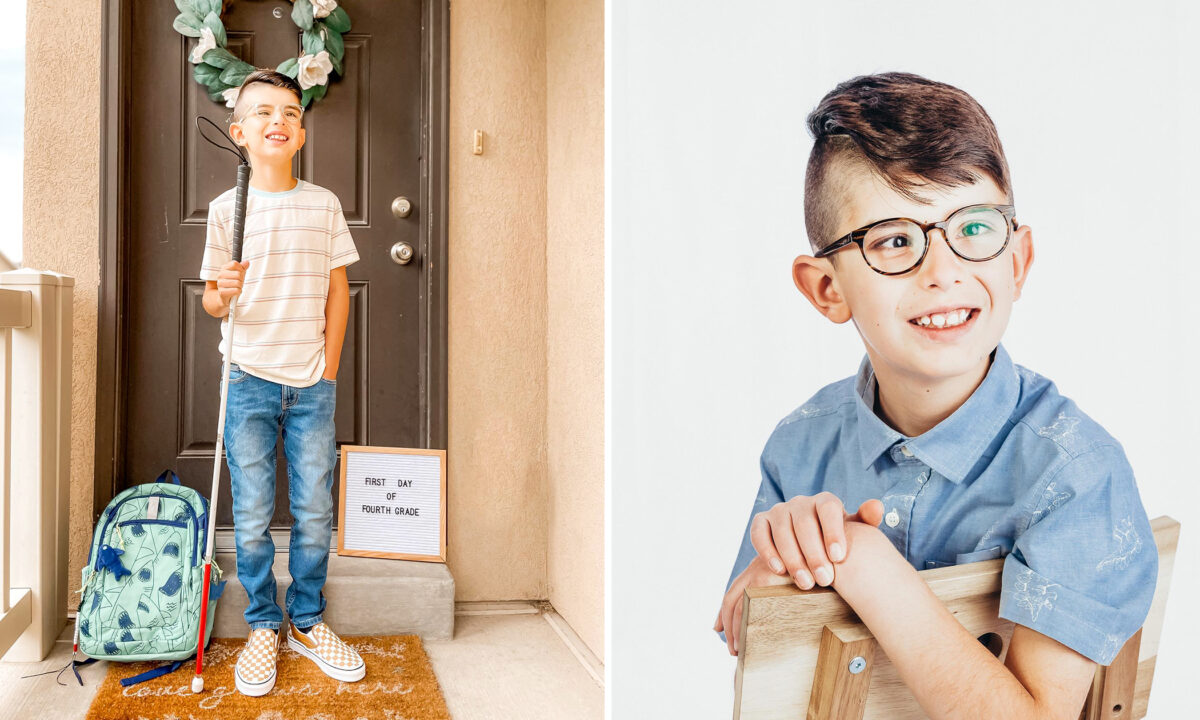 (Courtesy of Our Blind Side)
People

Although at first glance it would seem unlikely, Ashton Dunford has no limits. The 10-year-old is blind from birth, and yet, he has done all of the same things—perhaps even more—than most kids his age.

Ashton, who is Tyler and Hilda Dunford’s second of three children, does not see the limits that could hold him back.

Instead, he rides bicycles, skis downhill, and dreams of future accomplishments such as becoming a writer, a marine biologist, and a downhill skier in the Paralympics. At his young age, he has already learned to play the piano, performed in a children’s choir, auditioned for movies and television, and won awards for writing in Braille. And every feat, every milestone passed along the way, has been an inspiration to others—perhaps most of all, to his mother.

“He has changed our lives and is teaching so many others that blindness does not get in the way of doing all the things he wants to do in life,” his admiring mother, Hilda, 32, from Utah, told The Epoch Times. “We are both so proud of him for being fearless and so determined to show everyone how much he can do without sight.

“I just want him to know how much I admire him for taking on challenges with so much courage and teaching me that there are no limits. The only limits are the ones we create ourselves in our heads. He is blind, but nothing stops him from being just as independent as any other 10-year-old.”

When Ashton was about 2 months old, his older sister, who was then 4 years old, startled him as he lay on their parents’ bed. The baby boy reacted by lifting his arms to the sound of his sister, but his face never turned to look for the source of the sound. Hilda, finding this odd, obtained a referral for an MRI with an ophthalmologist.

Ashton was first diagnosed with optic nerve hypoplasia, and then later with septo-optic dysplasia. His optic nerves and some parts of his brain failed to develop in utero, leaving him blind at birth. He also lacks the corpus callosum—a nerve-fiber bridge that connects the left and right halves of the brain—and needs hormone replacement therapy to produce thyroid, growth hormone, and hydrocortisone.

Recalling the time that they received his diagnosis, Hilda said: “I remember being heartbroken and feeling like our world was falling apart. I had never been around a blind child before and I knew nothing about raising one. I had so much to learn from all of his therapists, doctors, and the school of the blind.”

And learn she did.

Above all, Hilda has learned that her son has tenacity and hunger for life that spurs him to charge forward without obeisance to his natal adversity.

Ashton wrestled with development as a young child—finding it hard to seize upon the same accomplishments that most children his age could do breathlessly. Fine and gross motor skills eluded him; things like nursing were challenges, as was holding up his head or taking his first steps.

“Every single milestone took so much effort and lots of work from physical therapy and developmental specialists, but he always reached them at his own time,” Hilda said.

But, milestones he did reach. And, as he passed each one with vigor, Hilda looked on in exultation, carefully storing her memories like precious gems.

“He took his first steps in our kitchen. He was around 18 months, and it was beautiful to watch him walking with his arms stretched out to reach his big sister. He smiled the whole way and then fell into her arms,” she recalled.

Then, at age 7, Ashton learned to ride a bicycle. He had been practicing with a balance bike for some time, but he soon learned that other kids had pedals. He mentioned his desire to try riding a pedal bike like the other kids.

Shortly after that, his father brought home a bicycle with pedals. They took the bike outside and, within 10 minutes, Ashton had figured it out. He ran into the house pronouncing victory to his family, again proving that his limits were invisible.

Even skiing was no exception.

When Ashton was 5 years old, the family registered for an adaptive ski family camp in Park City, Utah. Although Hilda was nervous about the idea of her son zooming down a snowy hill, Ashton was eager to learn. With the help of his “amazing” instructors, he dispelled any doubts and brought tears to his mother’s eyes as he skied down the mountain holding onto a bamboo pole. Now, skiing is one of Ashton’s favorite sports, and the whole family has learned to ski as a way of supporting him.

One day, Ashton plans to learn to ski unaided by the bamboo pole. And why not?!

“I always tell my kids that they can do hard things. And we are always rooting for them and supporting them in any way we can,” his mother said. Ashton is not afraid of hard things, and his family is not afraid to let him try.

(Courtesy of Our Blind Side)

(Courtesy of Our Blind Side)

As the mile markers grow in number each time Ashton is the victor over a challenge, Hilda says she “will always be his number one fan rooting for him and knowing how far he’s come since the day he was born.” She already has a wealth of memories tenderly recorded, and, as she tells about them, she is unpacking each precious gem and holding it to the light with fond admiration.

Even with a cache already full of jewels, Hilda is poised and ready for more—still learning lessons from Ashton’s bravery, determination, and pluck.

“Being Ashton’s mom taught me to change my perspective from seeing with my eyes to seeing with my heart,” she said. “Witnessing his growth the last 10 years has been more beautiful than I ever could’ve imagined.”