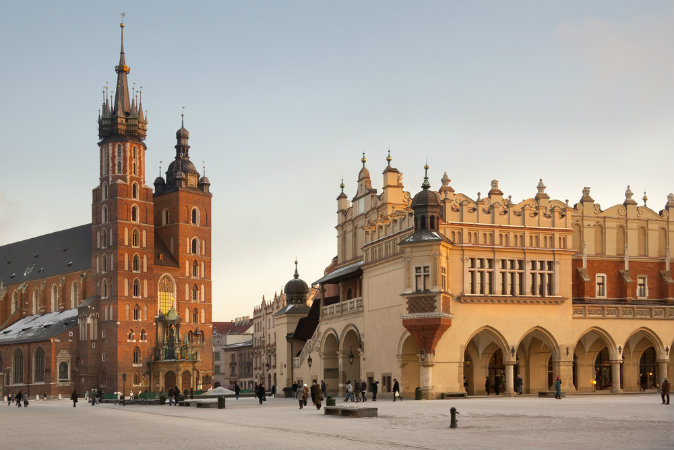 Church of St. Mary and the Cloth Hall in Krakow via Shutterstock*
Travel

10 Reasons Why You need to Visit Kraków

Elle Croft from A Bird in the Hand Travel explains why she thinks you should visit Kraków, one of the oldest and most picturesque cities in Poland…

Although Eastern Europe once seemed remote, secretive and a little bit edgy, it now finds itself planted firmly on the tourist map, with visitors flocking to some of the region’s most popular cities. Destinations such as Prague, Budapest and Dubrovnik are becoming almost as familiar to European explorers as the traditional hotspots of Paris, Berlin or Barcelona. But Eastern Europe is a vast expanse of the continent, and there are many treasures that are yet to join the ranks of their better-known counterparts. If you’re searching for a destination that’s vibrant, fascinating, easy to navigate and just a little bit unusual, look no further than the Polish city of Kraków. Here are 10 cracking reasons to visit Kraków…

1.You Get to Eat Pierogi

If you’re keen to sample some local flavours, make sure you try pierogi, a type of dumpling that can be served as a starter, a main or even a dessert. These dumplings are made of a simple dough which is then filled with a sweet or savoury mixture before being closed in a calzone-like shape and boiled. Savoury pierogi are usually served with crispy fried onions on top, and sometimes with sour cream to dip them in. If you’re in the city for any length of time you’ll have a chance to try these delicious treats as they’re served in almost every cafe and restaurant around Kraków.

2. Drink Coffee From a Wardrobe

Why sit on a regular seat when you can enjoy a beverage from the comfort of a wardrobe? In Café Szafé, wardrobes have been brightly painted and turned into comfortable seats – or perhaps nooks would be a more appropriate description – complete with plush curtains or even doors. The cafe, which serves hot and cold drinks, prides itself on its steady stream of literary clients including writers, poets and cartoonists. Come here for a cosy escape from the cold and a generous portion of inspiration.

3. Explore the Biggest Square in Europe

The main square in Kraków is Europe’s biggest medieval town square, although it’s so much more than just an impressive statistic. Right in the centre of this huge paved square is a Renaissance-style building called Cloth Hall, which is filled with market stalls selling local clothing and jewellery, and towering above the entire square is St. Mary’s Basilica. This gothic church that dates back to the 13th century is spectacular inside and out, and worth the small fee to step inside and admire the ornate floor-to-ceiling décor.

Poland has been producing high-quality vodka since the middle ages, so it’s no surprise that you’ll find the liquor in abundance in Kraków. From the commonly consumed cherry vodka, Wiśniówka, to deliciously sweet Krupnik, a honey vodka that’s often served hot with spices and lemon and plenty of other variations in between, you’re bound to leave the city with a new favourite flavour.

Gluten-free travellers will be pleased to hear that there is a restaurant with a complete gluten-free menu – including pierogi – in Kraków. Pod Baranem can often be found near the top of ‘best places to eat in Kraków’ lists as its menu is traditional, hearty, delicious and reasonably priced. Gluten and non-gluten eaters alike will love the food, the exceptional service and the warm, cozy atmosphere at Pod Baranem.

It’s hard to imagine that just an hour away from the city of Kraków, historical atrocities took place in UNESCO World Heritage listed Auschwitz-Birkenau concentration camps. One of the largest camps in Europe, it’s now a museum that’s well worth a visit. Take one of many half-day tours from the city and be prepared for a harrowing day that will leave you educated and incredibly sad. Still, it’s an important slice of history that needs to be seen to be believed.

Copyright © 2015 by Global Grasshopper. This article was written by Elle Croft and originally published on globalgrasshopper.com.

*Image of Church of St. Mary and the Cloth Hall in Krakow via Shutterstock

*Image of Pierogies via Shutterstock