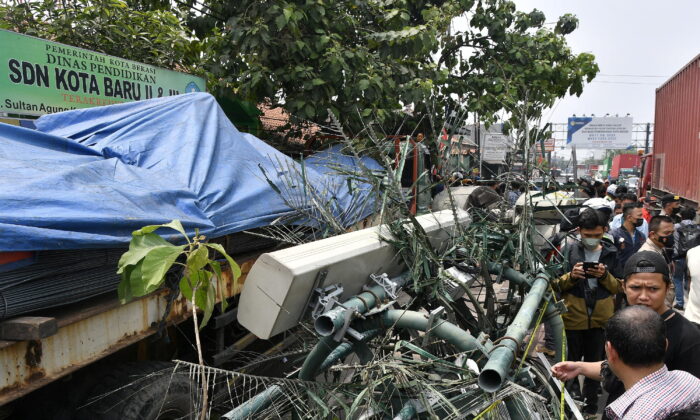 People stand near debris after a truck crashed onto school children in Bekasi, on the outskirts of Jakarta, Indonesia, on Aug. 31, 2022. (Antara Foto/FakhriHermansyah/via Reuters)
Asia & Pacific

10 Killed in Indonesia in Truck Crash Outside School

BEKASI, Indonesia—At least 10 people have been killed, including some children, after a truck crashed on Wednesday near a bus stop outside a school in Indonesia’s West Java Province, police said.

The students were waiting at the bus stop after class in the city of Bekasi, when the truck veered toward them and crashed into two motorcycles, and toppled a concrete communications tower, traffic policeman Latif Usman said.

Usman said 20 children were also injured in the crash.

“We are conducting an investigation to assess if the brakes failed,” said Usman.

Another police official in Bekasi said the driver had been detained.

Images from the scene showed the communications tower had fallen across the road outside the school’s gates and crashed into the bus stop on the sidewalk.