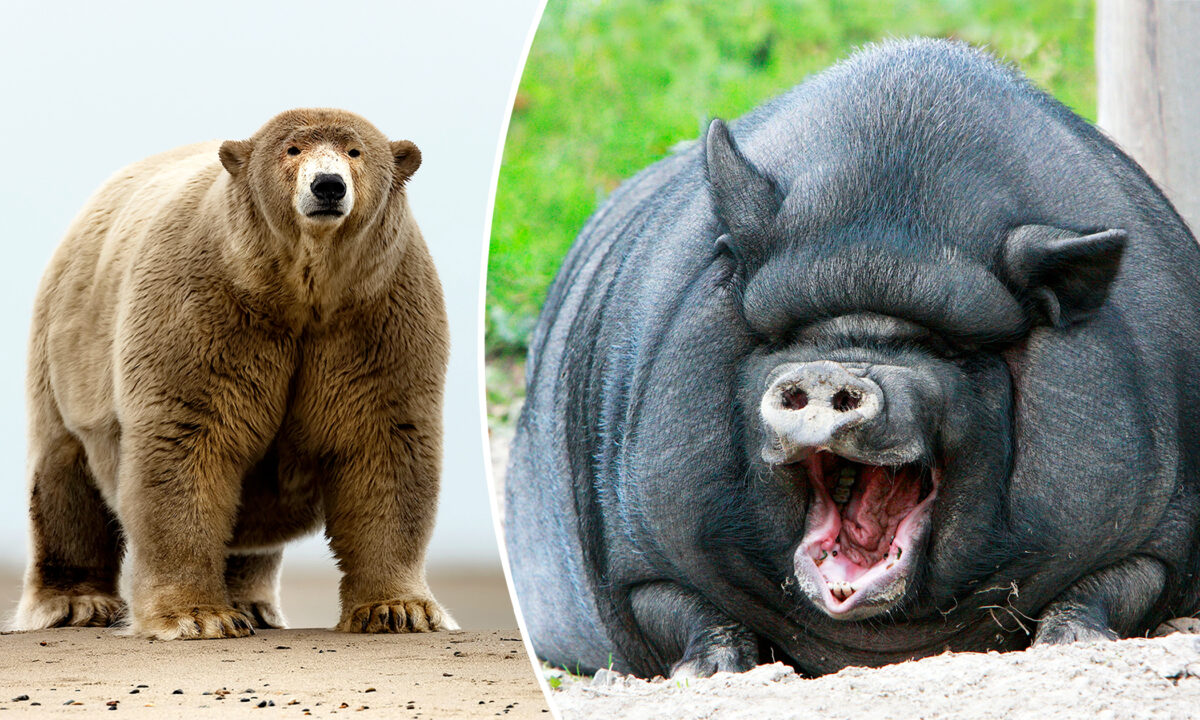 From overweight dogs to hefty pigs, this series of 10 pictures will be sure to give you a laugh and reassure you that you aren’t the only one who has indulged too much and is preparing to start and follow a diet this year.

Ed Boudreau, 58, who works as a professional nature photographer, captured the image of a polar bear, an oversized chunky bear in Alaska. The polar bear looks like he has piled on the festive pounds and is ready to start his 2022 diet after he was snapped waddling with a larger-than-life belly.

The bear looked much more rounded than his friends, which got him the nickname Fat Albert. Boudreau was amazed when the oversized bear slowly made his way into view with his stuffed belly dragging beneath him.

Wildlife photographer Leighton Lum snapped this hilarious shot of an Atlantic grey seal with his oversized mother as they relaxed on the sand on Skomer Island off the Pembrokeshire coast. This silly seal looks like he’s had too many mince pies as he sprawls on the beach with a bulging belly. It’s time to say goodbye to the treats as he prepares for his 2022 health kick.

This overweight gorilla is fed up with talking about his Christmas weight gain and 2022 diets. He looks very unimpressed and gives the figure to anyone who mentions his protruding belly.

You can hardly spot this obese orangutan as its face melts into its double chin which is even resting on its belly! It’s time to kiss goodbye to those unwanted rolls as it prepares to start its 2022 health kick.

They say the camera adds 10 pounds, but this diver’s picture captures the incredible moment he came face to face with an abnormally large shark.

John Moore, 55, was freediving near Jupiter, Florida, when he snapped the huge female amongst a shiver of bull sharks. John says she hadn’t been missing any meals. It could be time for this shark to jump on the “new year, new me” bandwagon and kickstart her 2022 diet, too.

This Vietnamese pot-bellied pig knows it’s time to kiss goodbye to the tasty treats like the majority of us humans. Goodbye mince pies and cheese boards, hello fruit and vegetables.

Jo Angell from Milton Keynes, Buckinghamshire, spotted an enormous juvenile kestrel. It seems humans weren’t the only ones piling on the pounds during the festive period, as this kestrel appears rather on the heavy side, too.

Tony Cooper, from Lincoln, photographed this chubby-looking squirrel as it perched on some wood. It seems like the squirrel needs to shed some timber before its summer body is ready.

Georgie Porgie is a 70-kilogram (154-pound) obese husky. After a few too many treats, he is just as ready as the rest of us to get back into shape.

Bianca is a chubby Siamese cat that weighs almost 3 kilograms (6.6 pounds) more than the average cat, and is more than ready for her 2022 body transformation.