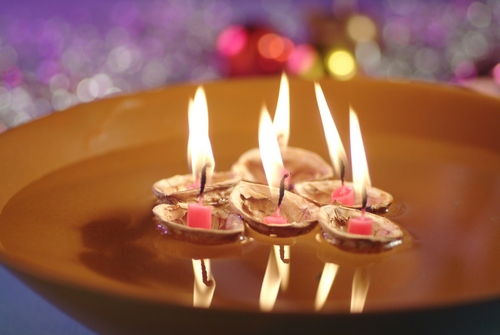 During a festive Christmas dinner on Dec. 24, Slovakians put karp scale under their plates to bring prosperity and luck in the next year. Another Slovakian tradition is said to tell the future. After festive baking, many walnut shells are found in the kitchen. Small candles are put inside the shells and each person takes one to place in water, where it will float. Whoever’s candle goes out first is who will be the first to die.

Instead of Santa, an old witch with a broomstick named La Befana brings Italian children presents. On Jan. 5, she comes down the chimney just like Santa to bring presents and sweets to children. Rather than milk and cookies, children leave her wine and food as a thanks.

A tree covered in spiderwebs. (Shutterstock)

When in Ukraine, don’t be scared if you find a spiderweb hidden in a Christmas trees. It’s said to bring luck, and Ukranians use artificial spiderwebs on their trees. Ukrainian legend says that a poor woman once found a Christmas tree growing in her yard in the summer. Although her children were happy to finally have a nice tree, she didn’t have the money to decorate it. But when they woke up on Christmas day, the tree was covered with sparkling golden and silver spider webs. The spiders had decorated it for them.

While in some countries witches bring presents at Christmas, in Norway it’s all different. On Christmas Eve, Norwegians hide their brooms to prevent witches from doing bad tricks.

Christmas in Venezuela is inseparably connected with roller skating. From Dec. 16–24, some streets in Caracas, Venezuela, are closed to let rollers rule the roads.

Yule Lads are depicted on a billboard in Dimmuborgir national park in Iceland. (Wikimedia Commons)

Iceland is famous for its strong traditional heritage that has remained alive in these modern times. An Icelandic traditional Christmas includes not only one, but 13 Santa-type figures. Known as Yule Lads, a different one comes every night for 13 days to knock on childrens’ windows and bring them presents.

And they are not alone. Their mother Grýla, part animal and part troll, comes to the town as well. She is responsible for naughty children, trying to teach them good lessons. Grýla and the Yule Lads live in the mountains.

Their family is completed by a fiendish Yule Cat. Every Icelander should get a piece of clothing for Christmas, and whomever doesn’t will either be eaten by the cat, or will have his food eaten by the cat, according to various versions of the story.

On Dec. 13, Swedes celebrate the patron saint of light, St. Lucia. Following the tradition, the oldest daughter wakes up before dawn. Wearing a crown made of leaves and candles, and dressed in a long, white dress, she goes to every bedroom in the house, bringing light as she serves coffee and treats to each member of the family.

A young woman wearing a Santa hat works on a “snowman” made out of sand on Bondi Beach in Sydney, Australia, on Dec. 25, 2007. (Ezra Shaw/Getty Images)

In sunny Australia, sandy traditions have developed without the snow. Many flock to Bondi Beach in Sydney, for example, sporting Santa hats on Christmas day.

The Christmas dinner table is set with extra plates in Portugal as a way to remember the loved ones lost over the past year. Families thus show respect for those who’ve died and express hope that their souls are at peace. Some other European countries have similar traditions. In Portuguese, it’s called “consoda.”

A person dressed as Black Peter in the Netherlands. (Shutterstock)

In the Netherlands, they celebrate with Sinterklaas. Who’s that? It’s the man who arrives on a boat from Spain in the middle of November. The Dutch prepare for his visit by polishing their shoes, writing poems, or singing songs until Dec. 5. On this day, he finally gives them presents.

But he is not coming alone. His helpers—known as Black Peters—are all said to have diverse supernormal powers. For centuries, they have been depicted with big white collars and faces painted in black. The tradition has raised some controversy in recent years, as it recalls the offensive blackface used in theater and film.

According to an old story, Saint Nicholas once set free an Ethiopian slave called Pieter. The boy was so grateful, that he decided become a lifelong helper to Saint Nicholas. Sinterklaas is the Dutch Saint Nicholas, and the Black Peters represent that Ethiopian boy.