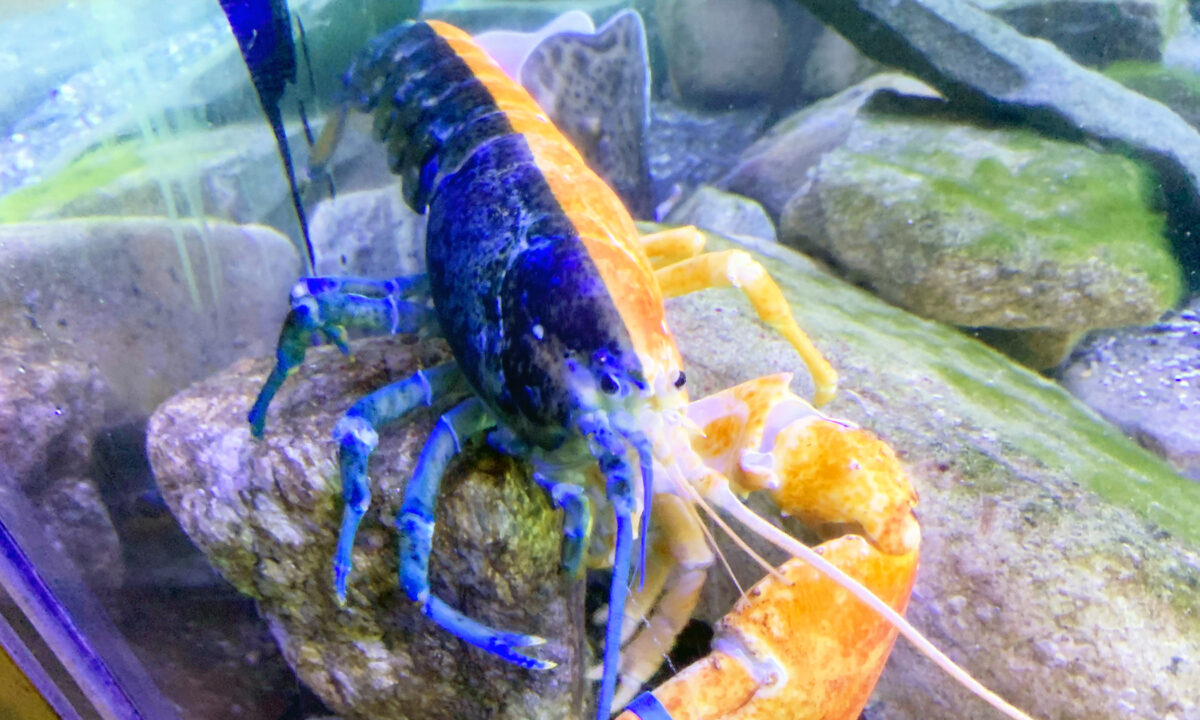 The Seacoast Science Center in New Hampshire acquired an ultra-rare blue-and-orange lobster believed to be a 1-in-50-million specimen. Just weeks ago, it was put on display in its new tank for slack-jawed visitors to wow over.

The crustacean’s strange coloration likely results from a genetic mutation at a very early stage in its development when cellular split forms its left and right sides of its body. One side is blue and the other orange, split symmetrically down its length in a near-perfect straight line.

The center posted photos on Facebook, and it’s quite a sight to behold.

Even stranger, the specimen is neither entirely male nor female; its mutation, called gynandromorphism, causes one side (its blue side) to be male and the other (its orange side) female, having genitals of both sexes.

Senior aquarist at the center Rob Royer told The Epoch Times that they acquired the lobster from the Maine State Aquarium in April 2020 under special circumstances during the pandemic.

“They were either releasing or giving to other aquariums their inventory, so I was able to get a few stars, things for our touch tank, and also this lobster was available.”

Judging from the lobster’s size—1 1/2 pounds—Royer estimated it to be about 7 to 8 years old.

“Currently right now, we do have a blue lobster, too, but that one, it’s actually not as rare,” he said. “A blue lobber’s like one in one or two million; but this one being both colors and split like this is one in fifty million.”

Lobsters are typically reddish-brown and express several distinct pigments—including yellow, red, and blue—but gynandromorphism can cause abnormalities during embryonic development. Besides blue and split-colored lobsters, according to the Science Center, a red lobster occurs once in 10 million; a yellow lobster once in 30 million; and a white or albino lobster once in 100 million specimens.

The mutation can occur not only in crustaceans but also in insects, such as butterflies, and in birds.

Currently, the center’s orange-and-blue acquisition is settling into its new environment nicely.

“It is in good health, it seems like it’s been eating which is good” Royer said, noting that staff have been feeding it chopped-up squid, shrimp, and clams. “It hasn’t molted for us right now, but presently its actually regrowing one of the claws.”

He explained: “Usually, it has a pincher claw which is long and skinny and then a crusher claw, which is much wider and really strong, for crushing shells and stuff.

“A lobster and crabs can regrow claws, antenna, and even their eyes.”

The spectacular specimen is currently on display for visitors to enjoy at the Seacoast Science Center where a special tank has been set up for the crustacean—complete with its very own cave—for easy viewing.