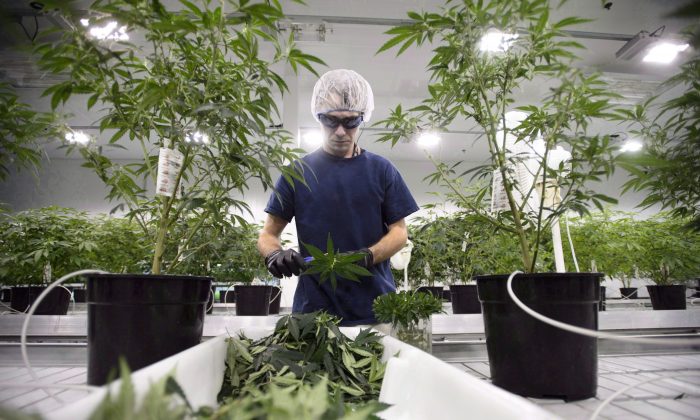 A worker at Canopy Growth Corporation's medical marijuana facility in Smiths Falls, Ont., on Feb. 12, 2018. Recreational marijuana will be legal on Oct. 17 and public-health officials want to remind Canadians that cannabis is a drug that is addictive for some. (The Canadian Press/Sean Kilpatrick)
Health

Yes, Marijuana Can Be Addictive

The business world is salivating at the potential $22.6 billion recreational marijuana market in Canada, with more new pot users expected after legalization on Oct. 17. But public-health officials want to remind Canadians that cannabis is a drug that can be addictive—contrary to popular belief.

Currently 22 percent of the adult population consumes recreational marijuana in Canada, but a further 17 percent show a willingness to try it once it’s legal. If that happens, the pot industry would eclipse the sales of beer, wine, and spirits combined, a 2016 Deloitte report suggests.

Before pot becomes legal across the country next month, clinical psychologist Jonathan Stea wants users to consider the bigger picture—that marijuana use is complex and research shows it can actually be addicting for some.

“I’ve been accused of being a representative of Stephen Harper or a spokesperson for Big Pharma, but I’m a clinical psychologist,” said Stea. “I have no conflicts of interest here other than what I see on a daily basis while treating addiction. I see a substantial minority of people that are addicted to cannabis.”

Stea, who works at Foothills Hospital in Calgary and has been treating patients with cannabis use disorder for 10 years, said studies estimate that one in ten people who use marijuana become addicted.

Although the vast number of pot users don’t become addicted, when taking into consideration how widespread cannabis use is and the potential for more users as society perceives it to be less harmful come legalization, that number is actually quite large and has potential to grow, he said.

Stea said cannabis addiction is defined by the Diagnostic and Statistical Manual of Mental Disorders (DSM-5) and one of the hallmark symptoms is the need for repeated use of the drug to feel good—or to avoid feeling bad—and how feeding this “brain-reward system” interferes with one’s life, both at work and socially.

Although cannabis addiction doesn’t have such severe symptoms as heroin, fentanyl, or cocaine, he said, it can nevertheless be very disruptive, and anyone feeling they can’t slow down or quit after repeated attempts should be taken seriously. However, he notes that pot addiction can be downplayed or overlooked in society.

Other addictive symptoms pot users can experience under the DSM-5 criteria include cravings, a sense of loss of control, compulsive use, negative consequences, habitual behaviours, and functional impairment.

Youth at greater risk for addiction

Among people who start using cannabis in adolescence, addiction rates rise to about one in six, or 17 percent.

“We know that younger people are at greater risk of experiencing cannabis-related harm, including the risk of developing cannabis use disorder or cannabis addiction,” said Amy Porath, the director of research at the Canadian Centre on Substance Use and Addiction in Ottawa.

But dependence is just one of the harms younger pot users can experience.

“For young people who are thinking of using, we really try to encourage them to put off use for as long as possible until they are older so they can preserve their brain health,” Porath said.

Porath, who has studied cannabis use disorder for 17 years and leads a team of researchers who help guide policy changes, said the human brain continues developing until age 25 and cannabis use could hurt ongoing development.

When it comes to more potent products with higher THC (the psychoactive ingredient in marijuana), she said there’s no evidence she is aware of that more THC leads to more addiction, but cautions users to be careful before consuming pot edibles or high-potency products because it can increase risks.

A CBC News report recently confirmed a spike in emergency room visits for cannabis overdoses, mostly from high-potency edibles. In Ontario, emergency room visits have almost tripled—from 449 in 2013-14, to nearly 1,500 in 2017-18, according to data collected by the Canadian Institute for Health Information.

‘All I wanted was to eat’

One toker who recently quit after 10 years of daily use told The Epoch Times he would get “the munchies” when he was stoned—a common side-effect among pot smokers—and put on a lot of weight.

“When I smoked weed all I wanted was to eat—I could eat a whole table [full of food],” said Douglas Sasaki, who moved to Vancouver from Brazil four years ago. “Now I can’t even eat half of what I used to eat.”

Sasaki, 26, decided to quit cannabis because he wants a healthier lifestyle. But aside from losing weight, he hopes his mind will be clearer so that he can better achieve long-term goals.

“After smoking so much for so long, maybe there is another side and without weed I can be better,” he said. “It’s mainly about my health, but also maybe in 10 or 15 years from now I will have more opportunities without it.”

Send us your thoughts on marijuana legalization by writing to newsdesk@epochtimes.com