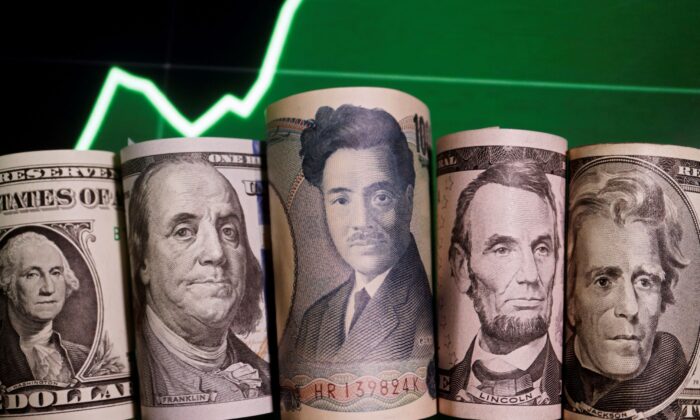 Yen Strengthens After Japan Intervenes for First Time Since 1998

LONDON—The Japanese yen strengthened on Thursday after authorities intervened in the foreign exchange market to shore up the battered currency for the first time since 1998, although trading was choppy.

The spread between the day’s high and low for the pair was the widest since June 2016.

The euro, Australian dollar, and pound also plunged against the Japanese currency, before regaining a little ground.

“We have taken decisive action,” vice finance minister for international affairs Masato Kanda told reporters, responding in the affirmative when asked if that meant intervention.

Confirmation of the intervention came hours after the BOJ decided to maintain low interest rates to support the country’s fragile economic recovery.

BOJ Governor Haruhiko Kuroda told reporters the central bank could hold off on hiking rates or changing its dovish policy guidance for years.

In contrast, central banks around the world, most notably the U.S. Federal Reserve, are raising rates aggressively and the policy divergence has weighed on the yen.

“Unless there is a clear shift in the fundamental backdrop driving Japanese yen weaker, the ability to turn the trend is limited,” said Derek Halpenny, head of global markets research at MUFG.

“The Ministry of Finance may see this as buying some time and hope that the Fed completes its tightening cycle by year-end, which may help to bring some degree of turn in the trend.”

Even after Thursday’s moves, the dollar is still up 23.4 percent against the yen this year.

In what is proving a very busy day for markets, the dollar earlier hit multi-year highs after the Federal Reserve surprised markets with hawkish interest-rate projections.

The dollar index—which measures the greenback against a basket of six other major currencies—rose as high as 111.81 for the first time since mid-2002.

Both made up a little ground in London trading, and with the stronger yen, the dollar index was last down 0.3 percent at 110.95.

The Bank of England raised its key interest rate to 2.25 percent from 1.75 percent on Thursday and said it would continue to “respond forcefully, as necessary” to inflation, despite the economy entering recession.

On Wednesday, the Fed issued new projections showing rates peaking at 4.6 percent next year with no cuts until 2024. It raised its target interest rate range by another 75 basis points (bps) overnight to 3 percent–3.25 percent, as was widely expected.

The dollar was already supported by demand for safe-haven assets after Russian President Vladimir Putin announced he would call up reservists to fight in Ukraine and said Moscow would respond with the might of all its vast arsenal if the West pursued what he called its “nuclear blackmail” over the conflict there.

The dollar and euro both climbed more than 1 percent against the franc, with the dollar last at 0.9798 and the euro at 0.974.

The Swiss National Bank raised its policy interest rate to 0.5 percent from the minus 0.25 percent level it set in June—only the second increase in 15 years.

“I think the outsized reaction in EUR/CHF was down to the view that SNB could do 100 basis points, following (Sweden’s) Riksbank earlier this week. I think the market reaction, the EUR/CHF rally, is a bit overdone,” said Chris Turner, global head of markets at ING.