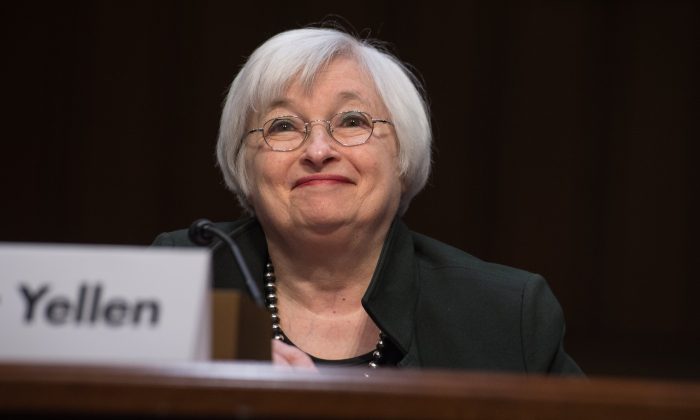 Janet Yellen at a Joint Economic Committee hearing on Capitol Hill in Washington, on Dec. 3., 2015. (Mark Wilson/Getty Images)
US

WASHINGTON—Federal Reserve Chair Janet Yellen told Congress on Thursday, Dec. 3, that economic conditions appear to be improving enough for policymakers to raise interest rates when they meet in two weeks—as long as there are no major shocks that undermine confidence.

Yellen said that even after the first rate hike, the Fed expects future rate increases will be at a gradual pace that will keep borrowing costs low for consumers and businesses.

In testimony before the Joint Economic Committee, Yellen warned that waiting an extended period of time to start raising rates would carry risks.

“Were the FOMC to delay the start … for too long,” she said, “we would likely end up having to tighten policy relatively abruptly to keep the economy from overshooting” the Fed’s goals for unemployment and inflation.

“Such an abrupt tightening would risk disrupting financial markets and perhaps even inadvertently push the economy into a recession,” Yellen said.

Fed policymakers meet Dec. 15–16. The Fed’s key short-term rate has been at a record low near zero for the past seven years.

Many private economists are forecasting that the first rate hike by the Federal Open Market Committee, the Fed’s policy panel, will be a modest quarter-point move, followed by four more quarter-point moves over the next year.

“Between today and the next FOMC meeting, we will receive additional data that bear on the economic outlook. These data include a range of indicators regarding the labor market, inflation, and economic activity,” Yellen told the JEC. “When my colleagues and I meet, we will assess all of the available data and their implications for the economic outlook in making our decision.”

The Labor Department will release its November employment report on Dec. 4. Analysts believe the data will be key in determining whether the Fed boosts rates this month.

Asked about the upcoming unemployment report, Yellen said the Fed will be watching for “a continued solid trend of job creation” that would indicate the economy has good momentum going forward.

Yellen repeated past comments that she believed two key factors keeping inflation below the Fed’s 2 percent target—the rise in the value of the dollar and falling oil prices—were likely to fade over time.

Private economists said Yellen’s remarks over the past two days sent a strong signal that the Fed is ready to start raising interest rates at its meeting this month.

Private economists said Yellen’s remarks over the past two days sent a strong signal that the Fed is ready to start raising interest rates at its meeting this month.

Gus Faucher, senior economist at PNC, said he was looking for a rate hike “barring much weaker data over the next couple of weeks.”

The Fed has left its target for the federal funds rate, the interest that banks charge on overnight loans, near zero since December 2008. It has used ultra-low borrowing costs as a way to stimulate economic activity and fight the worst recession since the Great Depression of the 1930s. The Fed has not raised the funds rate since June 2006.

Yellen said that the Fed currently anticipates that even after further improvements in the labor market and inflation, economic conditions are likely to warrant lower rates than normal “for some time.”

She said that a Fed move to start raising rates will be a sign of “how far our economy has come in recovering from the effects of the financial crisis and the Great Recession. In that sense, it is a day that I expect we all are looking forward to.”

Yellen spoke shortly after the European Central Bank announced that it was cutting a key interest rate and extending its stimulus program to enhance efforts to bolster the 19 European countries that use the euro currency. This action disappointed investors, who had been looking for stronger moves.