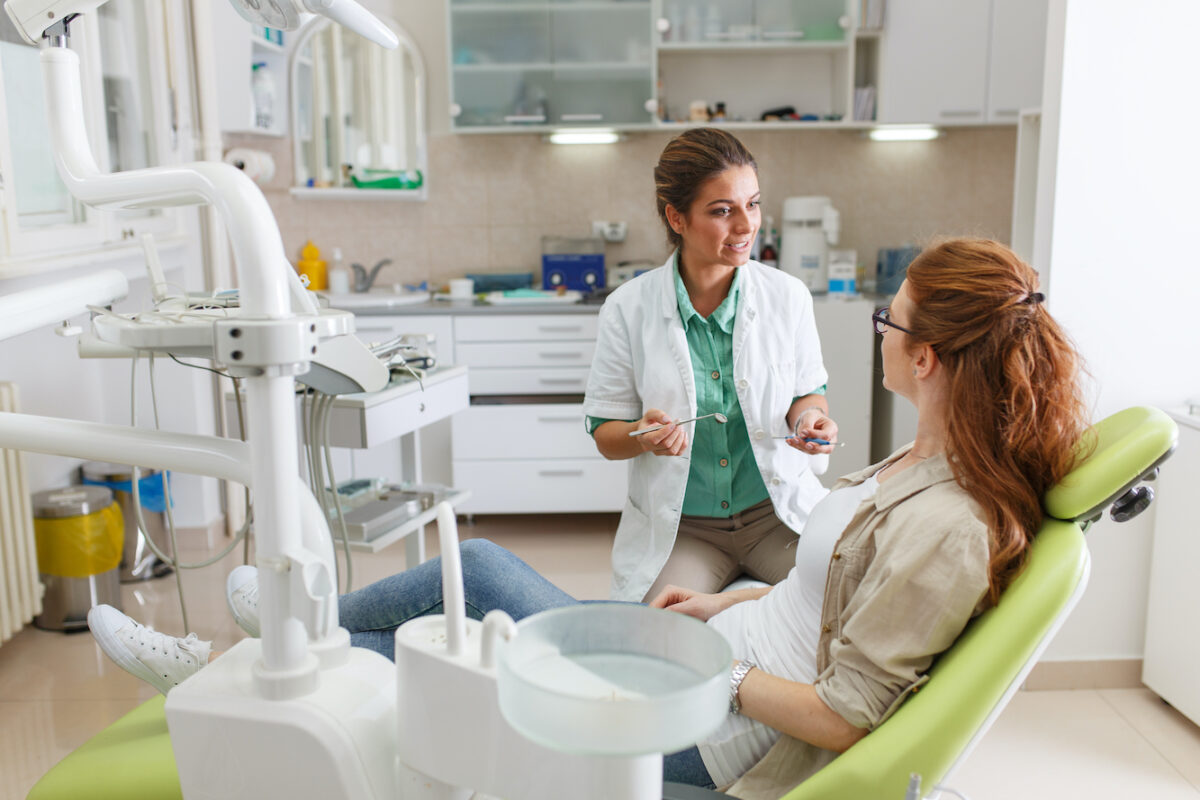 The health of our mouth has been linked to a number of diseases, and researchers think our oral microbiome may explain why.(BalanceFormCreative/Shutterstock)
Health Conditions

Would You Try Biological Dentistry?

Unlike most of us, Mandara Cromwell loves going to the dentist. Though she lives in Augusta, Georgia, Cromwell drives two hours each way to see her dentist in Greenville, South Carolina.

“In today’s dentistry, we’re doing it wrong,” said Cromwell, who has been engaged in health-related work for more than 45 years. “We really need to take a different approach.” Cromwell, the founder of Cyma Technologies (a company that manufacturers stress and pain-relieving devices), said the right approach is called biological dentistry.

If you’re not in a holistic health field, you may not have heard the phrase “biological dentistry.” Biological dentists believe that problems in the mouth are connected to a person’s overall wellness. These natural-minded dentists don’t just want to fix your teeth. Instead, biological dentists also try to help their patients optimize their health and well-being by treating the root causes of their oral symptoms.

“In Ayurvedic and Chinese medicine, the teeth are connected to all the major organ systems,” Cromwell told me. “When we do something natural and non-invasive to relax the body, focus on a healthy oral biome, and allow the release of toxic build-up, then the body has the ability to regenerate and take care of itself. That’s the premise of biological dentistry.”

According to Cromwell, when the oral biome is out of balance, harmful bacteria and other microorganisms can start to dominate. Eating highly processed foods, having high levels of stress (cortisol levels disturb the pH of the mouth), and other lifestyle factors encourage the overgrowth of unhealthy mouth bacteria, she said.

What Are Your Mouth Problems Trying to Tell You?

Oral health issues, such as bacterial overgrowth or a yeasty white coating on the tongue, are often connected to—and perhaps even causing—other health conditions. These health problems include heart disease, autoimmune conditions, and even cancer.

Several studies have found that people with poor oral hygiene who suffer from gum disease or tooth loss are often at higher risk for cardiovascular problems and strokes than people who have good oral hygiene. As early as 1996, scientists from Harvard School of Dental Medicine found that men with fewer teeth were at greater risk of heart disorders. Since then, as a team of Australian researchers explained in a 2017 study published in PLoS One, “there is increasing evidence linking periodontal disease with [cardiovascular disease] and its adverse outcomes.”

A 2019 review and analysis of 10 articles by Lithuanian researchers found a link between gum disease and rheumatoid arthritis. And in 2020, a team of researchers from Sichuan University in China found that certain characteristics of a person’s oral microbiome (that is, the make-up of bacteria in the mouth) were linked to pancreatic cancer. According to this study, published in the World Journal of Gastroenterology, when individuals had Streptococcus and Leptotrichia in their mouths, it was an indication of pancreatic adenocarcinoma. At the same time, individuals who had other strains of bacteria in their mouths seemed to be protected against cancer.

According to Robert H. Shmerling, a medical doctor and senior editor at Harvard Health Publishing, although many studies have shown a link between different health conditions and oral health, researchers aren’t sure if the harmful bacteria in the mouth are causing damage to other parts of the body, or if the bacteria in the mouth are an indication of a generally weakened immune system, or if there are other reasons for the correlation (smoking, for instance).

Though the question about cause and effect is still open, the paradigm of biological dentistry is to solve health problems related to the mouth and also resolve the patient’s underlying health issues.

Dr. Griffin Cole, who has been practicing biological dentistry in Austin, Texas, for more than 20 years, argues that traditional, mainstream dentistry may actually be dangerous.

At a health conference in Allen, Texas, in November 2021, Cole said nearly 50 percent of American dentists are still filling cavities with mercury amalgams, despite the well-known and well-documented dangers of mercury to human health.

Cole also pointed out that mainstream dentists mistakenly encourage their clients to use fluoride, which Cole said isn’t needed for any reason and shouldn’t be in the water.

A key aspect to biological dentistry, according to Cole, is undoing problems that may have been caused by mainstream dentistry. Cole encouraged the audience to learn about safe mercury removal and also educate themselves about no-drill cavity techniques and other techniques to preserve as much of the original tooth as possible when filling cavities. He argued that the best dentists are the ones who take their time with each patient, instead of seeing 20 to 25 patients per day, which, according to Cole, is the average for mainstream dentists.

Central Dentist, a practice based in Dallas, Texas, that specializes in holistic dentistry and functional oral health, was another biological dentistry practice at the conference. “The Central Dentist Way,” according to a handout offered to participants, includes the safe removal of mercury amalgams. Individual responses to mercury vary, but researchers have implicated exposure to mercury to a variety of very troubling health problems, including Alzheimer’s disease, kidney disease, and even depression.

For this reason, the International Academy of Oral Medicine and Toxicology created a set of recommendations for the safe removal of mercury amalgams, called SMART. This technique includes preparing the body for the mercury removal, implementing protective protocols for the patient and the dental team, and using replacement materials for the fillings that are nontoxic to the individual patient.

Biological dentists don’t advocate the use of fluoride, whether in toothpaste, tooth powders, or drinking water. While conventional dentists argue that fluoride helps strengthen and protect the teeth, biological dentists point out that fluoride is a known neurotoxin and that children who are exposed to fluoride at higher levels score lower on IQ tests than children who are exposed at lower levels. A 2012 systematic review published in the journal Environmental Health Perspectives conducted by scientists from Harvard’s School of Public Health and China’s Medical University in Shenyang analyzed 27 studies and found a strong indication that fluoride negatively affects children’s cognitive development.

A 2019 study combed 14 subsequent studies and found similar results. Dr. Philippe Grandjean, the study’s author, is a Danish-born environmental epidemiologist at Harvard University whose work focuses on the lifelong impacts of early exposure to toxic chemicals. Grandjean concluded that early-life exposure to fluoride was negatively associated with children’s brain abilities and that “safe exposures are likely to be below currently accepted or recommended fluoride concentrations in the water.”

Ozone is a reactive manmade compound that consists of three oxygen atoms. Its chemical formula is 03. Ozone is commonly considered harmful because, in its gaseous form, it can be irritating or even poisonous to breathe. Even small amounts of ozone can lead to chest pain, shortness of breath, throat irritation, and coughing, according to the Environmental Protection Agency.

To use ozone safely, dentists ensure it isn’t inhaled. It is applied topically to the teeth with suction used to keep it from entering the lungs. In this manner, dental patients can get the benefits of ozone without the potential consequences.

Biological dentists advocate for the use of ozone to fight infection, speed up healing, and help with sterilizing fillings and crowns. When used in biological dentistry, Cole said, ozone can be effective in fighting bacterial and fungal infections, as well as mouth sores and herpes. Biological dentists argue that ozone is a safe and effective treatment for preventing tooth decay and a host of other oral health problems.

If you want personalized dental care that looks at the problems you’re having in your mouth as part of your overall health, holistic (aka biological) dentistry may be right for you. As with other individualized health modalities in the United States, however, the barrier to seeing these kinds of dentists is often the cost.

But Jean Roorda, 44, who lives in Candler, North Carolina, says biological dentistry is worth it. Roorda’s family has always avoided conventional dentists, she says. The mother of three sons (ages 24, 12, and 7), Roorda insists that seeing a biological dentist will ultimately save you money.

“They address the cause of the problem, so less intervention is necessary,” she said. “Prevention might be more expensive up front, but it’s so much more rewarding. It always costs more money in the long run if you need more fillings and more crowns and more roots canals and all of that. And [if you go to a biological dentist] you get to keep your teeth,” Roorda laughed. “What’s better than that?”

Jennifer Margulis, Ph.D., an award-winning science journalist, book author, and sought-after speaker, is a frequent contributor to The Epoch Times.