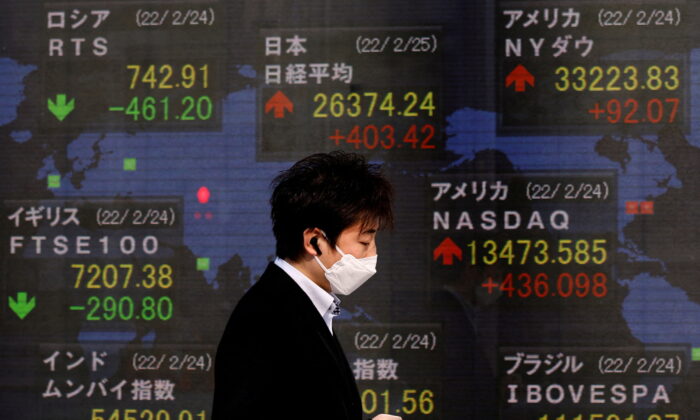 A man wearing a protective mask, amid the coronavirus disease (COVID-19) outbreak, walks past an electronic board displaying stock market data outside a brokerage in Tokyo, Japan, on Feb. 25, 2022. (Kim Kyung-Hoon/Reuters)
Stocks

LONDON/TOKYO—World stocks headed for a fourth straight week of gains on Friday as investors scaled back views on how far U.S. interest rates and inflation can climb, while oil recouped some of the previous week’s losses.

A slight easing of inflation readings drove global stocks higher and capped a rising dollar this week, though a string of Fed speakers dampened expectations of the central bank going slow on further policy tightening.

“Inflation seems to have turned and that was positive, the growth stocks are outperforming again,” said Matthias Scheiber, global head of portfolio management for multi-asset solutions at Allspring.

“I wouldn’t be surprised if we have a good finish into the weekend,” he added, though he said investors remained cautious.

MSCI’s world stock index was up 0.1 percent and was showing a 1.8 percent rise on the week.

European stocks rose 0.35 percent and were heading for weekly gains of more than 1 percent. Britain’s FTSE climbed 0.56 percent and was eyeing a near-1 percent rise on the week.

Investors are focused on further inflation data later on Friday, with the publication of the University of Michigan’s preliminary survey of consumers for August.

Odds of a 75 basis points U.S. hike in September were as high as 68 percent earlier in the week, but are now around 34 percent, where they were a week ago.

However, San Francisco Federal Reserve Bank president Mary Daly said on Thursday that while a 50 basis point rate hike next month “makes sense” given economic data, she’d be open to a bigger hike if necessary. The rate is currently in the 2.25 percent–2.5 percent range.

Chicago Fed President Charles Evans said he believed the Fed would likely need to lift its policy rate to 3.25 percent–3.5 percent this year and to 3.75 percent–4 percent by the end of next year, in line with what Fed Chair Jerome Powell signaled after the Fed’s latest meeting in July.

In addition, Minneapolis Fed President Neel Kashkari said he hadn’t “seen anything that changes” the need to raise the Fed’s policy rate to 3.9 percent by year-end and to 4.4 percent by the end of 2023.

“There are too many uncertainties to know the path of oil and other CPI prices ahead, but the peak of inflation is clearly behind us,” Nikko Asset Management chief global strategist John Vail wrote in a note.

“The key question is how far and how fast it will fall. We believe inflation will be quite sticky and central banks will need to be more hawkish than consensus.”

The dollar gained 0.24 percent against a basket of currencies while the euro lost 0.26 percent to $1.0289. Sterling dropped 0.36 percent against the dollar to $1.2170 after data showing British GDP fell 0.1 percent on the quarter.

Brent crude was headed for a weekly climb of more than 3 percent, recouping part of last week’s 14 percent tumble, as recession fears eased, though an uncertain demand outlook capped gains.

By Carolyn Cohn and Sam Byford